The fifth and last live results show of America’s Got Talent Season 17 took place Wednesday, and while the previous night’s qualifying round was stacked with talent — so much so that Simon Cowell said it actually could’ve been mistaken for the season finale — the two obvious frontrunners made it through, just as I’d predicted: Lebanese dance troupe Mayyas (Sofia Vergara’s Golden Buzzer) and Australian pole-dancer/multimedia artist Kristy Sellars.

We cannot wait to see how Mayyas and @kristysellars0 will WOW us in the #AGT finals! 🤩 pic.twitter.com/WHBrEcJk1y

But next week’s finals won’t feature just a top 10; instead, there will be a top 11. During Wednesday’s episode, each of the judges — who’d had zero input during the live shows due to this season’s controversial revamped format — put forward a wild-card act. Viewers then had just five minutes to instantly vote one of those four contestants into the finale.

Simon, interestingly, chose Players Choir, a troupe of singing former NFL stars. Howie Mandel, claimed he had three acts in mind, but ultimately went with corporate comedian Don McMillan, (power)pointing out that Don had placed a respectable third in his qualifiers week and missed making the finals by only 2% of the public vote. Heidi Klum went with her Golden Buzzer act, singer-songwriter Lily Meola, who’d also just missed the finale with her third-place showing last week. (Interestingly, none of the judges nominated this week’s near-misses, singer Kristen Cruz, acrobatic team Urbancrew, or rapping magician Mervant Vera, who rounded out Wednesday’s strong top five.) 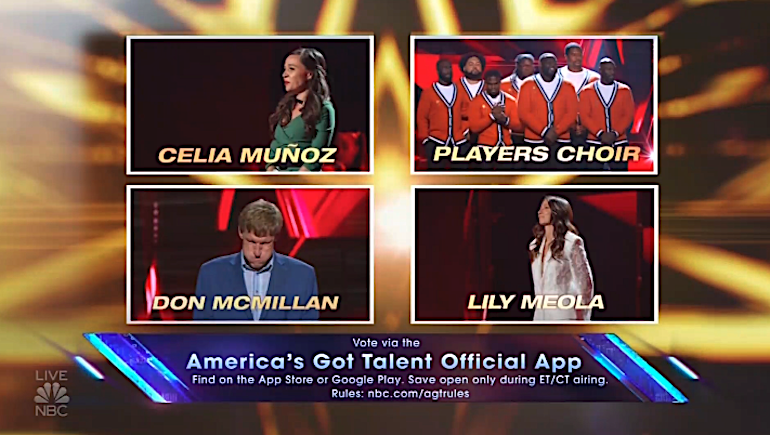 However, clearly the most popular wild-card nomination came from Sofia, who chose fellow ventriloquist Celia Muñoz. Celia was a standout in her qualifiers week with a Grease-themed tribute to the recently dearly departed Olivia Newton-John, and her elimination was arguably the biggest shocker of this entire season. “I think she deserves to be here, because I think her talent is very spectacular and she’s very creative,” Sofia explained.

The 11th spot has been filled. Celia Munoz is your wildcard pick! ✨ #AGTpic.twitter.com/Nrr4IRSbbf

So now, Mayyas, Kristy, and Celia will be joining saxophonist Avery Dixon, country music acts Drake Milligan and Chapel Hart, teen singer Sara James, augmented reality team MetaPhysic, magicians Yu Hojin and Nicolas Ribs, and stand-up comic Mike E. Winfield in next week’s finals. Simon has predicted that it will be the closest competition in AGT history — and if a second-chancer like Celia wins, it’ll definitely be historic. Additionally, Mike could be the first comedian to ever win America’s Got Talent, and we’ve certainly never seen an AR act or sax player win the show.

We will also have artists representing Lebanon, Australia, Spain South Korea, and France as well as the United States, so this will be more like World’s Got Talent. So, watch next Tuesday, as the top 11 take the international stage.

· ‘One of the strangest evenings we’ve ever had’: Everything goes wrong on ‘AGT’

· Mayyas honor late ‘AGT’ contestant with stunning routine: ‘What really got us to audition this year is Nightbirde’

· Nick Cannon on quitting ‘America’s Got Talent’: ‘One of the best decisions I ever made in my career’