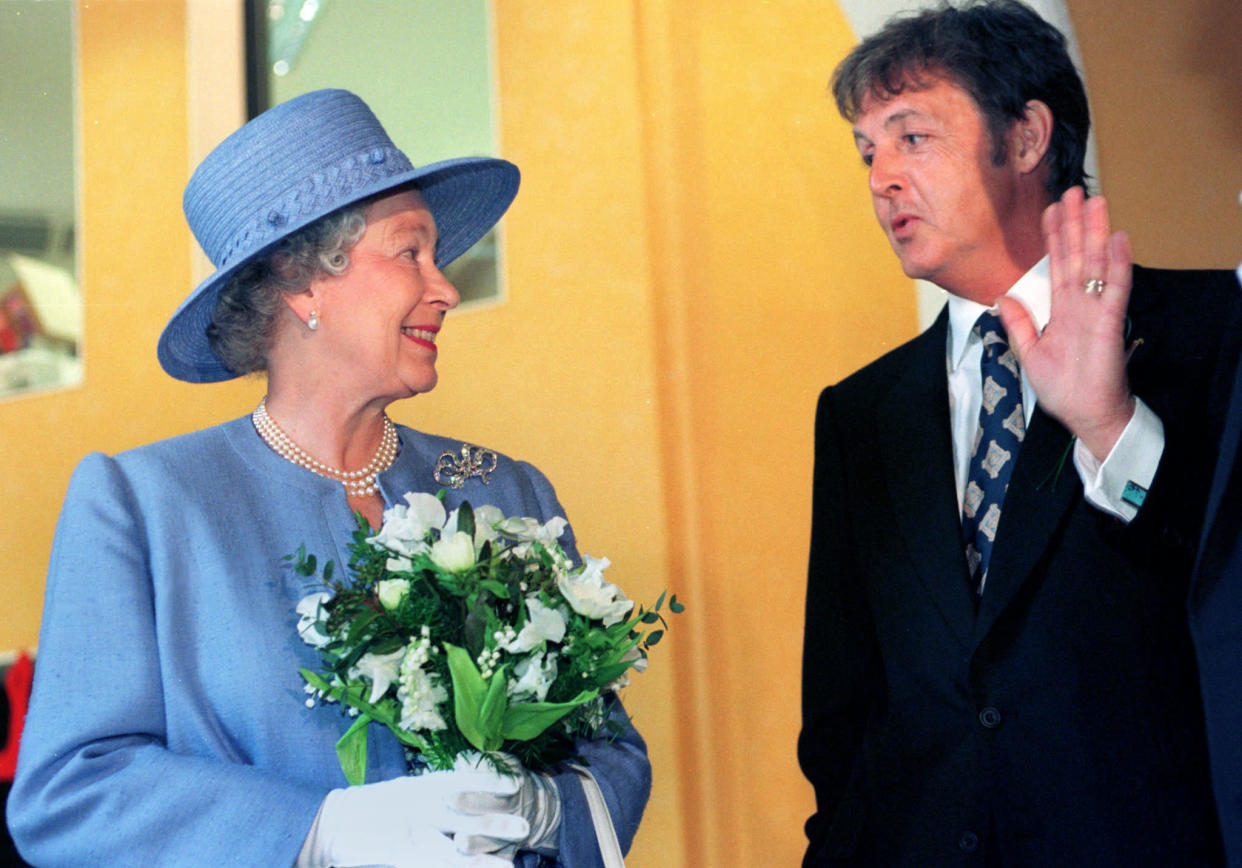 She may have been born in the era of ragtime, but Queen Elizabeth II’s reign began with the birth of rock ‘n’ roll.

Her coronation in 1953 coincided with the rise of American stars like Chuck Berry and Little Richard, who would soon influence the U.K. artists who would make Britain the epicenter of both music and cool a decade later. The long-reigning Elizabeth, who died Sept. 8, 2022, at age 96, came into her own in the mid-1960s, just as the British musical invasion overtook the world.

Right when the U.K.’s empire saw its Colonial power collapse once and for all, a young wave of British stars, led by the Beatles, began to colonize global culture. From that point on, successive waves of U.K. musicians ruled the world of song and style, from the Rolling Stones and Led Zeppelin in the ‘60s, to punk and new wave in the ‘70s and ‘80s, to Amy Winehouse and Adele today.

Though far from a hipster herself, Queen Elizabeth recognized the economic, and cultural, power of British musicians early on. In November of 1963, three months before the Beatles exploded on The Ed Sullivan Show, the Fab Four played the Queen’s Royal Variety Performance, a televised, annual charity event. Elizabeth’s extended family enjoyed the youthful power of the songs they performed, like “From Me to You” and “She Loves You,” and laughed heartily at a famous jibe lobbed their way by John Lennon. “The people in the cheaper seats, clap your hands,” he instructed the crowd. “The rest of you, just rattle your jewelry.”

Two years later, the crown named John, Paul, George and Ringo Members of the Order of the British Empire. The honor seldom went to entertainers at that time, but the Queen knew the P.R. value, and youthful resonance, her country would gain by honoring “the boys.”

Years later, in 1997, Queen Elizabeth knighted Paul McCartney, ushering in a wave of musical stars recognized by her highness, including Cliff Richard, Tom Jones, Bono, Bob Geldof, Mick Jagger, Shirley Bassey, and David Bowie (who declined the honor). The Queen also bestowed a somewhat lesser honor on a wide range of other rockers — namely, the CBE (Commander of the Order of the British Empire). She awarded that to Roger Daltrey, the Bee Gees, Rod Stewart, Eric Clapton, Sting, Annie Lennox, and Robert Plant. 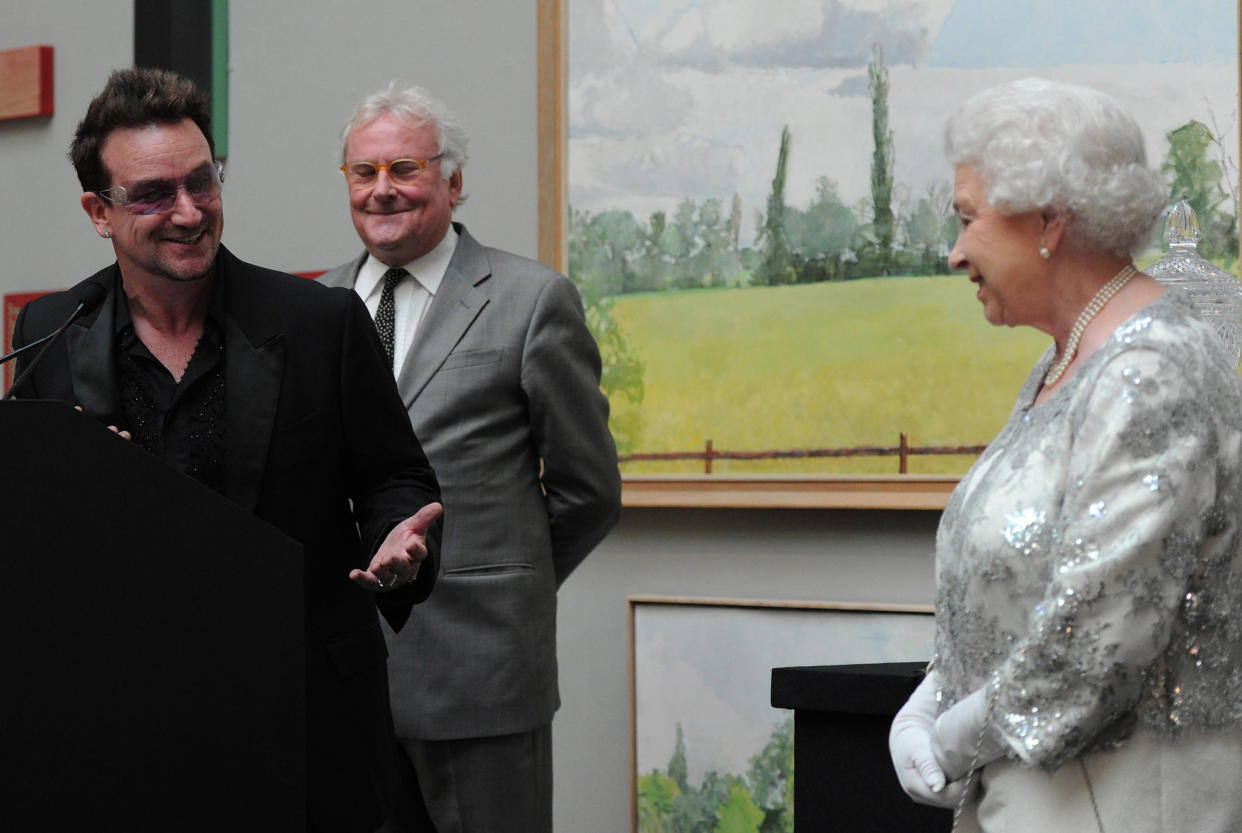 Over the decades, the love between music and the monarch has not always been mutual, to say the least. Some of the best-known songs that reference Elizabeth and her crown couldn’t be more condemning. The Sex Pistols’ most famous song, “God Save the Queen,” brays that the monarch “ain’t no human being.” For good measure, they released the song on the day of her Silver Jubilee. The Smiths wistfully imagined Elizabeth’s hanging in “The Queen Is Dead,” while songs by the Stone Roses (“Elizabeth My Dear”), Billy Bragg (“Rule Nor Reason”), and Primal Scream (“Insect Royalty”) have treated the royal family as irrelevant and costly parasites.

Characteristically, the Beatles were more diplomatic in their musical references. A cheeky, hidden track on Abbey Road, titled “Her Majesty,” called Elizabeth “a pretty nice girl,” while she was blandly alluded to, as well, in the 1969 song “Mean Mr. Mustard” and in 1967’s “Penny Lane.” To retroactively remove even the slightest sting, McCartney performed “Her Majesty” for the Queen at her Diamond Jubilee, closing out that starry 2012 show. The Jubilee concert, viewed on TV by more than 74 million people worldwide, featured consistently reverent salutes from over 25 top music stars, including Annie Lennox, Stevie Wonder, Robbie Williams, and Elton John (who saluted her longevity with “I’m Still Standing”). Younger stars, like will.i.am and Ed Sheeran, delivered hosannas as well.

In a 2016 documentary created for the Queen’s 90th birthday, the palace revealed her favorite songs. They included show tunes, like “Oklahoma” and “Anything You Can Do” (from Annie Get Your Gun), the veddy British song “White Cliffs of Dover,” sung by Vera Lynn, as well as hymns, like “The Lord Is My Shepard.” Elizabeth’s top 10 list did include one newer piece: “Sing,” which had been penned by Take That’s Gary Barlow and Sir Andrew Lloyd Weber for the Diamond Jubilee.

In the documentary, the monarch’s cousin, Lady Elizabeth Anson, commented that “the Queen is a fantastic dancer. She’s got great rhythm.” More importantly, she possessed a keen sense of the raw power that homegrown music could bestow on the country she loved.

Girlfriend of Odessa Carey vows to stand by her