Royal fans stayed up all night to read Prince Harry’s memoir after it finally went on sale at midnight in the UK – but bookshops remain quiet this morning after its launch appeared to be something of a damp squib.

Only a small crowd gathered outside WH Smith in Victoria station, central London, when it opened at midnight to sell the first physical copies of the controversial autobiography.

And in the hours that have followed, the reaction on social media has been somewhat tepid, with a mere handful of people revealing how they had queued to get their hands on a copy.

One wrote: ‘Got 2 copies of the new Prince Harry Spare book! One for me, one for my beloved. Went to WHSmith midnight opening after I finished work. Will be up all night reading. #HotOffThePress #PrinceHarry #Spare’ 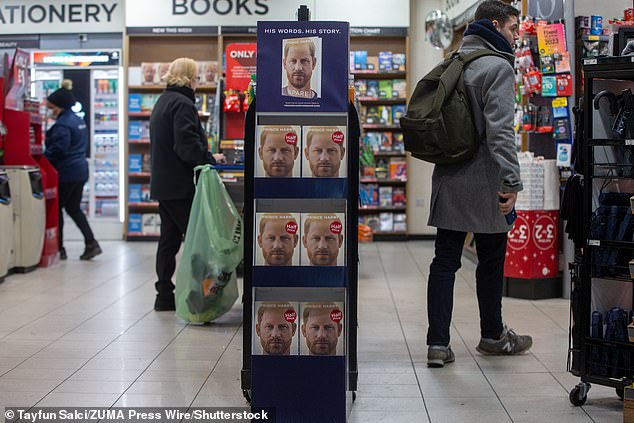 The official release of Prince Harry’s memoir, Spare, appears to have been something of a damp squib, with minimal enthusiasm from fans 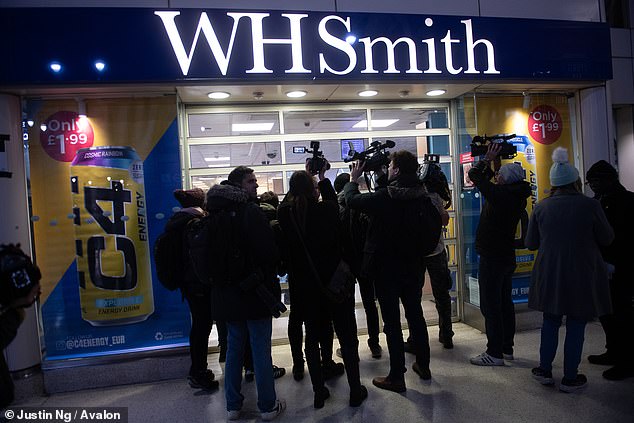 Only a small crowd gathered outside WH Smith in Victoria station, central London, when it opened at midnight to sell the first physical copies of the controversial autobiography 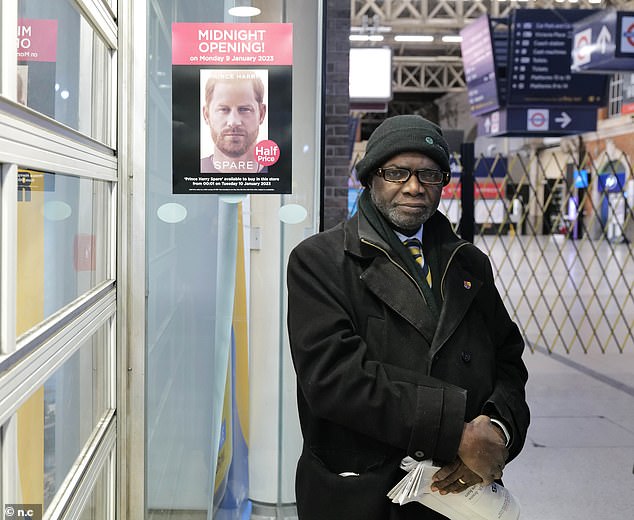 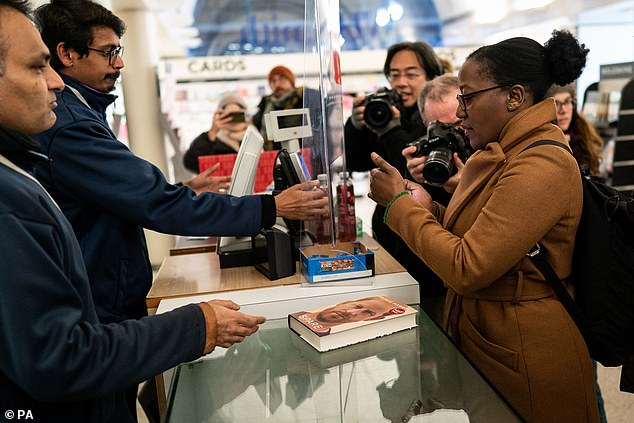 Another said: ‘Just after midnight in UK and my kindle version #spare has arrived. Let’s go.’

A third added: ‘I’ve only read 50 pages so far, and I’ve laughed and cried. It’s quite an engaging read. I hope everyone read it for themselves in full and make their own judgement.’

The majority of the book’s most shattering revelations have already been documented, through the Duke of Sussex’s PR blitz, with interviews with Tom Bradby and Anderson Cooper, as well as the leaking of a Spanish version of the memoir.

Many claimed there were in fact more journalists at midnight launches of Spare than customers, with those who did turn up gathering around stacks of the book, which were sitting on a table wrapped in sealed black packaging.

The first customers were handed copies as photographers captured the moment before the staff started putting half price stickers onto copies and unloading them onto specially-designed shelving units near the front of the shop.

Professor Chris Imafidon, chairman of the Excellence in Education charity, from Epping, Essex, who was first in line and picked up three copies, said he wanted to hear the story ‘from (the) horse’s mouth’.

Queuing outside the shop just before midnight, Mr Imafidon, said that he had been waiting in Victoria station since about 9.30pm to get his hands on a copy.

Mr Imafidon said he is ‘extremely curious’ as to why Harry left the institution, adding: ‘I’m more of a fan of the royal family than the individuals because the royal family have done more work for me and my charity than any political office holder.’

He said he is ‘dazed’ by reports of how much detail the duke has gone into about private family moments.

‘Why? Why? You don’t need that to sell. You would sell a book if you’re Diana’s hat or Diana’s dog or Diana’s… if you’re linked to Diana you will still sell. Why would you go to that distance?’

‘I really want to know from (the) horse’s mouth,’ he continued, adding that he hopes the book is in Harry’s first person voice not in the third person.

‘I really want to know why the young man would leave the country he loved, he lived in and was ready to die for, because he went to war.’ 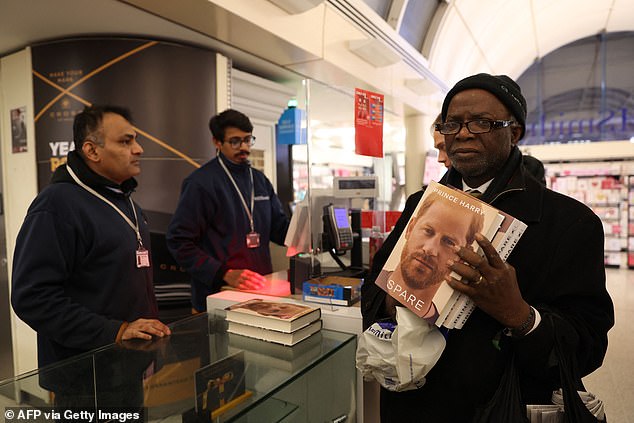 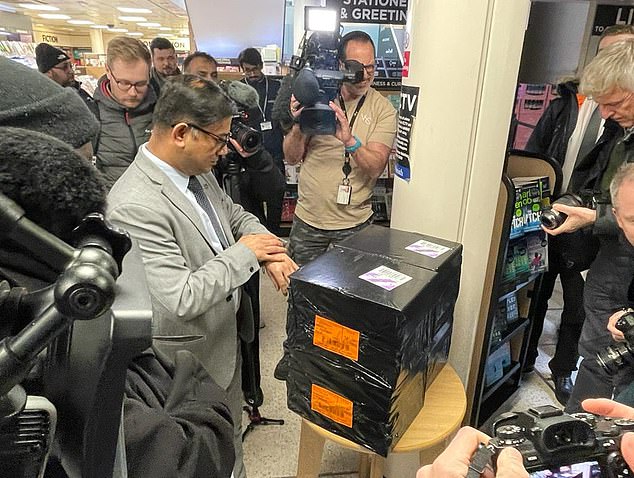 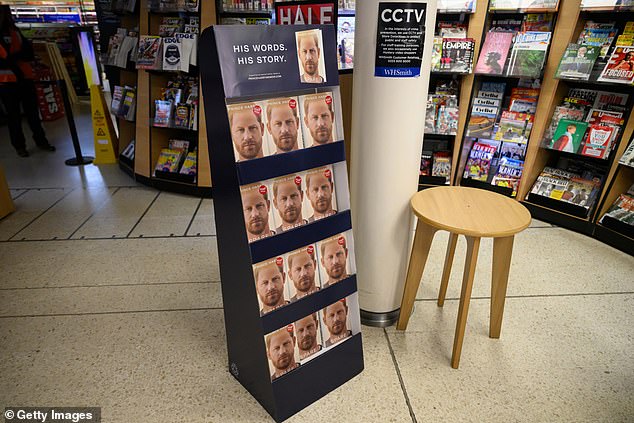 Also in the queue was bartender Sasha Pursell, 27, who has moved to London from Melbourne, Australia.

Waiting outside the shop, Ms Pursell said: ‘I’m just intrigued. I’ve heard so much press about the book and it’s also just a bit exciting – I’ve never been to a midnight release.

‘I just thought: ‘You know what, I’ve just finished work. It will be a bit of fun to go over and buy the book that I want to read.’

Asked about the criticism surrounding the book, she said: ‘Yes it can be seen as a betrayal to the royal family but at the same time, I feel like a lot of lies have been spewed about him.

‘It can go both ways. I don’t think either party is in the right or the wrong.’

Meanwhile, a savvy seller is cashing in on Harry’s bashing of the royals by selling copies of the book for more than four times the price on eBay.

The recommended retail price in £28, but the dealer has already sold seven copies of Spare and currently has another five in stock – flogging them on the auction website for a whopping £117.96.

Amid the cost of living crisis, they are also offering a ‘finance deal’ of 12 monthly payments of £10.50 – taking the total amount to £126 per copy.

The seller, from Glasgow, Scotland is offering free delivery by 18 January.

World of Books says it’s nearly sold out of the title – currently selling for £33.39 – while WH Smith and Amazon are both selling Spare for £14 – half the original price. 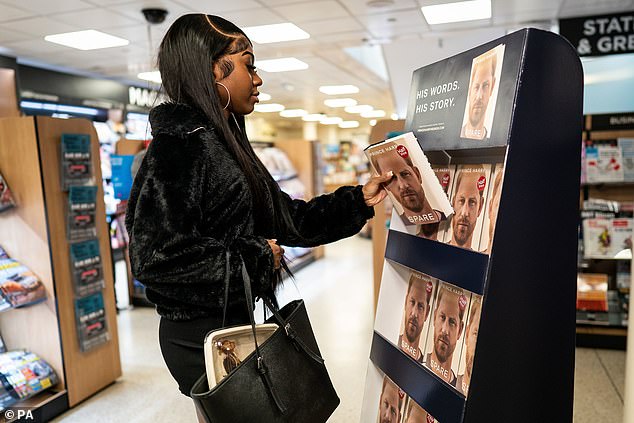 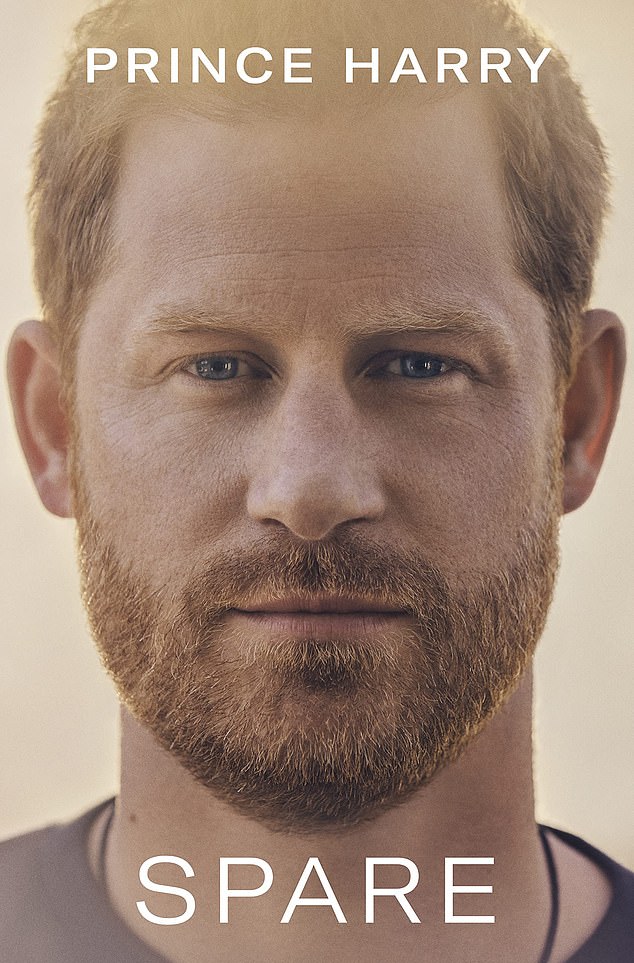 The long-awaited 416-page book is awaiting shoppers today and is being sold at half-price for £14 in Waterstones, WH Smith and on Amazon

The release comes after the Spanish edition of the book En La Sombra (‘In The Shadow’) was leaked on February 5, despite ultra-secure arrangements in place, and  after a set of tell-all interviews.

It was pulled from the shelves within hours but not before the world had gained access to its contents, detailing tensions between Harry and other members of the royal family and personal stories about the Prince’s life.

The ‘explosive’ pages include accusations of a physical fight with his older brother Prince William at Nottingham Cottage in 2019, as well as a further disagreement shortly after the Duke of Edinburgh’s funeral in 2021. Kate also comes under fire.

The Duke of Sussex describes a stand-up row that ended with the Prince of Wales grabbing him by the collar and throwing him to the floor, shattering a dog bowl with his back.

Harry also includes personal stories, admitting to drug use, having a frostbitten penis at William and Kate’s wedding and detailing how he lost his virginity.

It is dedicated to his wife Meghan, children Archie and Lilibet, and his late mother Diana and is being published in 16 languages.