Singapore: Australian Border Force has delivered a message by transporting 46 Sri Lankan men home on its largest patrol vessel – the first time people fleeing the bankrupt nation for Australia have been returned by sea and not air.

The 110-metre Ocean Shield ship docked in the Port of Colombo on Friday with the men on board after they were intercepted in Australian waters on July 21. 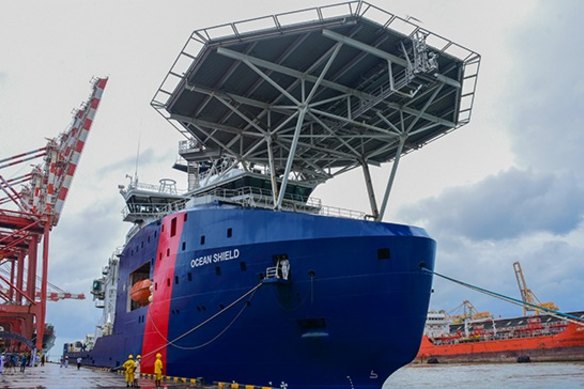 It brings to 183 the number of Sri Lankan people who have been sent back by the ABF since boats began trying to reach Australia in May as the economic crisis on the island nation worsened.

Until Friday, they had all been flown back to Colombo by Australian border officials but the ABF decided upon a different mode of transport for the latest attempted arrivals, keen to issue a very public signal that those trying to get to Australia by boat would be stopped.

“I don’t know why they brought them by sea but I think it gives a message to the people who want to go by these illegal methods,” said Sri Lanka Navy spokesman Captain Indika De Silva.

He said the 46 men had set off from Sri Lanka on July 6 and were handed over to police and immigration officials after disembarking from the ABF ship on Friday. 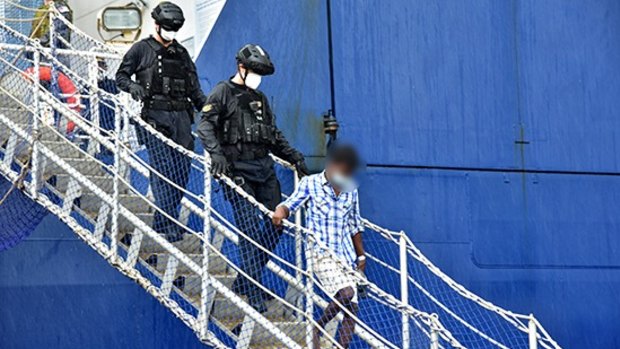 One of the Sri Lankan men is led off the Ocean Shield in Colombo on Friday.Credit:Sri Lanka Navy

The Labor government has stressed it will not soften its border stance after returning to power and Home Affairs Minister Clare O’Neil paid a visit to Colombo in June to offer more help to Sri Lankan authorities to stop boats in in their waters.

She said she did not comment on operational matters but added in a statement on Friday: “Operation Sovereign Borders is Australian government policy. Every person who has tried to make it to Australia by boat since I have been Home Affairs Minister is now back in their home country.”

The ABF said in its monthly report last week that it had stopped four boats from Sri Lanka in June with 125 people on board, the highest monthly tally of vessels intercepted in seven years.

A fishing trawler carrying 12 men from Negombo, north of Colombo, was earlier pulled up near Christmas Island on May 21, the day of the federal election.

Since May, there have also been 15 boats attempting to leave Sri Lanka illegally that have been stopped by its navy including some with children on board. A total of 701 people have been arrested on those boats and a further 210 arrested on land with the assistance of police, navy spokesman De Silva said on Friday.

Australia is providing tactical assistance and training to Sri Lanka’s navy, which already uses two retired Australian patrol boats that were given to it when Operation Sovereign Borders came into effect under Tony Abbott in 2013.

The Albanese government has also donated more than 4000 GPS devices to help Sri Lankan authorities in monitoring activity in their own waters.

The Sri Lankans attempting to make it to Australia have been escaping a devastating economic meltdown in the south Asian nation, which has run out of foreign currency reserves and where inflation last month rose to a record 60.8 per cent.

Months of shortages of fuel, food and other essentials, as well as surging prices, also triggered a political upheaval that led to the resignations of president Gotabaya Rajapaksa and prime minister Mahinda Rajapaksa.

Gotabaya Rajapaksa fled the country when thousands of demonstrators stormed the presidential palace last month and has since been in Singapore, which has permitted him to stay as a private citizen in the city-state until next Thursday.

New leader Ranil Wickremesinghe, who was elected by MPs to serve the rest of Gotabaya’s presidential term until 2024, has dismantled the sprawling protest camp that had been set up outside the presidential office for months.

He is negotiating a bailout with the International Monetary Fund but in speech to parliament on Wednesday warned Sri Lanka was “facing an unprecedented situation” and there was much difficulty still ahead.

“We are in great danger,” he said.

A spokesman for the ABF said it did not comment on operational matters.

Blackstone adds Alphabet CFO Ruth Porat to its board

Dark secrets of the cast of Jersey Shore