More than 90 per cent of Victorians at high risk of contracting coronavirus have avoided getting tested for COVID-19 when they have symptoms such as a sore throat, runny nose and a cough.

Shame and stigma around contracting COVID-19 is fuelling hesitancy to get tested for the virus, particularly among young Australians and migrant communities, new research has found. 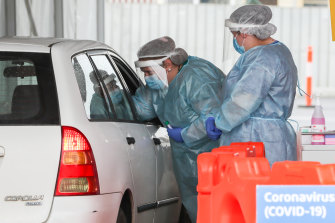 The research published by medical research body the Burnet Institute and the Peter Doherty Institute for Infection and Immunity found 93 per cent of Victorians examined did not get tested on at least one occasion when they had ailments such as sore throat, runny nose and cough.

The study analyses adherence to government COVID-19 directions among people considered most at risk of contracting coronavirus.

“When we spoke with community members, fear, anxiety and stigma played a prominent role in their decision to get a test,” Alisa Pedrana, a senior research fellow at the Burnet Institute, said.

“We have been noticing this pattern where people were reporting symptoms for COVID and, most commonly, it was two or more symptoms, but they weren’t actually getting tested for the virus.

“It could be three to five days that they’re delaying that testing and often that’s when they are their most infectious.”

Dr Pedrana said 85 per cent had initially delayed getting a test because they suspected their symptoms might be unrelated to COVID-19, including people who believed their headache or fatigue could be related to a chronic illness.

She said researchers found that media portrayals of people who had tested positive as “selfish, irresponsible or reckless” had left some young people feeling anxious they would be judged or ridiculed if they tested positive.

A lack of private transport and casual work constraints also played a significant role in young people avoiding or delaying getting tested, she said.

More than 11,800 tests were conducted in Victoria on Friday, compared with 21,464 for the same day of last month.

Dr Pedrana said normalising testing among high-risk groups was critical in minimising the spread of any COVID-19 outbreaks.

“When they either see young people or people from their communities going and getting tested, or talking about getting tested, that normalises those processes,” she said.

As part of the study, roughly 500 Victorians who are at heightened risk of contracting coronavirus – including aged care and healthcare workers, people in their teens or 20s, and people from culturally and linguistically diverse communities – were examined between September and February.

“Until the global community gets the vaccine coverage right up, we’ll still have the ongoing threat of outbreaks,” Dr Pedrana said. “Testing is one of our key defences.”

Australian data confirms coronavirus is more common in younger adults. People aged 20-29 have continually had the highest rates of COVID-19 cases and frequently been blamed for fuelling spread.

Findings from the latest research follow data released in late 2020 showing the majority of Australians with a sore throat and runny nose were not seeking a coronavirus test, despite government advice they should get swabbed.

The testing rate for people with mild symptoms continues to hover at about 20 to 35 per cent, according to FluTracking, a project that surveys about 50,000 people each week for signs of illness.

Culturally and linguistically diverse communities were among those hardest hit by the virus during Victoria’s deadly second wave in 2020, with clusters engulfing nine public housing towers, resulting in more than 3000 residents being confined to their flats until the outbreaks were controlled.

Catherine Bennett, chair in epidemiology at Deakin University, said much had been learnt since the second wave about how to reach migrant communities and encourage testing.

“It was one of the areas where it was very late in the piece in Victoria that we really started to build those relationships with the community and particularly embedded in public health units in local communities, and I don’t think we have seen the full impact of that work yet,” she said.

Young people were often less likely to get tested because they frequently had very mild symptoms, Professor Bennett said.

As Australia opened up further there would be more incentive for everybody to get tested.

“If testing becomes more about keeping us open than trying to close down outbreaks, if it becomes about things like travelling … there will be enough of a positive bonus for doing those things that people will engage and realise if enough people do it, we can keep doing it,” she said.

Victimization vs. honor in Atlanta: Culture clash in voter-law furor

Primark challenges people to spot the differences in these Winnie the Pooh scene, so can YOU find them all?