Solomon Islands Prime Minister Manasseh Sogavare says he will accept Australia’s offer to fund his national elections as the country’s parliament voted to delay the timing of the next poll.

The Solomon Islands parliament on Thursday passed legislation delaying the next general election despite the objections of opposition party members who have accused Sogavare of a “power grab”. 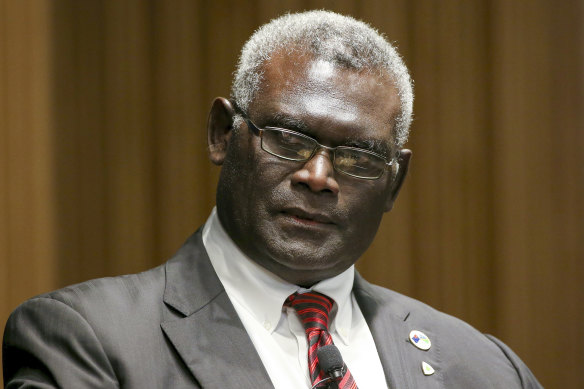 Solomon Islands Prime Minister Manasseh Sogavare has been accused of a “power grab”.Credit:AP

Sogavare said he wanted the legislation to be passed on Thursday because of the risk of protests. The bill seeks to change the constitution to allow the election to be delayed from 2023 until 2024.

He argued that the Solomon Islands cannot successfully host both the Pacific Games and an election in 2023 because of logistical requirements.

Sogavare previously argued that the Solomon Islands could not afford to hold the Pacific Games, a regional athletics meeting for which China is building seven venues and stadiums, and a general election in the same year.

Australia on Tuesday offered to fund the election, prompting a rebuke from Sogavare who said the timing of the offer was “foreign interference”.

He told parliament on Thursday he would nonetheless accept Australia’s funding offer after parliament passed the bill.

Opposition members have questioned Sogavare’s justification for seeking to postpone the election.

“There was never any need to choose between holding the elections and hosting the Pacific Games,” opposition leader Matthew Wale said.

He said that voters he had consulted had rejected delaying the election.

“There is no worthy reason but a power grab by the prime minister,” he said.

Controversy over the delay comes amid concern among opposition parties about Sogavare’s relationship with China, which provides a fund through which he distributed $3.78million to 39 out of 50 members of parliament in 2021.

Another opposition member opposed to delaying the election, Alfred Efona, said the Pacific Games should not be the reason “for us to adopt any communist ideas, behaviours and approaches hostile to the way we treat our democratic practices including the voice of the people”.

Sogavare denied any democratic principles have been breached by changing the constitution.

Anti-government riots in November were quelled by Australian police working with Solomon Island forces under a long-standing security arrangements.

Jennifer Lawrence Reveals The One Regret She Has About Wedding Planning