Hundreds of recent Tesla buyers stormed the automaker’s stores and showrooms across China after surprise price cuts were announced over the weekend.

The demonstrators slammed the sudden discounts of the Tesla Model Y and Model 3, claiming they had missed out on the price reductions, ranging from between 13 percent and 24 percent of the original cost.

Tesla is battling slowing EV sales in China amid fierce competition from domestic rivals including BYD and Li Auto. 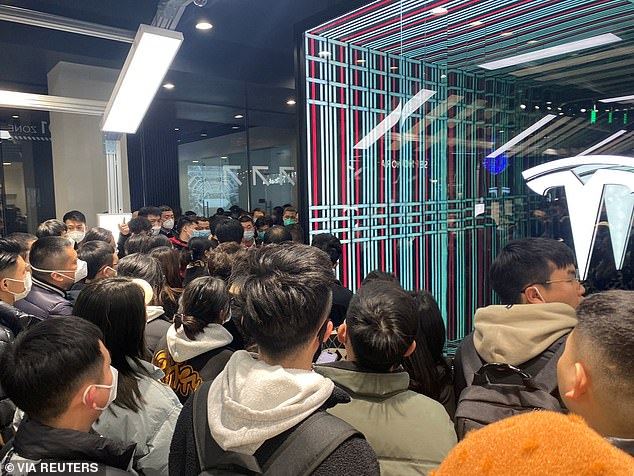 Protesters at a Tesla showroom in Chengdu, Sichuan, China, on January 6, 2023 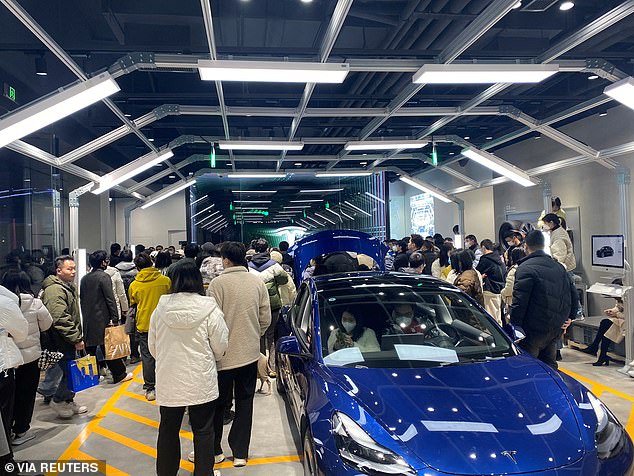 Crowds gather at a Tesla showroom in Chengdu, Sichuan, China, on January 6, 2023. The demonstrators slammed the sudden discounts of the Tesla Model Y and Model 3, claiming they had missed out on the price reductions

Police have reportedly mediated talks between the disgruntled car owners and Tesla staff, who have agreed to address demands by January 10.

Angry Chinese owners who bought Tesla cars in late 2022 and missed out on the additional discount said they were waiting for a response from the company.

Tesla has yet to issue an official statement.

Some of the buyers in China said they had been led to believe that the further discounts would not be coming. Many were also looking to take advantage of a nation-wide EV subsidy that expired at year end.

Chinese state media have largely opted not to cover the protests.

Comments on Chinese social media were largely negative towards the protesters, with many arguing they should have understood the terms of the contract.

‘I feel ashamed for them protesting after Tesla cut the prices,’ a popular law blogger named Wind Blows commented on his Weibo social media account. 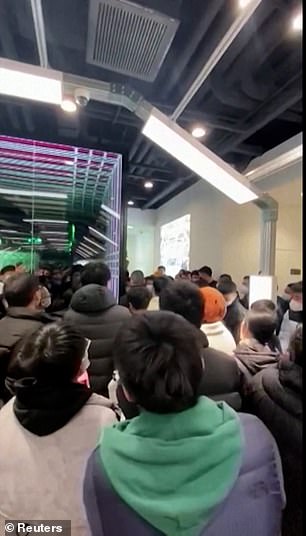 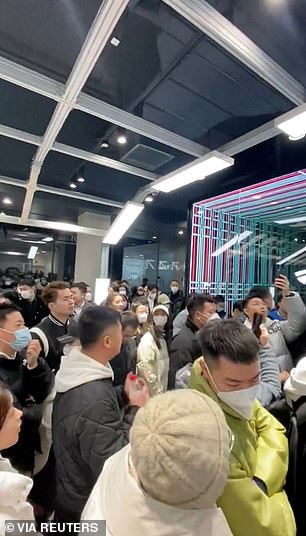 A video from Changsha in Hunan province shows people chanting: ‘Give us back our money!’

On Saturday, around 200 recent buyers of the Tesla Model Y and Model 3 gathered at a Tesla delivery centre in Shanghai to protest against the US carmaker’s decision to slash prices for the second time in three months on Friday.

Many said they had believed that prices Tesla charged for its cars late last year would not be cut as abruptly or as deeply as the automaker just announced, in a move that also aimed to support production at its Shanghai plant.

While established automakers often discount to manage inventory and keep factories running when demand weakens, Tesla operates without dealerships and transparent pricing has been part of its brand image.

About a dozen police officers could be seen at the Shanghai protest and most of the videos of the other demonstrations also showed a large police presence at the Tesla sites. 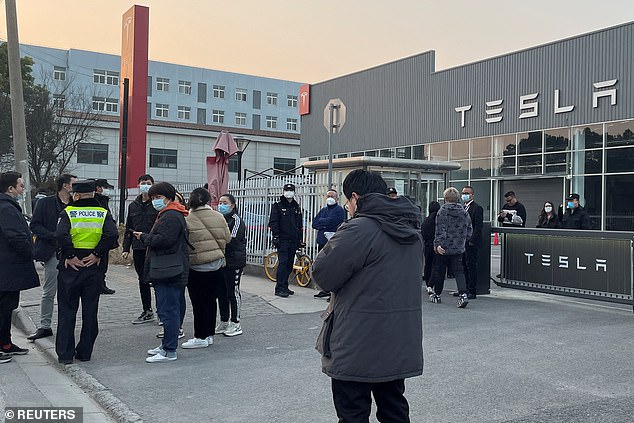 Protesters walk out from a building as police officer stands near the entrance, after demonstrating at the Tesla delivery centre in Shanghai on January 7, 2023 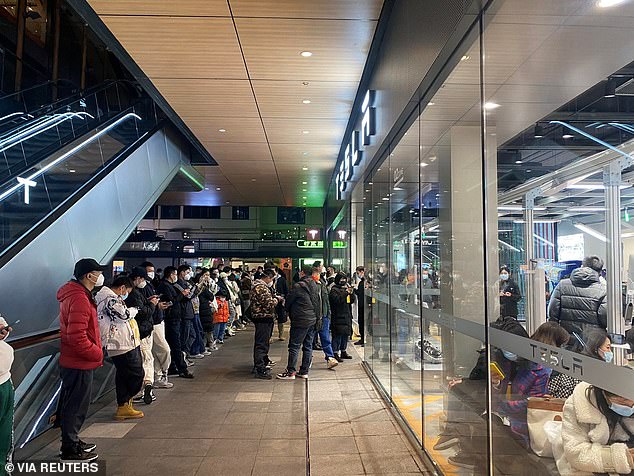 Protesters outside a Tesla showroom in Chengdu, Sichuan, China, on January 6, 2023

Prospective Tesla Inc buyers in China are waiting longer for certain versions of its Model Y car, suggesting the electric-vehicle maker’s decision to cut prices is stoking demand in its second-largest market.

The waiting time for orders of the rear-wheel-drive and long-range versions of Model Y was a week longer on Monday than it had been on Friday, Tesla’s website showed.

The wait as of Monday was two to five weeks on those models. The wait time for all versions of the Model 3 and the performance version of the Model Y remained at one to four weeks as of Monday.

Tesla cut prices by 6 per cent to 13.5 per cent on Friday in discounts that brought some of its cars to near BYD’s best-selling models in a step analysts read as a sign that a price war could be building at a time when demand in China has faltered.

As of Monday, Tesla had not made any adjustment to its January production plan for its Shanghai plant, with suspension of the assembly lines to start from January 20 through the end of the month, a person with knowledge of the matter said.

‘It (the wait time) is an early indication that the price cuts are having their intended impact, which is to boost demand,’ said CFRA Research analyst Garrett Nelson.

Nelson added that Tesla’s vehicle production has exceeded sales for three straight quarters and the company has chosen to lower prices and take some additional downtime at the Shanghai factory to bring supply and demand back in balance.

'Godzilla vs. Kong': Why King Kong Gets More Screen Time Than Godzilla