Home » World News » The Rise of #Gentleminions: Why Gen-Z Is Wearing Suits to See ‘Minions: The Rise of Gru’ 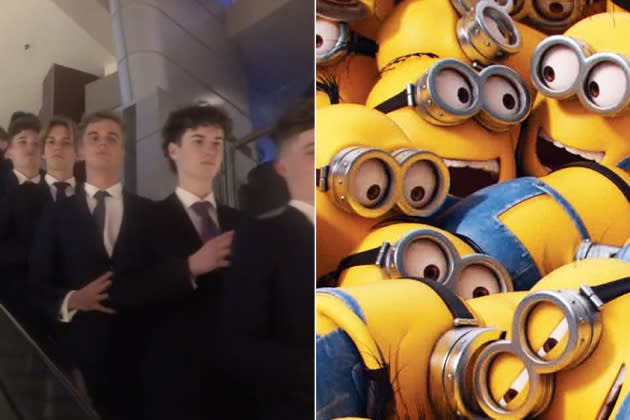 Imagine a family outing to the movie theater like any other. A parent drives their kids to the air-conditioned multiplex, shells out some cash for a large popcorn and corrals their family into the theater. Then an orderly line of twenty or so young men, all uniformed in suit jackets and collared shirts, march into the auditorium and take their seats as the trailers conclude. Then “Minions: The Rise of Gru” starts.

That’s the largely innocuous albeit startling experience that many moviegoers found themselves having over the past week. After a two-year delay due to the COVID-19 pandemic, “Minions: The Rise of Gru” finally hit the big screen and was met with resounding enthusiasm. The Illumination production shattered the domestic box office record for the biggest opening ever over an Independence Day weekend. Audiences turned out in force for the film, but some individuals decided to take their excitement a step above simply rolling out for a screening.

A new trend on TikTok and Twitter took shape over the past week, with groups of young moviegoers dressing in formal attire to attend “Minions: The Rise of Gru” in style. Dubbed with the title #Gentleminions, the hashtag has accrued 5 million views on TikTok, gaining such a level of prominence that Universal Pictures, the distributor behind the “Despicable Me” spinoff, issued a formal acknowledgement of the trend.

“To everyone showing up to ‘Minions’ in suits: we see you and we love you,” Universal wrote.

to everyone showing up to @Minions in suits: we see you and we love you. 🫶

Bill Hirst, a teenager in Sydney, Australia, created one of the first posts on TikTok to take part in the trend. Hirst’s video, which features a swath of young people in suit jackets moving up an escalator, has accrued more than 8.5 million views over the past week. “The Rise of Gru” released in theaters in Australia on June 23, giving Hirst and company a head start on the trend before the film became available in other territories.

“My mate saw one of the first videos that was quite small at the time. We wanted to do it just for fun,” Hirst told Variety. “We just chucked on our suits and went straight to the cinemas…It was very spontaneous. We had our formal literally a couple days before that. We had all had our suits ready.”

However, Hirst realized that his friends’ unassuming act of dress-up was part of a much larger movement upon visiting the theater, where the group ran into another sizable band of young people dressed in formal attire.

“There were 15 of us, but, when we got there, there was another group of about eight. This was before it actually became a trend, so we were so surprised when we saw all these other guys there as well,” Hirst said. “All the people who were just there to watch it were freaking out… You’re not used to seeing people in suits at the cinemas.”

Obie, a teenager from Maryland, had a similar run-in when he joined his friends for a “Rise of Gru” screening.

“I saw a couple of videos of people [who] had gone to do the same thing. So me and my friends we just went to the theater,” said Obie, who goes by the username @nigeriannightmare0 on TikTok. “Everyone was really civil, we just kept mannered and watched the movie. It wasn’t until we exited the theater that we saw this other group… It kind of reminded me of the Peter Parker memes, with the different Spider-Men pointing at each other.”

The two parties of strangers decided to document the moment, filming a TikTok together and taking a group photo, which has since accrued more than 185,000 likes on Twitter.

Streets turned us despicable but our money still gru pic.twitter.com/YekGa9PV7x

As COVID-19 restrictions have eased over the past year, the film exhibition industry has been in the midst of a regrowth period primarily fueled by the attendance of young men — other demographics have proven slower to return to theaters. Moviegoers like Obie, who has bought tickets for recent films like “The Batman,” “Spider-Man: No Way Home” and “Dune,” have been at the center of this.

Eyeballing the videos participating in “Gentleminions,” the trend seems to have primarily attracted that same demographic of young men. And, as with most trends involving young men, some particularly rowdy incidents have ensued, leading some theaters to bar individuals wearing suits from buying tickets for “The Rise of Gru.”

“I’ve heard from a couple employees just on TikTok that it’s been absolutely hectic the past couple of days,” Hirst said. “They see one session with like six different groups showing up in suits and it’s just packed.”

Odie shared the sentiment, saying “I really do feel bad for the theaters that have the people who are causing a commotion and disturbing everyone else’s viewing experience.”

But while the premise of the meme (wearing prom-ready attire) is entirely disconnected from the content of the film (Minions wear blue overalls and goggles, not suits and ties), this act of performative moviegoing shouldn’t be dismissed as irony or an international excuse to misbehave. Many of these Gentleminions are genuinely excited to see “The Rise of Gru.”

Consider that a person who was seven years old when the first “Despicable Me” hit theaters in 2010 is now around the age of 19. After 2017’s “Despicable Me 3,” the series has been on ice, taking a hiatus from theaters. With an extensive five-year wait between entries, some moviegoers who grew up on the series are eager to return to it.

“That’s what adds to the meme,” Obie explains. “I feel like some people genuinely think that teenage boys are going out of their way to see the movie just to wear suits. Maybe some people are doing that. But I’m sure a majority of people in my generation — because we grew up with the ‘Despicable Me’ movies — now have nostalgia and enough money to see it on our own. We’ll be inclined to do so in our own way. It’s funny to see how that turns into such a big trend.”

“Obviously, I’ve watched all the films from my childhood. We wouldn’t go if we didn’t think the movie would be good,” Hirst said. “I don’t usually go to see a kids’ movie… But you get out of it what you put into it, eh?”