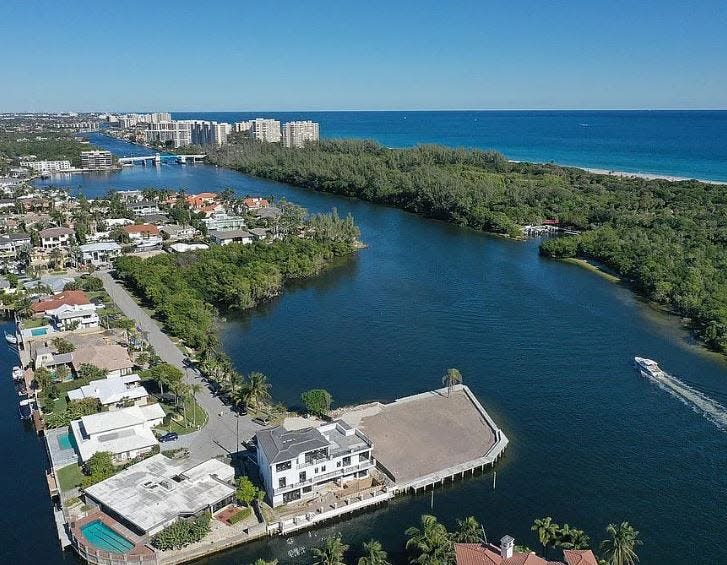 A Delray Beach developer is hawking a pristine waterfront property in Florida for a whopping $43 million, but it’s not a mega mansion, it’s under the brackish patina of the Intracoastal Waterway in Boca Raton with a base of muck and sand and threadbare seagrass.

After six years of wrangling to clear the title and other legal baggage from the 4 acres of submerged land, owner William Swaim said it’s ready for the market, which is hot for waterfront parcels.

Swaim, who specializes in flooded lands “that other people overlook,” said the plot can be filled in with buildable dirt, have a seawall constructed, and is zoned for single-family homes. He’ll do the dirt and seawall, but it will cost an extra $3.5 million.

The economy: Could a looming recession be more severe than forecast? Some economists say ‘yes’ and here’s why.

True enough, submerged lands have sparked costly legal fights. But they have also been developed into sites for homes, and even one of the area’s most high-end condominium complexes. .

I think we are getting to the point where we can’t afford to lose any more seagrass in our waterways.Everglades Law Center Executive Director Lisa Interlandi

With a pandemic-boosted housing market still flush with wealthy buyers looking for somewhere to park a yacht, at least one environmental group is concerned privately owned submerged lands will become more attractive with buyers willing to do the legwork to develop them.

“I think we are getting to the point where we can’t afford to lose any more seagrass in our waterways,” said Everglades Law Center Executive Director Lisa Interlandi. “Manatees are dying at record rates because of impacts to their habitat and increasing development on submerged lands is only going to compound that problem.”

Swaim said his property was dry ground until 1957 when the dirt was stolen by an adjacent property owner who was issued a permit to use the soil to build a nearby subdivision. Also, a 2018 Army Corps review of the parcel notes that development of the site would not adversely affect endangered and threatened sea turtles, smalltooth sawfish or manatees.

Still, Interlandi said the Corps’ review was issued before a record number of manatees began starving to death for lack of seagrass in the Indian River Lagoon. Last year, the Florida Fish and Wildlife Conservation Commission made the unconventional move to feed manatees lettuce in the winter to mitigate starvation. 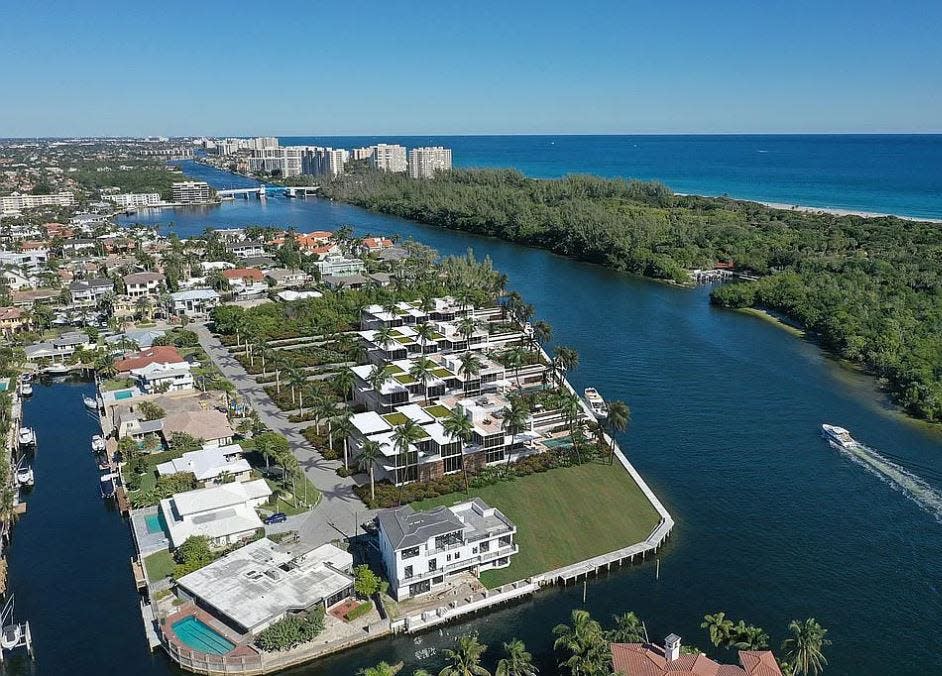 It’s unclear how much privately owned submerged land there is in Palm Beach County’s Intracoastal waterway, a 43-mile ribbon of briny water that links 23 municipalities.

The Palm Beach County Property Appraiser’s office said it has no easy way to determine the extent of private ownership. The Florida Department of Environmental Protection said it can research specific properties but doesn’t know in total how much submerged property is already in the hands of private landowners.

While Swaim said his property is in what’s considered an artificial waterway, meaning there are fewer restrictions, there have been at least two controversial cases in Palm Beach County where privately owned submerged lands in the environmentally sensitive Lake Worth Lagoon took center stage.

After The Palm Beach Post reported on the effort to develop the environmentally sensitive land vital for sea turtles and seagrasses, public outcry pressured Barreto to announce he would sell the property to the state instead.

As of Tuesday, the property was still owned by Barreto’s company. Barreto did not return phone or email messages for this story.

“With Barreto, there were a lot of politics that came into play and it wasn’t a true test of his rights,” said James Ryan, a North Palm Beach lawyer who represented Barreto in the effort to develop the land. “Under state law, you have a right to bulkhead and fill the properties, but the state tries to minimize the amount that people can use their contractual rights by saying they have to protect the environment.”

Submerged lands long the focus of litigation and court battles

The yearslong battle now has Lozman claiming city officials have taken away his right to use roughly 51 acres of mostly submerged land he owns on Singer Island. He has asked a federal judge to force Riviera Beach to buy it for a hefty price of more than $500 million.

The ultra-luxury Bristol condominium, which sold out its units for $600 million, and the swanky One Watermark Place condominium, both in West Palm Beach, are built on formerly submerged land. 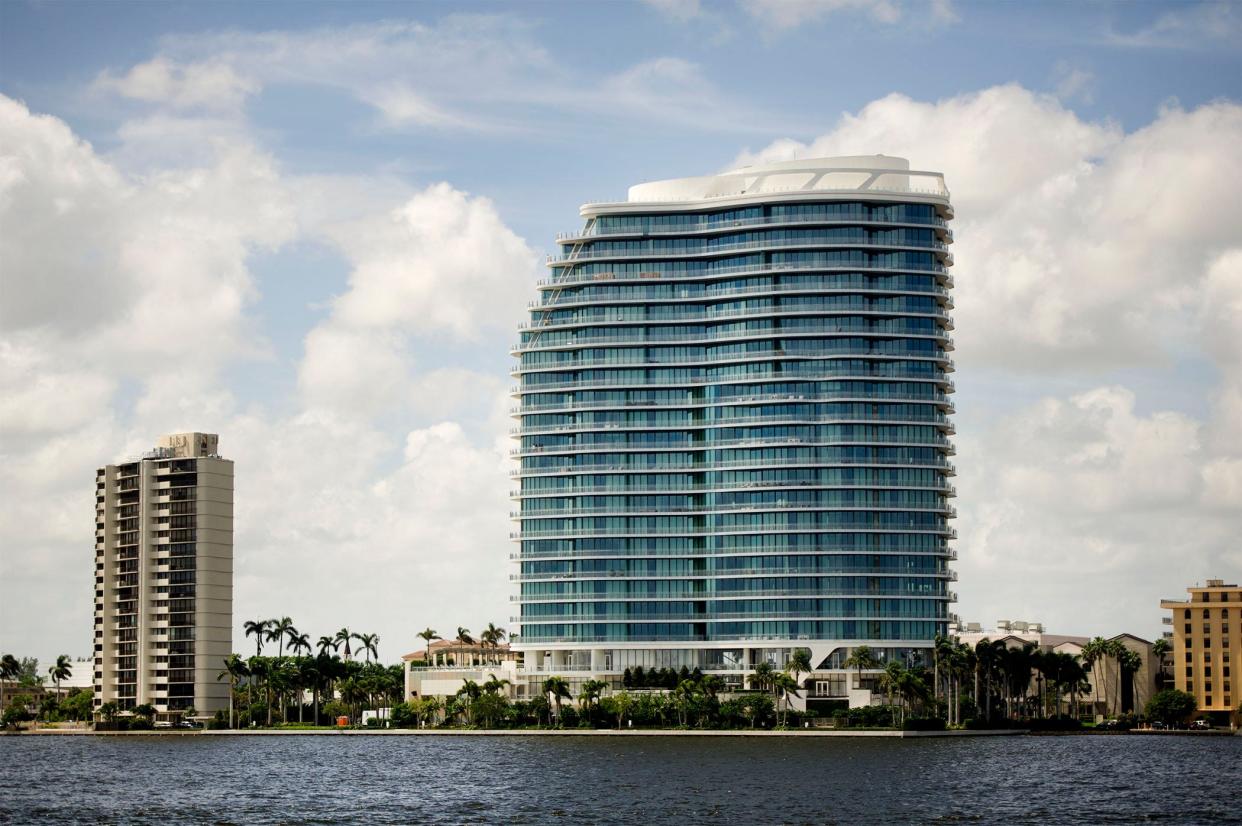 “I stay away from the Lake Worth Lagoon because there are a bunch of different rules because it’s not man-made,” Swaim said. “It’s some of the most productive environmental habitat in Palm Beach County.”

But Swaim does own 3.3 acres of submerged land in the town of Ocean Ridge through his company Waterfront ICW Properties that he wanted to develop. The town wants to rezone parcels surrounding Swaim’s land for conservation purposes.

After years of litigation, Swaim said he offered to sell or transfer the property to the town.

Town attorney Christy Goddeau said there are several contingencies attached to the offer and that the town commission has given her no direction on what to do with it.

Palm Beach County property records show Swaim bought the Ocean Ridge land in 2015 for $25,000. A June letter from his attorney to Ocean Ridge says the value of the land is $4.8 million. He bought the Boca Raton land through his company NE 32nd Street LLC in 2019 for $1.6 million, although he had it under contract before that.

Swaim said submerged lands are often owned by heirs of people who originally bought the land decades ago from the state’s Trustees of the Internal Improvement Trust Fund (TIITF). Sometimes the heirs are out of state, barely aware they own the land, or the inheritance has been divided among several people.

“I seek them out to buy it from them,” Swaim said.

Interlandi said just because land is privately owned doesn’t mean it is entitled to be developed.

“I think we need to do better in terms of protecting our submerged lands,” she said. “There is still land to build houses on. We don’t need to rely on our waterways to build homes.” 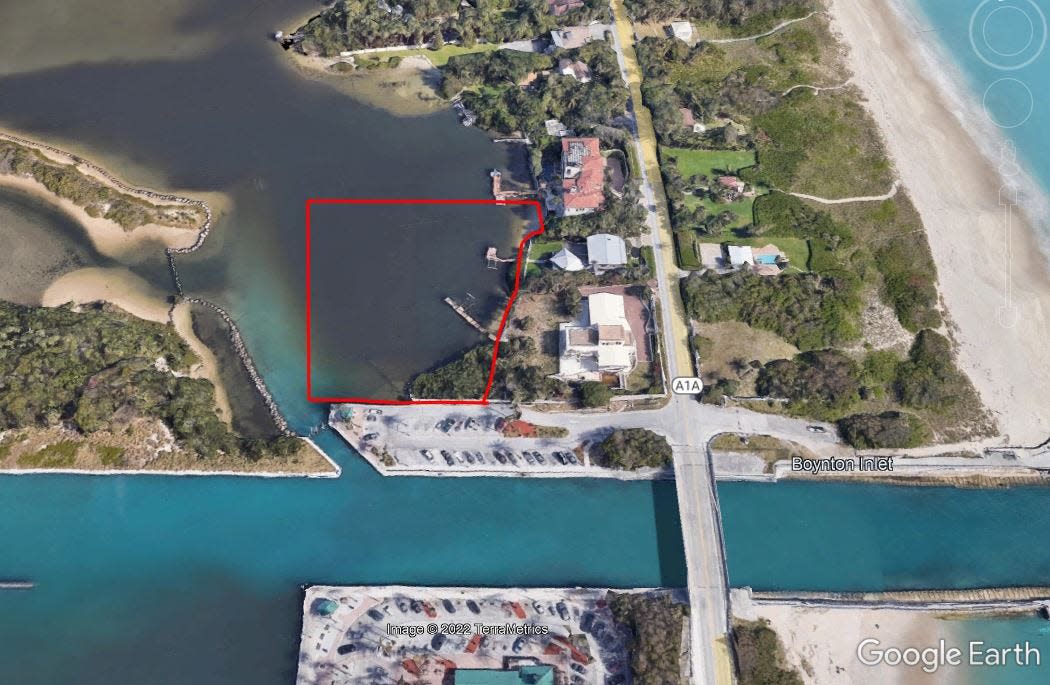 The acquisition led to a court battle with another developer whose portfolio includes a home with a dock on Berman’s submerged land. Courts ultimately ruled in the developer’s favor.

Berman said he has no desire to fill in the land, instead,

he hopes that the upland properties adjacent to his submerged parcels will change hands and the new owners will want to buy his land. He is pitching in his Zillow listing the possibility of putting “solar-powered floating mansions” by Miami-based House Yacht Living, on the properties.

Swaim said he’s received “quite a few calls” about his Boca Raton property and has scheduled meetings with brokers. The property has 600 feet of Intracoastal frontage and its view to the ocean is protected by Spanish River Park. Swaim is marketing it as the “last and largest undeveloped Boca Raton Intracoastal property for sale in 30 years.”

“Most people don’t even know that private people own parts of the Intracoastal,” Swaim said.

The Leggings Taylor Swift, Gigi Hadid, and Practically Every Celeb Owns Are on Sale Today