Brasilia: Brazilian President Luiz Inacio Lula da Silva has removed 40 troops guarding the presidential residence after expressing distrust in the military for failing to act against demonstrators that ransacked government buildings on January 8.

His decision was published in the government’s official gazette and came as Brazil’s prosecutor general charged 39 people who were among the thousands who stormed government buildings in an effort to overturn former president Jair Bolsonaro’s loss in the October election. 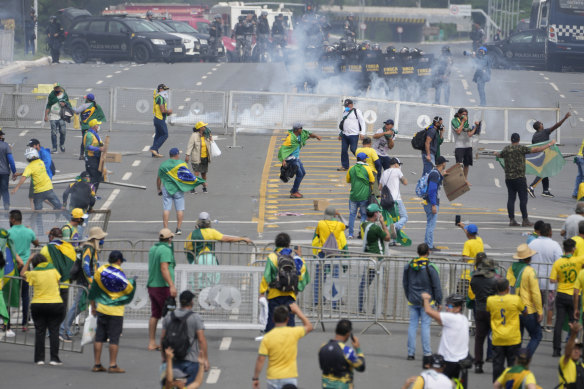 Protesters, supporters of Brazil’s former President Jair Bolsonaro, clash with police as they storm the Planalto Palace in Brasilia.Credit:AP

Prosecutors have also requested that the defendants who ransacked Congress be imprisoned as a preventive measure, and that 40 million reais ($11.2 million) of their assets be frozen to help cover damages.

Most of the troops guarding the Alvorada palace, as the presidential residence is called, are from the army, but some are also members of the Navy, Air Force and a militarised police force.

Last week, Lula told reporters that security force members were complicit in letting a mob of supporters of far-right former leader Bolsonaro storm the main buildings that form the seat of power in Brasilia.

The president’s office did not immediately respond to a request for comment on who would replace the troops guarding the residence. 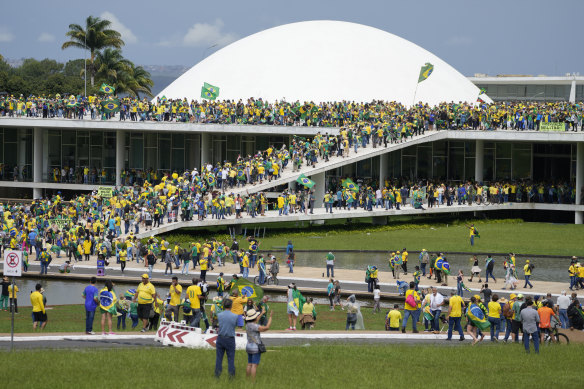 Investigations into the rampage have begun to show apparently intentional lapses in security that allowed it to occur.

Several thousand Bolsonaro supporters stormed the Congress, the Planalto presidential palace and the Supreme Court seeking to overturn the result of the October election narrowly won by Lula.

Lula has also stepped up criticism of the army for not doing anything to discourage a two-month-old encampment of Bolsonaro supporters outside its headquarters, where they clamored for the military to overturn the presidential election result. 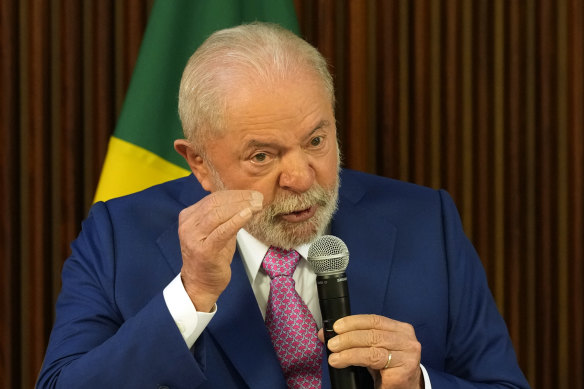 Brazil’s President Luiz Inacio Lula da Silva has expressed distrust in the military in the wake of the protests. Credit:AP

More than a thousand people were arrested on the day of the January 8 riot, which bore strong similarities to the January 6, 2021, riots at the US Congress by mobs who wanted to overturn former President Donald Trump’s loss in November’s election.

Those now charged are facing offences of armed criminal association, violent attempt to subvert the democratic state of law, staging a coup and damage to public property, the prosecutor’general’s office said in a written statement Monday night. Their identities have not yet been released.

The attackers were not charged with terrorism because under Brazilian law such a charge must involve xenophobia or prejudice based on race, ethnicity or religion.

The prosecutor-general’s office sent its charges to the Supreme Court after the Senate’s president, Rodrigo Pacheco, last week provided a list of people accused of rampaging through Congress. Additional rioters are expected to be charged.

When is Riverdale ending?