I had the good fortune, as one might put it, to be in hospital last Saturday and therefore unable to vote. Like a vast number of Victorians, I have never been so dissatisfied with the choice between the three main parties, so I was spared voting for someone I couldn’t normally endorse.

I have always been something of a politics junkie, even if only from afar. But one of the important lessons the Bible teaches is not to expect too much from governments, or any human rulers. The United States Constitution’s division of powers flows from this recognition, influenced by Calvin’s Geneva. 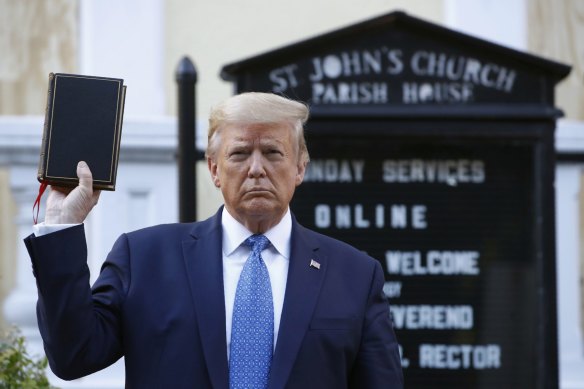 Australians are mercifully spared claims by political aspirants that they have God’s endorsement. It is powerfully present in the US.Credit:AP

Psalm 146 tells us: “Do not put your trust in princes, in human beings, who cannot save. When their spirit departs, they return to the ground; on that very day their plans come to nothing. Blessed are those whose help is the God of Jacob, whose hope is in the Lord their God.”

An interesting aspect of biblical descriptions of human leaders, from Abraham and Moses to Peter, is that every single one is flawed – no exceptions.

One thing that Australians are mercifully spared is claims by political aspirants that they have God’s endorsement – that would make us deeply uncomfortable. It is powerfully present in the US; for example, “God, guns and Trump”.

But the idea that Jesus would endorse a political party is ludicrous. Apparently he was an early exponent of the separation of church and state, evidenced by his statement: “Render unto Caesar the things which are Caesar’s; and unto God the things that are God’s.”

Yet although the Apostle Paul tells Christians their true citizenship is in heaven, they are not told to separate themselves from secular politics – quite the contrary. Yes, they understand that political processes and relationships are subject to all the normal human frailties – ambition, greed, special interests, incompetence and the rest – as indeed are we all. But Christians have responsibilities to the state, and the same connections as other inhabitants.

After the exile of Jews in about 586 BC at the hands of Babylonian emperor Nebuchadnezzar II, the prophet Jeremiah speaks for God: “Seek the peace and prosperity of the city to which I have carried you into exile. Pray to the Lord for it, because if it prospers, you too will prosper.”

Six centuries later, Paul exhorts Christians to make “supplications, prayers, intercessions, and thanksgivings … for all people, for kings and all who are in high positions, that we may lead a peaceful and quiet life, godly and dignified in every way”. We don’t have to like our leaders to want them to be wise, practical and generous.

Barney Zwartz is a Senior Fellow of the Centre for Public Christianity.