You have my heart… now have my kidney! A wife’s gift of life to her husband on their ruby wedding anniversary

For four decades, Tricia Heavyside has honoured her pledge to devote herself to husband Steve whether in sickness or in health.

So as his kidney disease worsened with their 40th wedding anniversary approaching, she decided there was only one gift which could do justice to their bond.

In an extraordinary act of love, the 61-year-old has donated one of her kidneys to her husband – giving him hope of a future without daily dialysis.

Before the operation, the businessman struggled even to get out of bed in the mornings. 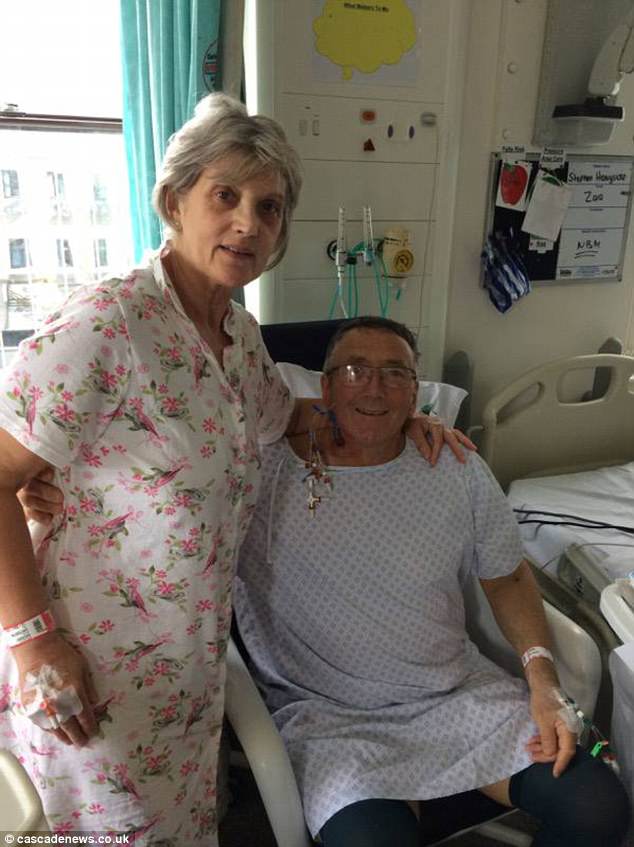 Bedside: Tricia and Steve Heavyside the day she donated her kidney

Now, following his wife’s selfless ruby anniversary gift seven weeks ago, Mr Heavyside, 60, is back at work and says his life has been turned around.

‘Tricia is my hero, I can’t thank her enough,’ he said yesterday. ‘The transplant has transformed my life. I’m a new man. It was a perfect ruby wedding anniversary gift.

‘My health had really deteriorated before my transplant, my [kidney] function had got down to 6 per cent. I was struggling to get my legs out of bed.

‘The doctors are amazed at the success of my transplant. The function is up to 50 per cent.’

Mr Heavyside, of Walney, Cumbria, was diagnosed with polycystic kidney disease and had been on daily peritoneal dialysis, receiving treatment in Preston.

After he failed to find a transplant organ or a living donor, Mrs Heavyside decided to step in ahead of August’s anniversary – even though she was not a blood match. Mr Heavyside had four days of intensive plasma treatment at Manchester Royal Infirmary to remove antibodies from his blood before the transplant so his body would have less chance of rejecting his wife’s kidney.

He was also given some of her antibodies to boost the chances of the kidney being accepted.

She was in surgery for two hours, while his operation took four. Mr Heavyside, who runs a kitchen and bathroom design firm, said: ‘All the medical teams have been wonderful at Preston and Manchester … from the dialysis nurses through to the surgeons. The care we have received from the NHS has been amazing.’ 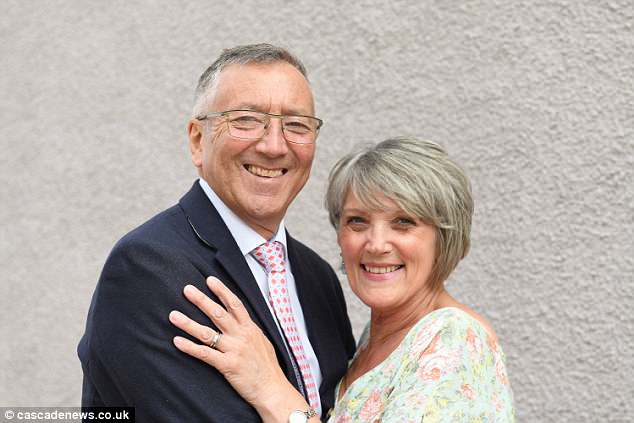 Together again: The pair now in happier times

He is now back riding his bike and going out for walks, and he aims to be playing golf again later this year. He said: ‘I now feel able to resume normal activities. We are now planning for the future. I couldn’t really do that before. When you get down to 6 per cent kidney function, you think “How long have I got?”’

His wife said: ‘We just cried when we saw each other for the first time after our operations. Steve was just beaming. It was very emotional. One of the biggest rewards is the difference I can see in Steve.’

They hope medical advances will mean no more family members need transplants. Now they are urging others to become donors.

Mrs Heavyside said: ‘I was petrified about the operation and it was nowhere near what I imagined it would be.

‘When I saw Steve deteriorating I thought, I have perfectly good kidneys, and I wanted to help him. I did my research and said I would be a donor.

‘My recovery has been excellent. I did not feel like I’ve been in hospital. I would recommend that other people consider this. It doesn’t restrict you.

‘Five weeks later I had gone back to my spinning class and I was out walking the dogs.’

Her husband said: ‘There is a shortage of donors. We are urging people to join the donor list, or if they know someone who has renal failure to consider putting themselves forward because the transformation is incredible.’

Sony Revamps Its Publishing Company as the Power of Songwriters Rises