AL-RAYYAN, Qatar — Two American journalists have been told to remove rainbow-patterned articles of clothing by authorities at World Cup venues in Qatar in recent days.

On Saturday, Los Angeles Times reporter Kevin Baxter was told by a police officer at the U.S. men’s national team’s Qatari training site that a rainbow-colored mask was not allowed.

Two days later, at the Ahmad bin Ali Stadium, where the USMNT plays Wales on Monday night, longtime soccer journalist Grant Wahl said that he was told by security to change out of a shirt with a rainbow pattern around a soccer ball. FIFA told Yahoo Sports that the incident was a "mistake," and said it has been "sorted."

Just now: Security guard refusing to let me into the stadium for USA-Wales. “You have to change your shirt. It’s not allowed.” pic.twitter.com/TvSGThMYq8

Wahl said in a follow-up tweet that he was detained for “nearly half an hour.” He wrote on his website that, after tweeting about the incident, a security guard “forcibly ripped my phone from my hands.” He was eventually allowed to enter with the shirt on, but only after what he described as an “ordeal.”

LGBTQ rights have become one of several flashpoints of this World Cup in Qatar, where homosexuality is criminalized. FIFA and the Supreme Committee, the joint World Cup organizers, have promised LGBTQ fans and participants that they are welcome. FIFA president Gianni Infantino said Saturday that he’d “been speaking about this topic with the highest leadership of the country — several times, not just once. And they have confirmed that I can confirm that everybody is welcome.”

But before Monday's matches kicked off, seven European teams had scrapped plans to wear rainbow-colored anti-discrimination captains' armbands after FIFA threatened them with “sporting sanctions.” Then, ESPN reported that FIFA demanded Belgium remove the word "love" from the collar of their jerseys two days before they play Canada in Group F. 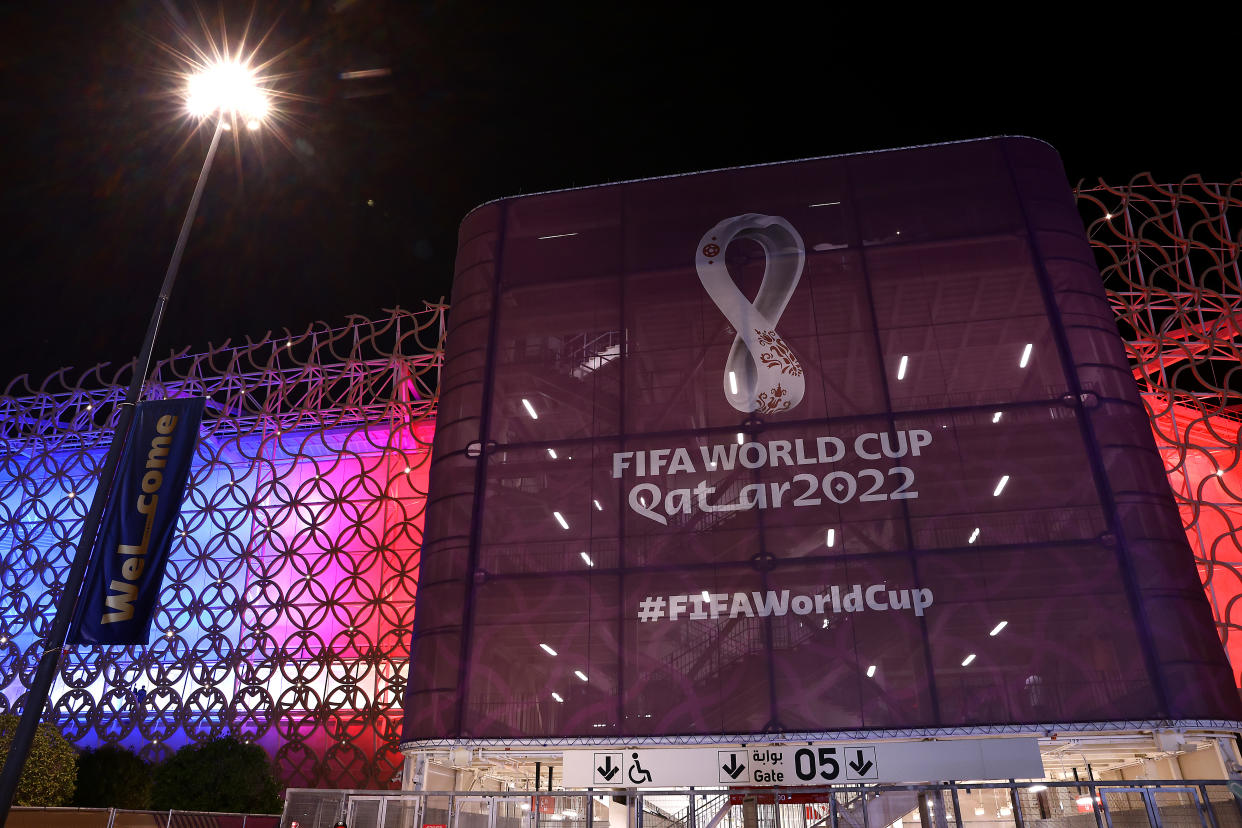 What fans and Western officials have always worried about, though, is the inability of organizers to control the actions of every single local police officer and security guard.

Baxter — who has been wearing the rainbow-colored mask, among others, for roughly two years — was told to remove it as he entered the Thani bin Jassim Stadium ahead of a U.S. training session. He was then offered a standard blue mask, at which point he realized that he’d likely been told to remove it because of the LGBTQ Pride colors. “And that's when I got upset,” he told Yahoo Sports. He refused to wear the plain mask, and went without one.

After Baxter tweeted about the incident, a U.S. Soccer official came to him “very upset with the police officer's actions,” he said. He later received a call from a Supreme Committee representative, who asked about his safety, and said they would look into the incident.

Wahl also said he received an apology from a FIFA official. Here is the rest of his description of the incident from Wahl's website:

One security guard told me that my shirt was “political” and not allowed. Another continually refused to give me back my phone. Another guard yelled at me as he stood above me — I was sitting on a chair by now — that I had to remove my shirt.

I told him no.

“You can make this easy. Take off your shirt,” one said.

I told him no, adding that my shirt wasn’t political at all.

My friend Andrew Das, a reporter for the New York Times, walked past, and I informed him what was going on. They detained him too.

Eventually, the guards made me stand up, turn around and face the CCTV camera above us.

“Are you from the UK?” one guard asked.

“New York,” I said. This was getting annoying. I arrived when I did so I’d have enough time to watch the Netherlands-Senegal game, and now I was missing it.

Finally, they let Andy go. And then a security commander approached me. He said they were letting me through and apologized. We shook hands.

One of the security guards told me they were just trying to protect me from fans inside who could harm me for wearing the shirt.

(A FIFA rep later apologized to me as well.) 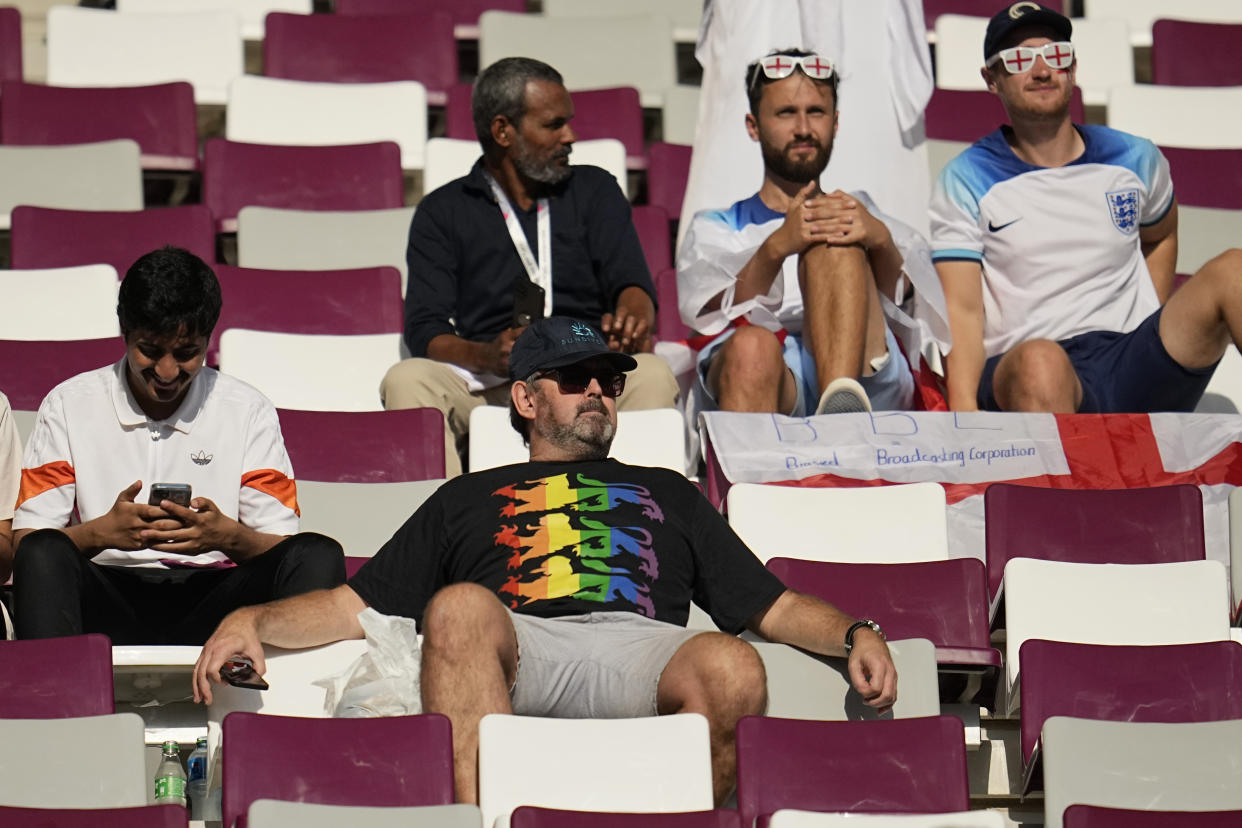 German children banned from sending their Christmas lists due to GDPR

May the Fourth Be With Reylo Stans and Palpatine Fans – 'Star Wars: The Rise of Skywalker' Joins Disney+ on May 4

Alex Jones breaks rules as she announces Strictly contestants: ‘Anyone else notice?’