Literature teachers are said to have such passion for their subject they tend to teach it until they retire.

But year 12 students don't exactly share that passion, with new figures showing literature is no longer among the top 20 most popular VCE subjects. While literature was the 15th most commonly studied subject in 2015, it tumbled to 19th last year and fell off the list this year. 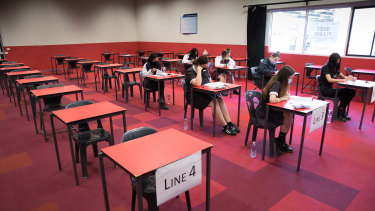 After teaching the subject for 13 years in Melbourne's western suburbs, Dr Christine Lambrianidis has a few ideas why fewer students are choosing literature in their highly competitive final year of school.
"It's a fun subject, it's very much based on the real world, and students have a sense of agency," Dr Lambrianidis said.

She said while literature scales up, most students did English and other subjects that would maximise their final score.

There's also this idea of literature being an elitist subject, Dr Lambrianidis said, that you "must come from a part of Melbourne or your parents must do a particular job".

"The federal government making degrees in humanities more expensive only feeds into this myth of elitism and, dangerously, works to further divide our society in term of class."

"I also think there’s a misconception for students in which they believe that it’s limited to those that read 24/7 and know all the great 20th century literary pieces; but it’s really not true," she said.

Dr Emily Frawley, president of the Victorian Association for the Teaching of English, said: "It seems to be that those in the inner circle [literature students] are all hard converts, but those on the outside don’t realise what they’re missing out on."

Dr Frawley, who is senior school program manager at Maribyrnong College, said she felt a different atmosphere in the literature classrooms.

''I see more engaged, creatively stimulated students and I get quality class-based conversations where the students’ thinking is rewarded,'' she said.

"In the English classroom I have all the answers. In the literature classroom, students constantly surprise me with ideas and interpretations I’d never thought of."

The Victorian Curriculum and Assessment Authority figures show the top 10 year 12 subjects are largely unchanged from 2015 to 2020.

English is by far the most commonly studied subject, followed by further mathematics, psychology, mathematics, and health and human development.

Biology, business management, chemistry, physical education and legal studies round out the top 10.

But there have been changes in the next tier of subjects. History: Revolutions has lost popularity, dropping three places to 15th over the five-year period.

English language joined the top 20 in recent years and climbed to 18th this year, the figures show.

Dua Lipa ditches knickers in daring split-to-the-waist dress – but did she wear £10 'knicker sticker' to hide her modesty?