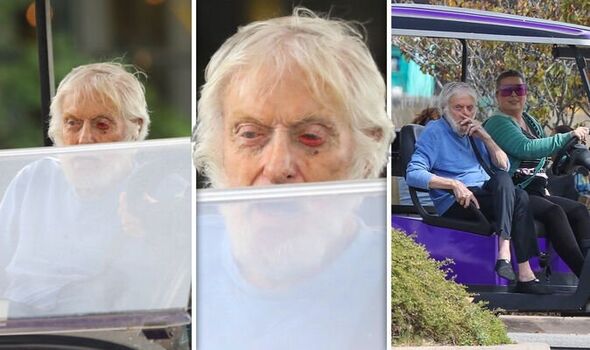 Dick Van Dyke, 96, pictured with a swollen eyelid as he enjoyed a golf buggy ride with his wife

Dick Van Dyke has been pictured running errands with his wife Arlene Silver in Malibu on a golf buggy, with the Hollywood actor’s wife taking the wheel.

The Hollywood actor appeared to have an infection in his left eye, due to his swollen red lower eyelid.

Dick wore an oversized light blue sweater, navy trousers and black slippers as his wife drove him round the shopping complex.

This comes after Dick was pictured last month giving away money to job seekers and providing red plaid winter coats to the homeless in his home of Malibu.

Dick married his former make-up artist Arlene in February 2012 when he was 86 and she was 40.

Dick Van Dyke was seemingly suffering from a health issue

On a close look, Dick Van Dyke appeared to have an infection in his left eye, due to his swollen red lower eyelid.

Dick Van Dyke went for a casual look as he ran errands with his wife Arlene in Malibu, California. Dick wore an oversized light blue sweater, navy trousers and black slippers as his wife drove him round the shopping complex.

Dick Van Dyke’s wife Arlene Silver also dressed casually for the occasion as she sported a pair of leggings, a striped top, and a green jacket, along with a matching clutch bag. For accessories, she wore a large pair of dark pink shaded sunglasses.

Dick Van Dyke and Arlene Silver married in February 2012 when he was 86 and she was 40 years old.

Dick Van Dyke has received multiple awards including a Grammy Award, four Primetime Emmy Awards and a Tony Award. He won a Tony Award for Best Actor in a Musical for his portrayal of Albert Peterson in the Broadway musical Bye Bye Birdie that opened in April 1960.

Dick Van Dyke was honoured in 2013 with a SAG Life Achievement Award, and in 2021 was a recipient of the Kennedy Center Honors for his lifetime contribution to American culture.

How old is Bear Grylls, who is his wife Shara, how many kids do they have and when did he become Chief Scout?

Who is Chuckle Brother Paul Elliott, what's his net worth and who are his other siblings The Patton Brothers?