Unfazed by the reactions to their on-stage addressing of Roe v. Wade reversal, the ‘Without Me’ hitmaker calls the ‘people pay to see you sing not hear your views’ argument ‘dumb.’

AceShowbiz –Halsey is not one to stay quiet over important matters. Taking offense at how some of their fans reacted to their shared opinion on the Roe v. Wade reversal, the “Without Me” hitmaker sent a clapback at those walking out of their Sunday, June 26 concert in Arizona.

Days after fans ditched their gig due to their abortion rights speech, the 27-year-old singer made use of their Twitter account to hit back at the offending fans. “The ‘people pay to see you sing not hear your views’ argument is so dumb,” they angrily tweeted on Wednesday, June 29. 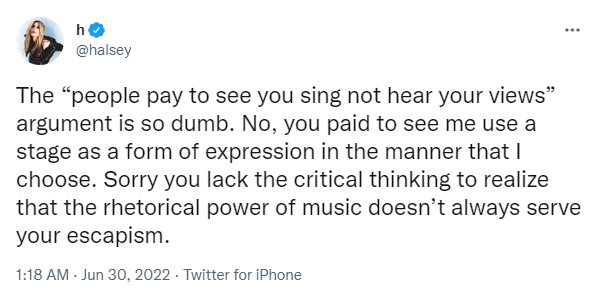 Halsey angrily sent a clapback tweet at the offending fans.

“You paid to see me use a stage as a form of expression in the manner that I choose. Sorry you lack the critical thinking to realize that the rhetorical power of music doesn’t always serve your escapism,” the “Bad at Love” singer continued scolding those criticizing them.

Halsey’s sharp message came after one particular fan gave confirmation that many concertgoers ditched their gig in response to their on-stage addressing of the Roe v. Wade overturning. In response to the fan’s tweet, they also replied by tweeting back, “downside of doing outdoor venues: no door to hit them on the way out.” 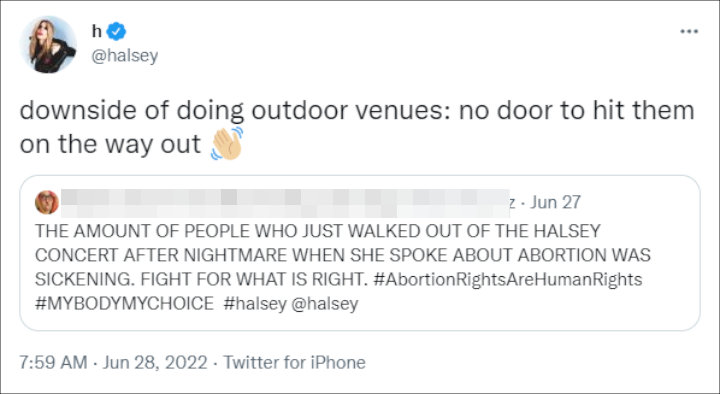 Halsey replied to a fan who confirmed that many concertgoers have ditched their gig.

During their Sunday gig at the Ak-Chin Pavilion in Phoenix, Halsey was caught on camera addressing the abortion ruling on-stage. In the video shared online by a fan account, they could be heard saying, “Some of the people I’m looking at right now are going to need an abortion one day, and you deserve that.”

Halsey went on saying, “If you’re mad in this audience right now, and you’re sharing statistics on Instagram and infographics and saying … ‘That’s really f**ked up,’ what you should do instead is you should be sharing stories about how you’ve benefited from abortion somehow.”

At the end, Halsey stressed, “Whether it’s a life-threatening situation or it’s not, you deserve it. And here in Arizona, you guys gotta promise me that you’re gonna do that work so that the person to the left of you and to the right of you has that right for the rest of their lives.”

Ellie Goldstein Continues to Break Boundaries for Models with Down Syndrome: See Her New Allure Cover