Richard Wilkins has played the heartbreaking message Olivia Newton-John’s daughter Chloe Lattanzi left the him following the death of her mother at age 73.

The actress and singer died peacefully at her home in Southern California on Monday morning, surrounded by family and friends. Her husband John Easterling announced her death on her Facebook page.

‘Chloe Lattanzi, Olivia’s daughter, sent me a beautiful message earlier today, which I played and cried again,’ Richard revealed on Wednesday’s episode of the Today show, as he held back tears. 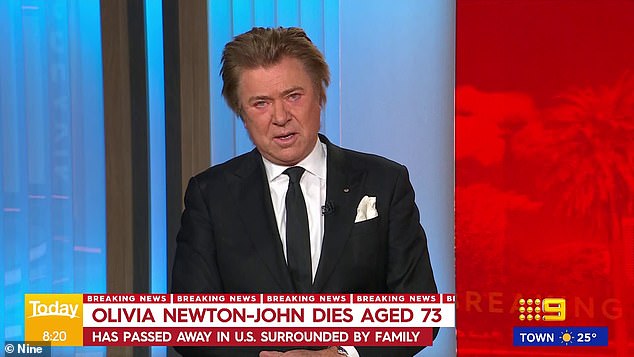 ‘And I said to her, “I would never do it without your permission. Would you like me to share your beautiful message with her many friends and fans on-air?”

‘And she said, “Yes, please. Tell them how much their love is helping me cope. I want to be a link for them. Give light, give thanks, gratitude. I’m holding you in my heart.”‘

‘Hi Richard, this is Chloe, I just saw your beautiful tribute to my mummy,’ the message read.

‘I just wanted to hold you. I saw how much you loved her and I just want you to know she’s free now and out of pain and all the family is here together. 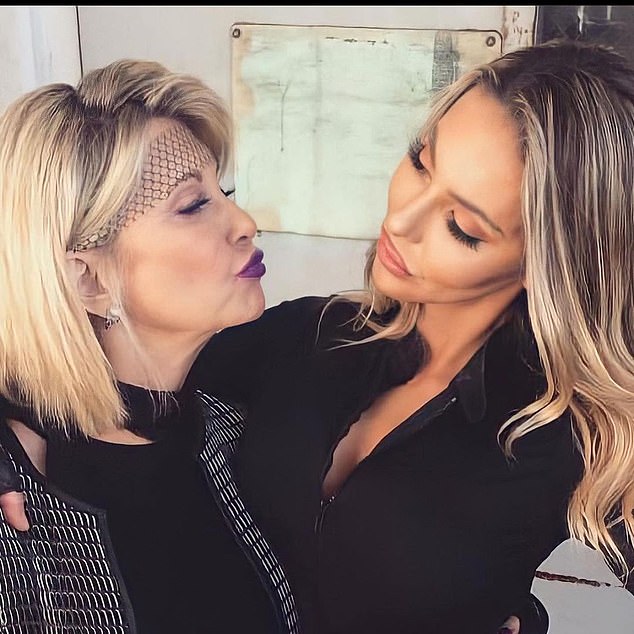 The actress and singer died peacefully at her home in Southern California on Monday morning, surrounded by family and friends. Her husband John Easterling announced her death on her Facebook page. Pictured with his daughter Chloe

Chloe ended the message with: ‘I love you my friend, thank you for doing that.’ 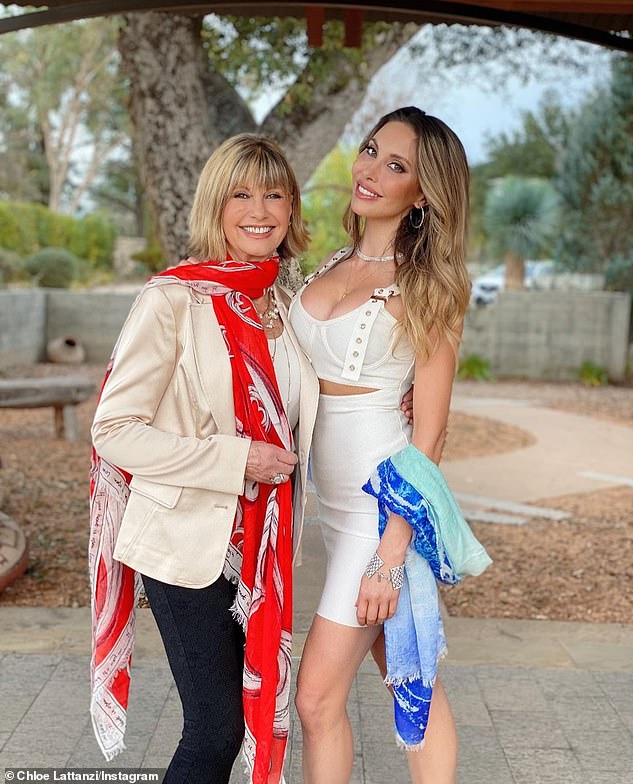 Just months before Olivia’s death, Chloe, 36, vowed to stand by her mother ‘always and forever’ while sharing a gallery of pictures of the pair together on Facebook

It comes just days after Wilkins, 68, burst into tears as his last interview with Olivia was aired.

Today host Karl Stefanovic left his seat on the panel to comfort his colleague as he wiped away tears.

‘I didn’t want to do this,’ Wilkins wept. 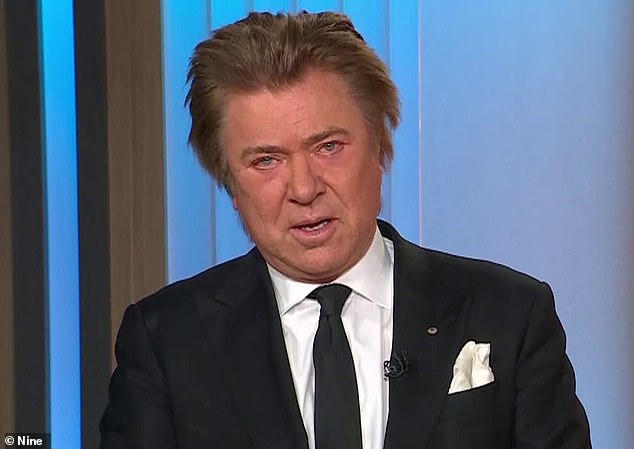 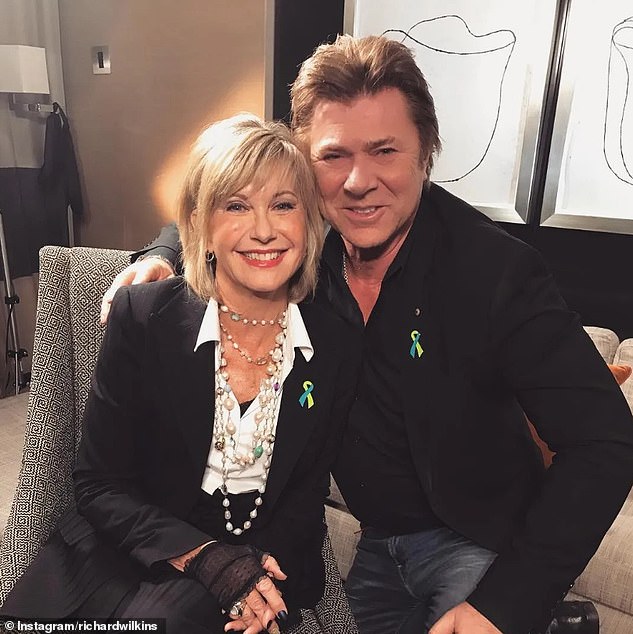 ‘It’s alright,’ Stefanovic said while hugging the presenter. ‘This woman was extraordinary.’

Wilkins was close to tears earlier in the show when he first delivered the heartbreaking news about Olivia’s death.

‘Dickie, I’m so sorry for your loss,’ Stefanovic said. 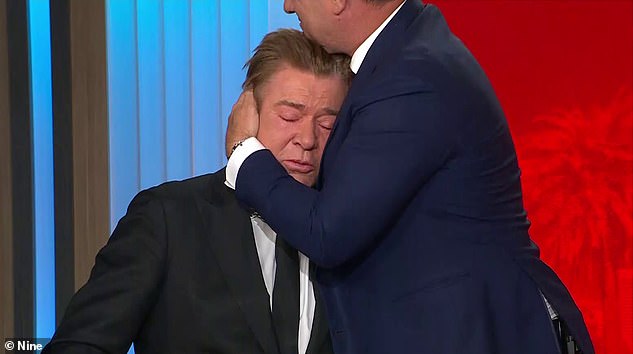 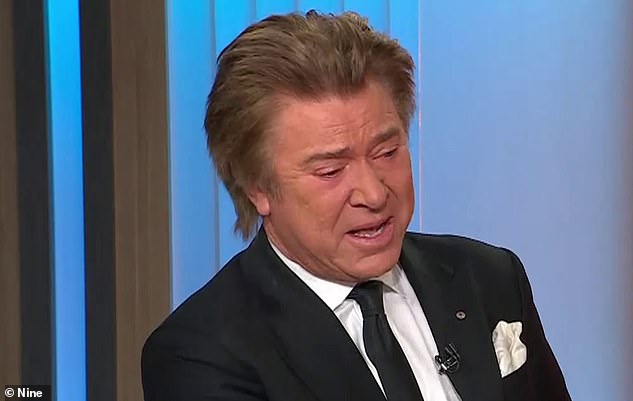 ‘I was just sort of numb,’ Wilkins said to Karl and Ally. ‘I didn’t really know what to think’

‘It’s our loss,’ Wilkins replied. ‘The world has lost a beautiful human being today.’

He then went on to reveal the devastating early morning phone call he received of the news.

‘I was just sort of numb,’ he told to Stefanovic and co-host Allison Langdon.

‘You know, all the dates and facts and figures and things just disappear and I just felt completely, just completely numb. I didn’t really know what to think.’ 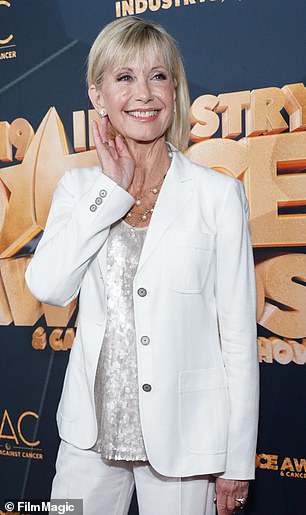 Olivia Newton-John, left, in one of her last public appearances in 2019. The actress died on Monday aged 73. She is shown, right, in her most iconic role in Grease in 1978

Speaking on Nova’s Fitzy and Wippa on Tuesday morning, Wilkins discussed his first ever encounter with the Grease star.

‘I think I was hosting a sort of a meet and greet thing she must have been promoting a record or something,’ he recalled.

‘And that was I think the first time I met her and we just got on like a house on fire at this thing.’

Wilkins said he’d been a fan of Olivia for his whole life and that he ‘never heard a bad word about her’.

‘She was never flashy. She was never a show off. You never see her on the social pages. She would just she just was so dignified,’ he added.

‘And such a classy, beautiful, gorgeous, wonderful lady and a great mum to (daughter) Chloe (Lattanzi).’

Olivia’s husband broke the news of the star’s death in a heartbreak Facebook post on Monday morning, following her brave and extraordinarily public decades-long battle with cancer.

Olivia Newton-John and John Travolta in the iconic 1978 movie Grease that catapulted her career. He was among the first to pay tribute to her on Monday

‘Dame Olivia Newton-John (73) passed away peacefully at her Ranch in Southern California this morning, surrounded by family and friends,’ Mr Easterling wrote.

‘We ask that everyone please respect the family’s privacy during this very difficult time.

‘Olivia has been a symbol of triumphs and hope for over 30 years sharing her journey with breast cancer.

‘Her healing inspiration and pioneering experience with plant medicine continues with the Olivia Newton-John Foundation Fund, dedicated to researching plant medicine and cancer.’ 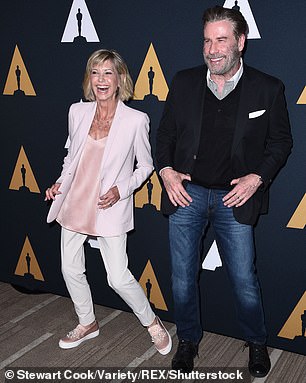 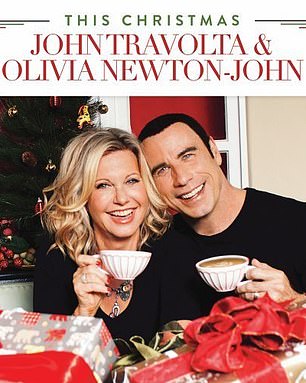 The actress famously beat breast cancer twice but was diagnosed again in 2017.

She spent the last few years at home, campaigning for animal rights and raising money for her charity.

In a haunting interview with The Guardian in 2020, she said of the disease: ‘It’s been a part of my life for so long.

‘I felt something was wrong. It’s concerning when it comes back, but I thought ‘I’ll get through it again’. 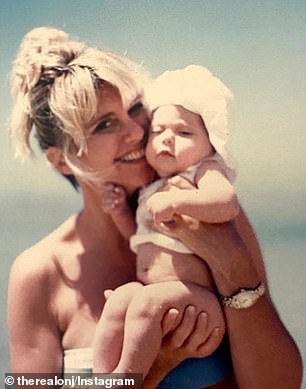 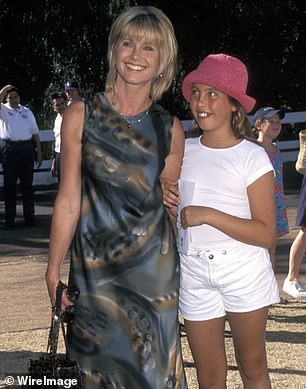 Olivia Newton-John with her daughter Chloe Lattanzi, left, and right, when Chloe was a child. She suffered several miscarriages before giving birth to Chloe in 1986

Instagram: how to customise your app icon on iPhone and Android