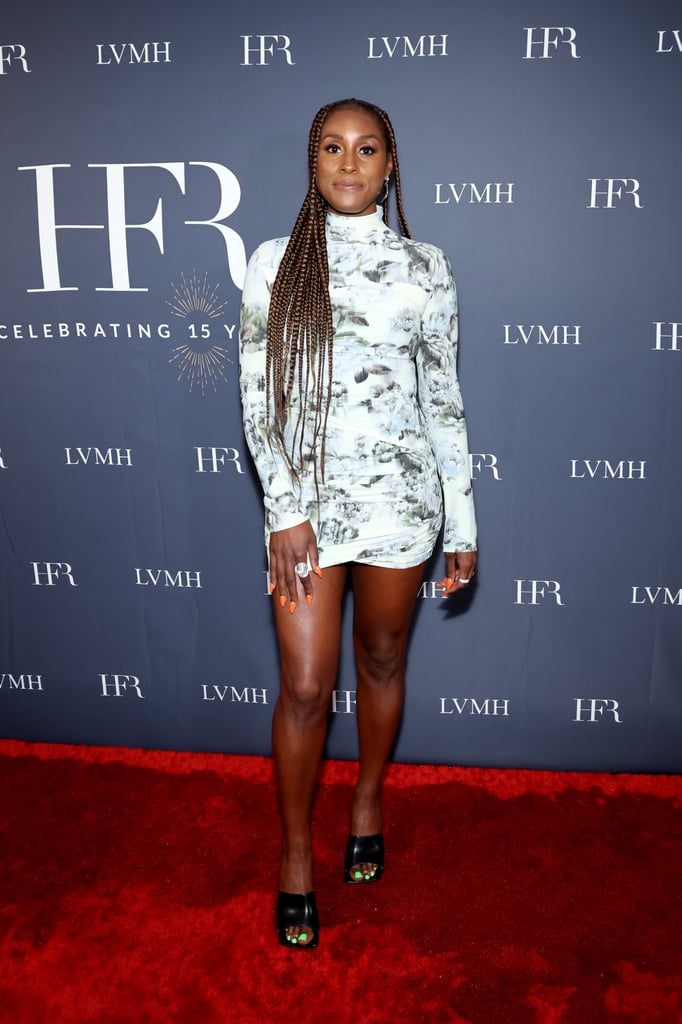 Janet Jackson and Issa Rae were two notable attendees of Harlem’s Fashion Row 15th Anniversary Fashion Show And Style Awards in New York on Tuesday night. The glamorous event welcomed a star-studded crowd at the General Grant National Memorial in Harlem, in celebration of the myriad of contributions made by Black visionaries in the fashion industry.

Janet Jackson was honored with the Icon of the Year Award at the after-party, and she certainly dressed like the lady of the hour. The singer looked whimsical in a tan tiered tulle skirt, paired with a cropped open-front jacket and a graphic t-shirt in a color-block red and navy pattern. She accessorized with several jewelry pieces, including stacks of small and large bracelets (a few of them designed in a standout marble print), and silver hoop earrings. Her black tresses were styled into a halfway updo, framing her soft-glam makeup.

Meanwhile, Issa Rae also had a big night as the first recipient of the Virgil Abloh Award — a distinction given to those that embody the late multi-hyphenate designer’s brilliance and vision through contributions to culture and community, according to the press release. The “Insecure” star graced the red carpet in a mock-neck mini dress imprinted with leafy motifs. The light-blue design featured long sleeves and a wraparound bodice, reaching just above her thighs to put her legs on full display. She finished with tall black mules, a couple silver rings and matching statement earrings.

Other honorees included Sergio Hudson, who was named Designer of the Year; Robin Givhan who received the Editor-of-the-Year Award; and Ade Samuel who was honored as Stylist of the Year. The event included a fashion show featuring three emerging Black designers: Clarence Ruth, Johnathan Hayden, and Nicole Benefield. Ruth’s collection for Cotte D’Armes was a study in contrasts, with structured jumpsuits teamed with motorcycle helmets, and ruffled white gowns paired with casual denim jackets. Benefield presented fluid separates in neutral tones, like swinging trench coats, sheer blouses, and two-tone maxi dresses. For his Deus Ex Machina line, Hayden dressed models in intricate embellished dresses and printed gowns, each uplifted by pearls adorning their hair and eyebrows.

All three designers received Harlem’s Fashion Row ICON 360 grants to fund their businesses, awarded by Louis Vuitton Americas; and they were paired with an executive mentor from the fashion house to guide their careers in design. Harlem’s Fashion Row was founded by Brandice Daniel as a resource to uplift Black designers and help them achieve sustainable growth in the fashion industry. Daniel also wowed at the event, clad in a feather-embellished mini dress.

Ahead, appreciate the celebrity outfits and designs on display at the Harlem’s Fashion Row event.

Local elections 2018: Theresa May boasts Corbyn has failed despite 'throwing everything' at key London seats a Labour leader denies being 'past peak'

Is this the proof that Rebekah Vardy bullied Iain Lee?