Works about the devastating impact of nuclear testing, climate change and the COVID pandemic sit side-by-side with personal stories of love and homages to land in the most significant Indigenous art awards in Australia.

Margaret Rarru Garrawurra has won the main prize, worth $100,000, in the Telstra National Aboriginal and Torres Strait Islander Art Awards (NATSIAAs) for her massive woven sail, titled Dhomala (pandanus sail). The extraordinarily intricate work is a reminder of how closely the northern Australians worked with Macassans, from the region that now makes up part of Indonesia.

Garrawurra remembers watching her father making a sail like this – his grandfather had been taught by the Macassans and passed on the skill to his son – and was inspired to create one remembering him. It took about eight months to make: the process involves harvesting the pandanus, using bush dyes to colour it, and then weaving it.

While referencing the senior Yolngu artist’s cultural identity, Dhomala (pandanus sail) reflects the historical and enduring relationships between her people and the people of modern-day Indonesia. 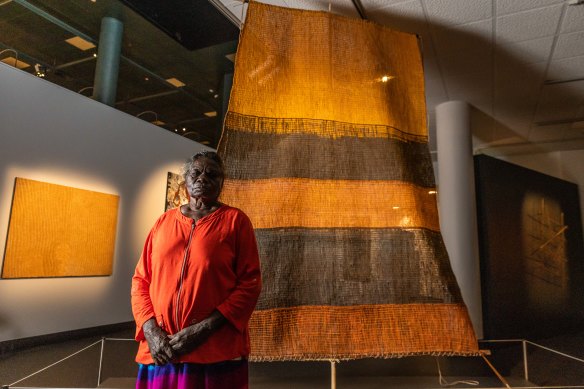 The NATSIAAs were presented on Larrakia land at the Museum and Art Gallery of the Northern Territory (MAGNT) at an open-air ceremony on Friday night. The prize pool for the awards has increased this year, with the main prize worth $100,000 and the other categories worth $15,000. Funds for acquisitions by MAGNT have increased from $10,000 to $50,000.

Photographer and fashion designer Gary Lee’s tender portrait of his grandfather, a work called Nagi, received the Works on Paper Award. His grandfather, Juan Roque Cubillo, was killed in the Darwin bombings and is depicted surrounded by gardenias, which he regularly wore on his hat. 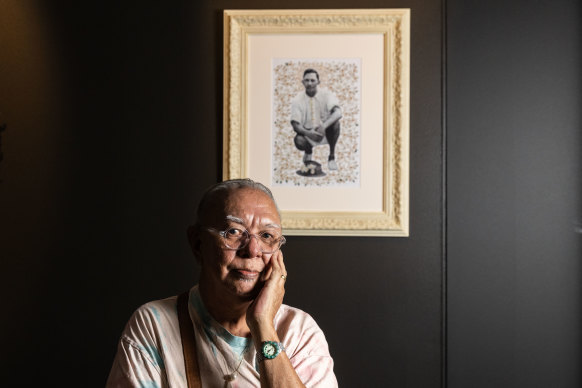 Gary Lee with his work Nagi, 2022, winner of the Works on Paper category of the 2022 NATSIAAs.Credit:Helen Orr

Louise Malarvie won the emerging artist award for her painting Pamarr Yara, which depicts her father’s Country around Paraku [Lake Gregory in WA] during the wet season. “When the rain comes, it washes the land and makes it nice and smooth and clean. When you’re driving out bush you can see how it changes, some part is pinkish, white and like ochre,” she says. “It’s like this Country is singing you back.”

Betty Muffler won the General Painting Award for Ngangkari Ngura (Healing Country). Healing is an ongoing theme in her work, inspired by growing up near where nuclear testing occurred at Maralinga and Emu Field and witnessing its devastating impact on her family and Country.

The late Ms N Yunupingu received the Telstra Bark Painting Award for Yunupingu – The Rock while Jimmy John Thaiday from Erub in the Torres Strait Islands won the multimedia award for his video Beyond the Lines, a stunning exploration of his connectedness to his Country. 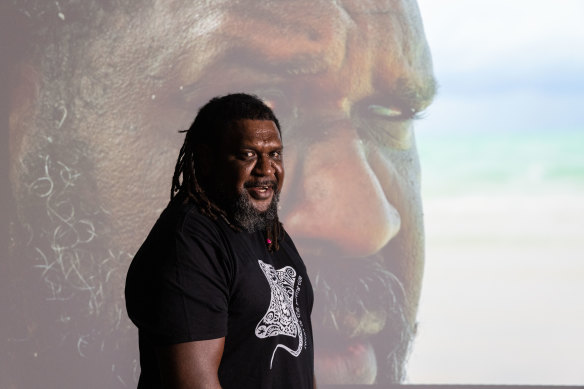 Winner of the NATSIAA multimedia award: Jimmy John Thaiday from Erub, Torres Strait Islands, with his artwork Beyond the Lines.Credit:Helen Orr

Other winners this year include Bonnie Burangarra and Freda Ali Wayartja, for their sculpture An-gujechiya which received the Wandjuk Marika Memorial 3D Award.

For all the diversity of the works in the NATSIAAs, MAGNT curator and Larrakia woman Rebekah Raymond says there are also similarities. “Many of these works talk about connecting to sacred skies, sacred lands, sacred waters, but there’s also works that speak about injustices and the toll of invasion on Aboriginal and Torres Strait Islander peoples, investigations and questions about histories – and not so far in the past, things that happened in the ’70s, there’s works that respond to current events,” she says. 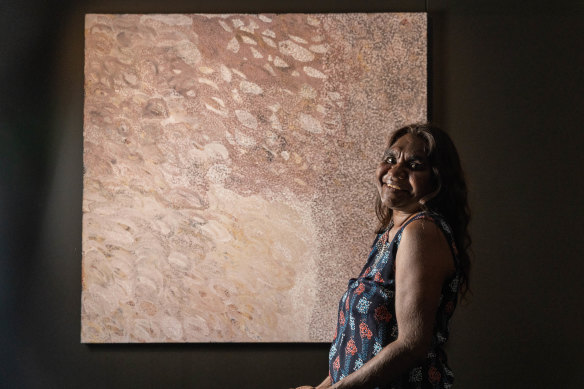 “Themes around health have emerged. Virus Man [by Ray Mudjandi] is one work that talks about the pandemic, [there’s] another about Ngangkari, traditional healing practices and traditional healers. There’s a work that talks about thyroid sickness… A young artist Tyrown Waigana talks about the way that perceptions and stereotypes shape how young Aboriginal and Torres Strait Islanders think about themselves. People have pre-conceived notions of who they are, how do people combat that? There’s a toll mentally that it takes to have those things pushed against you.”

Kerrie O’Brien travelled to Darwin courtesy of NATSIAA. The NATSIAA exhibition, including all 62 finalists works, is at MAGNT until January 15, 2023.