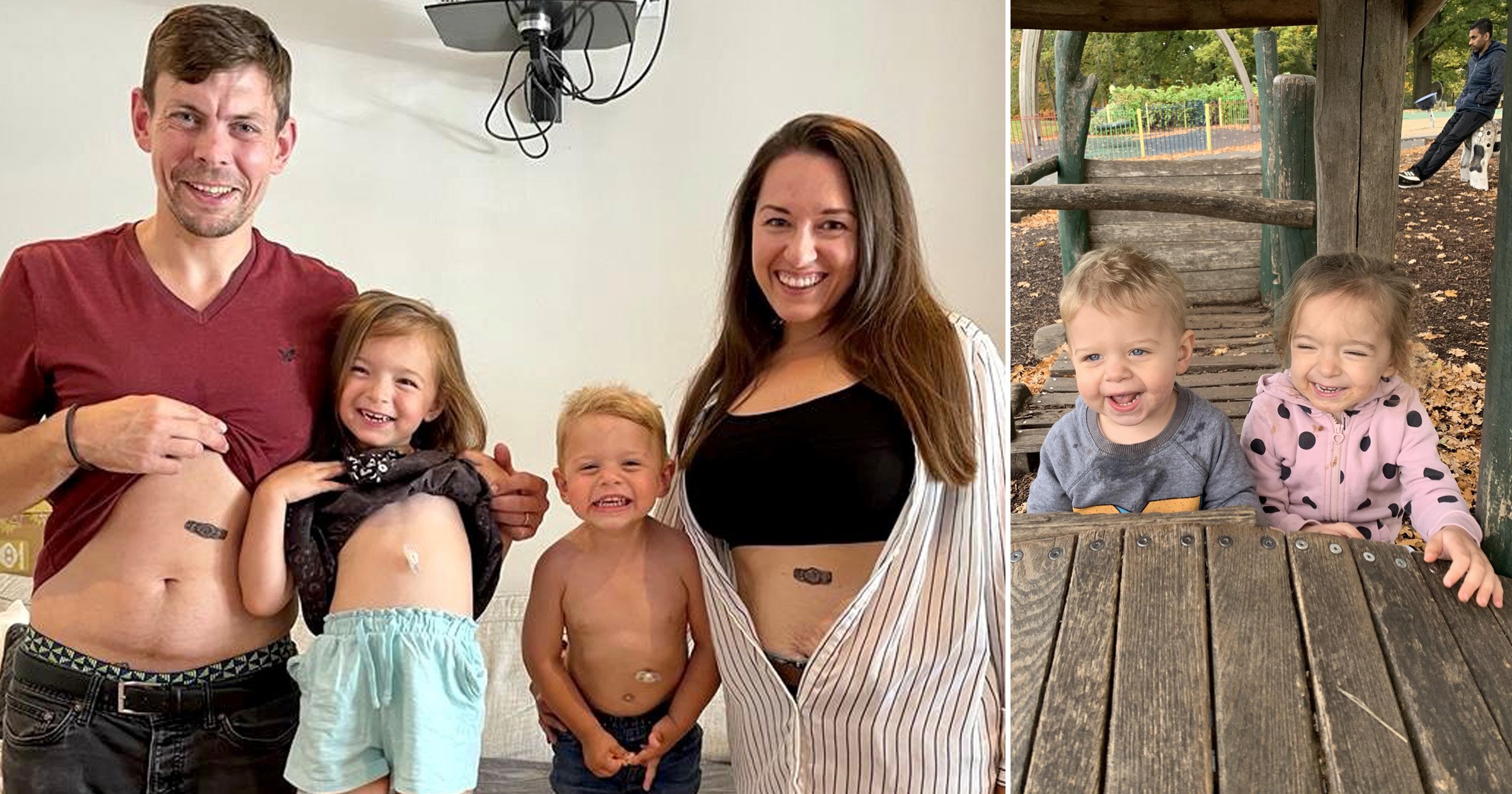 A couple have each got feeding tube tattoos in support of their two young children who both need one.

It can be life-threatening, as it affects the oesophagus (food pipe) and trachea (airway) so newborn babies who have it need emergency surgery.

Rebecca, from Sidcup in southeast London, said: ‘During her development in the womb, her food pipe mistakenly connected to her airway instead of to her stomach.

‘We didn’t know it at the time, but milk and saliva were going straight to her lungs. She was basically drowning.’

When Izzy was just two days old, she had surgery at Evelina London Children’s Hospital that saved her life.

Now, she has a button gastrostomy, which is a small feeding tube inserted directly into her stomach that allows her to get nutrients without swallowing.

Rebecca said: ‘She was admitted to hospital 16 times in her first year and even now can only eat what you would give to an eight-month-old, like purées and some fruits.

‘She can’t swallow fluid, and she can’t eat sandwiches, chicken nuggets or ice cream – the things that other four-year-olds like.’

When Rebecca and Tom’s son Will was born in October 2019, they knew something wasn’t right straight away.

The baby wouldn’t stop vomiting and was having trouble breathing.

He was diagnosed with life-threatening sepsis and, at just two days old, he was transferred to Evelina London Children’s Hospital for specialist treatment.

Rebecca, an administrator for the NHS, said: ‘We took a massive psychological hit when he too had to be transferred to Evelina London.

‘He stopped breathing twice and had to be resuscitated – it was a really frightening time.

‘Will spent three months in the hospital, where multiple tests were carried out which revealed that he too had a problem with swallowing.’

He was diagnosed with laryngomalacia, which is a birth defect where the larynx is soft and floppy.

When a baby with laryngomalacia takes a breath, the part of the larynx above the vocal cords falls in and temporarily blocks their airway.

Will has undergone surgery to make it easier for him to breathe, but he’s also not able to swallow as it results in chest infections.

So, just like his big sister, he had a button gastrostomy fitted before he was a year old.

Louisa Ferguson, a consultant in otolaryngology and cleft lip and palate surgery at Evelina London Children’s Hospital who operated on Will, said: ‘It is quite uncommon for two children in the same family to have such complex swallowing issues and for both to need a button gastrostomy.’

Rebecca said: ‘They both have a button gastrostomy so Tom and I decided to get matching tattoos.

‘We wanted to symbolise what we have been through as a family and show Izzy and Will that having a button is something to be proud of.

‘Izzy is obsessed with the tattoos, always asking to see them and saying: “Now we are all matching”, and Will has expressed his disappointment that ours don’t move.’

Tom, a PE teacher, has also undertaken a 400-mile bike ride across the Scottish Highlands to raise money for Evelina London Children’s Charity.

He said: ‘I did the ride for three reasons. Firstly to raise awareness of Evelina London Children’s Hospital and what they do – they are unsung heroes who save lives every day.

‘Secondly, to raise as much money as possible for this incredible hospital so that those who work there can continue to carry out amazing treatment for children who need it most.

‘Finally, I wanted to put myself through these tough challenges in order to thank Evelina London for saving my children’s lives – they will never know how grateful I am.’

Mr Iain Yardley, a consultant paediatric and neonatal surgeon at Evelina London Children’s Hospital who operated on Izzy, said: ‘As a family, the Goldings have faced some really significant challenges with the complex conditions that both Izzy and Will have.

‘It has been a massive privilege to be part of the huge team at Evelina London who looks after them and supports them as a family.

‘Watching children like Izzy and Will overcome these challenges to grow up and blossom is why we do what we do.’

'Vanderpump Rules': Stassi Schroeder Is Excited to Address Her Firing in First Interview

These States Have the Most Restrictive Gun Laws in America