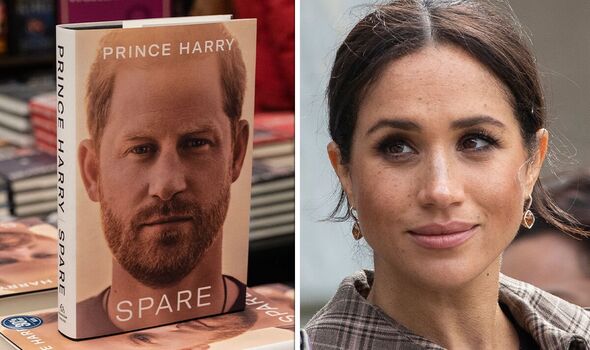 Body language expert Judi James and style and royal expert Miranda Holder shared their thoughts on Prince Harry and Meghan Markle’s most recent professional pictures taken by the same photographer, Ramona Rosales. One was a powerful photograph of Meghan used for the cover of Variety magazine and the other one was used for Harry’s new book and memoir, Spare.

The body language expert commented on Harry’s pose on the book cover saying: “This is not a photo to tell us Harry’s pain is now no longer baggage he carries with him.

“This headshot seems to create a mirror image for the reader, eye to eye and face to face, and it’s not an expression that seems to have been chosen to illustrate that inspirational man who has been saved by the power of love.”

Judi claimed the photo doesn’t show Harry as “a fun, smiling or playful man” nor as “the family man either, hugging his adoring wife and children”.

“This is a solo pose and a direct gaze (presumably to suggest openness and honesty) and there is only the faintest hint of a smile from a very tiny upward curl of one of the corners of his mouth,” she added.

Judi opined that Harry’s expression on the cover with the word “Spare” on it suggests “we are being invited into Harry’s grief, pain and sadness and he looks partly as though he is still hurting”. But why?

The expert explained: “Well, this is an asymmetric facial pose. Place your hand over one side of his face and he looks relatively relaxed and with that hint of a smile.”

However, if readers place the hand over the other side of his face, “the difference is quite shocking”.

According to Judi, “the eye expression looks darker and more intense and the lips are straight. So we are seeing two sets of signals in one shot”.

Royal and style expert Miranda Holder revealed some of the couple’s “styling secrets” in the recent portraits and the meaning behind their choice of clothes and accessories.

Meghan looked beautiful on the cover of the fashion magazine where she looked “empowered and determined,” some fans commented on social media.

For his new book, Harry looked serious in a photograph which was kept “deliberately simple”.

Harry wore an “unassuming T-shirt” as well as his dog tag necklace featuring A, honouring his son Archie, suspended on a black threat.

Spare: by Prince Harry, The Duke of Sussex

Prince Harry’s highly anticipated and revealing memoir, Spare, launches on January 10, 2023. Available to pre-order now on Amazon, shop to read the gripping story of his life growing up in the royal household.

Miranda commented that there is a similarity between the images but “the actual styling of the couple could not be more different,” she said.

Harry’s look is “unassuming, redirecting a gaze back into his eyes, there are no fancy clothes that detract from the message here,” the expert observed.

“Harry wants to set the record straight and he is about the bare his soul,” she claimed.

However, Miranda commented that Meghan “looks like a goddess” on the magazine cover.

“She oozes polished Hollywood glamours offset by that beautiful lighting and looks perfectly at ease in her jaw-droppingly expensive couture gowns as if Hollywood and the spotlight are her natural home.”

Miranda commented that “her petite frame offset by the structure of the garments portrays her as powerful whilst unafraid of being vulnerable. She’s embodying her feminity as a modern icon,” she suggested.

In his book, Harry talks about his relationship with his elder brother Prince William, the loss of his mother, Princess Diana, and his father King Charles among other deeply personal details and revelations.

Sundance secures US rights to Ten drama The Secrets She Keeps