“Lies, damn lies and statistics” wrote Samuel Langhorne Clemens, better known as Mark Twain, and nothing has changed since 1907.

Daily, a deluge of promises rains down on hapless Victorian voters, adding to the devastation of our actual floods. Sifting through them all to distinguish the real from the fantastic is nigh impossible and with just three weeks until this ordeal is over, most voters are not even trying to keep track. 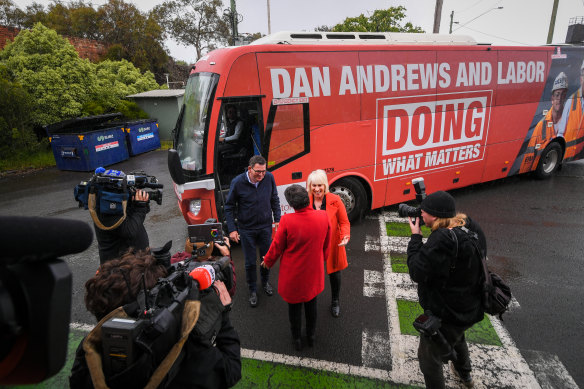 Premier Daniel Andrews and his wife with the campaign bus on Wednesday.Credit:Justin McManus

Pre-poll voting is available from next week – Monday, November 14. Many will choose to vote early and then tune out of the campaign. Strategists seeking maximum impact are therefore forced to bring forward big announcements rather than hold them back for what used to be a theatrical reveal in the final week of an orchestrated campaign.

Meanwhile, the respective vote-gathering machines driving each of the parties in this state election seem intent on numbing our senses. The backroom wizards and witches hope that we have the memory span of goldfish – that by tomorrow we will have forgotten the commitments made just today.

They may be right. The daily “announceable” is not about consistency – it is about controlling the narrative and sprinkling fairy dust liberally across the landscape in the hope that some of it hits a target and impresses just one more hapless swinging voter.

A million dollars here, a hundred million there, and then like magic yet another squillion bucks conjured out of nowhere. Despite the profligacy, so far neither the Liberal challengers nor the incumbent ALP have found a sure winner, a consistent narrative, a story that captures the imagination of our COVID exhausted community. 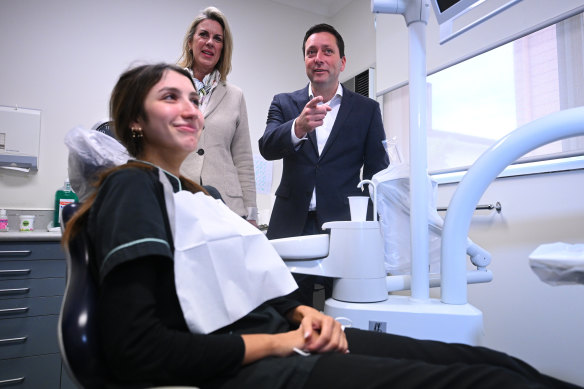 The absence of cohesion is itself a marker of the gymnastics our respective leadership contenders must perform. They are both trying to re-invent themselves, an imperative propelled by totally different forces.

Matt Guy would like to attack Dan Andrews on integrity but cannot raise it because he himself cannot shake the “lobster with a mobster” tag. Although our Independent Broad-based Anti-corruption Commission (IBAC) has been busy, and hampered by litigation delaying its output, the mud being flung – by the Liberals, by ALP internal enemies and the Herald-Sun – does not stick. Rumours are not facts, nor are they evidence.

Reviving the sad tale of Kath Andrews’ car crash with a cyclist nearly 10 years ago to try to smear the Premier and his wife’s reputation represents a new low and has deepened the ALP’s institutional suspicion of everything Murdoch-media related.

That the then teenager years later regrets taking his lawyer’s advice and now wants more than the $80,000 he agreed to in a settlement with the TAC is a non-story. 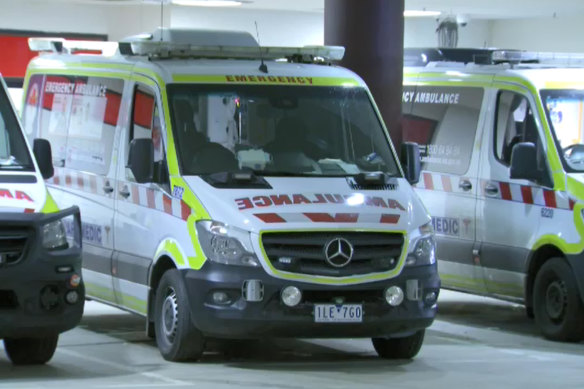 Health is one area where the government has failed to meet its targets and which the opposition should be highlighting.Credit:Nine News

The Opposition should be campaigning about the unarguable fact that a two-term government is often missing its own performance benchmarks in major portfolios, particularly health and education. Yet it seems incapable of landing a telling blow.

It is either laziness or a reflection of their dwindling networks and resources – and internal feuds – that leaves their analysis shallow and falling flat.

New initiatives miss their targets. Capped $2 public transport fares? Free school lunches, but without a means test? Who thought those were good ideas? Whilst superficially attractive, neither is fair nor economically sensible. A political party that has argued user pays for as long as anyone can remember now wants to be a subsidy champion? The result is brand confusion.

Besides, most parents want to have a say in what their children eat, and in what imaginary universe do kids eat what they are told?

Reinvention for captain coach Dan Andrews involves somehow convincing us that going into his third season, his inexperienced team of new recruits can outperform the effort put in over eight years by the core group of veteran players who have chosen to retire. How does he argue that whatever needs fixing after his first two terms is suddenly going to be attended to more effectively if he is given a third?

Instead, Andrews distracts us and shoots a few easy goals by giving billionaire Gina Rinehart the finger! The Premier’s much trumpeted $15 million rescue of the Diamonds, the national netball team, is almost as politically shrewd as the proposed vague plan to somehow and sometime in the future replace our dependence on multinational power companies with a revived State Electricity Commission supplying renewable energy.

Both announcements got the Premier maximum exposure for little effort or expense. The netball partnership – where he came to the rescue of the most popular women’s sport in the land cannot possibly have been put through the usual due diligence in the time available, but it will resonate particularly in regional Victoria.

Compared with the ongoing binge of $60 million annually for the F1 car race, the $15 million over 4 years for the netball is a bargain.

Jon Faine is a regular columnist.

Eileen Ryan, Actor and Mother of Sean, Chris and Michael Penn, Dies at 94

Free school meals: Interactive map reveals how many children in your area rely on scheme to eat