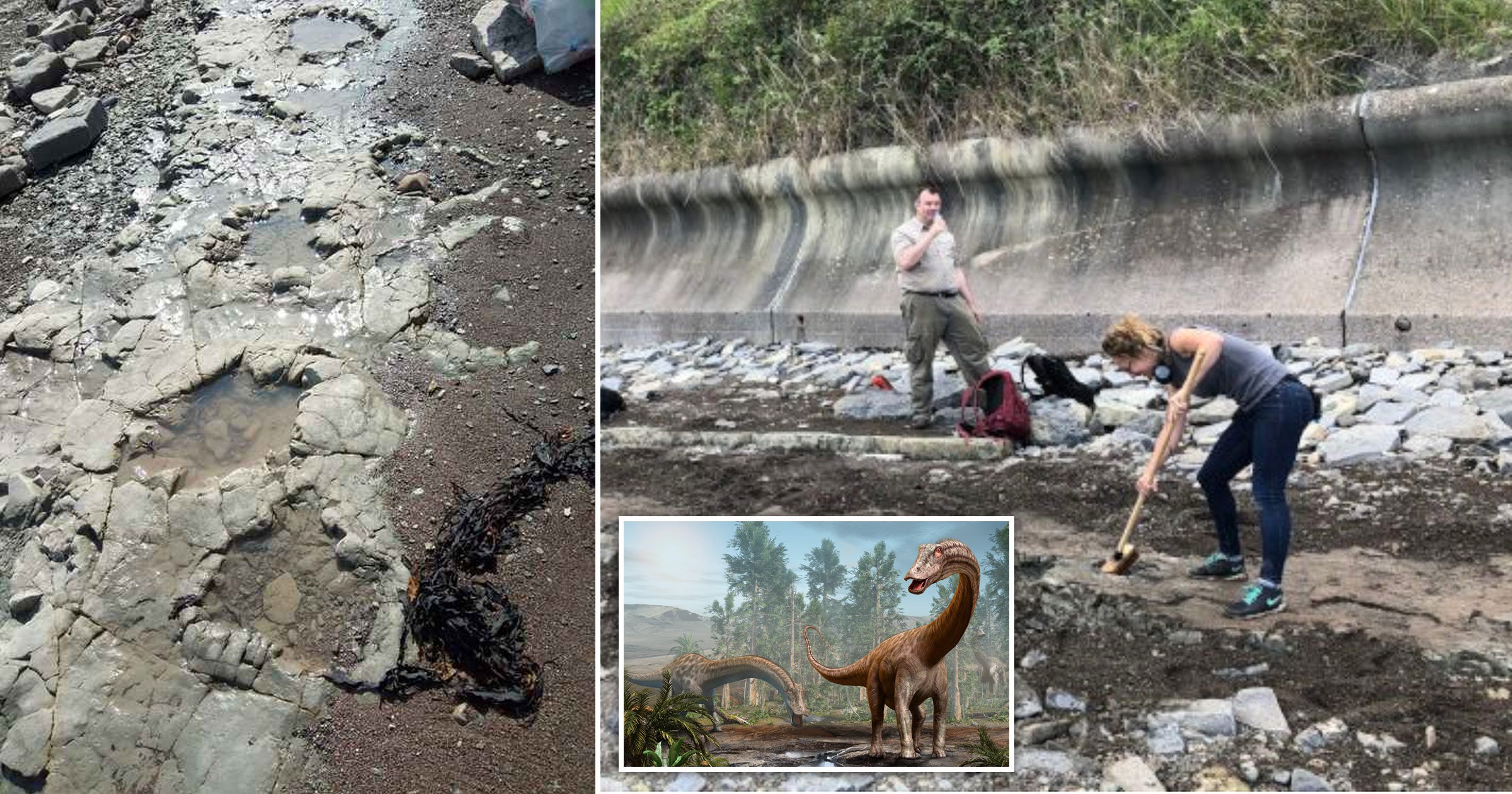 Dinosaur footprints unearthed at a beach have revealed how the beasts gathered on the land over 200 million years ago.

Scientists have been studying the series of markings left behind by a group of long-necked dinosaurs trampling on the ground.

Photographs of the prints have been used to create 3D models to allow researchers to examine them in more details.

Experts from the Natural History Museum have now published their findings of the markings – which are believed to belong to sauropodomorphs.

The species includes the well-known Diplodocus that moved through the area during the Triassic period.

The research was carried out after walker Kerry Rees reported the find in Penarth, near Cardiff, last year.

Prof Paul Barrett, of the Natural History Museum, says the number of footprints makes it possible the site was a place where sauropods gathered.

He said: ‘There are hints of trackways being made by individual animals, but because there are so many prints of slightly different sizes, we believe there is more than one trackmaker involved.

‘These types of tracks are not particularly common worldwide, so we believe this is an interesting addition to our knowledge of Triassic life in the UK.

‘Our record of Triassic dinosaurs in this country is fairly small, so anything we can find from the period adds to our picture of what was going on at that time.’

The findings of the study, carried out by scientists across the UK and France, have now been published on the journal Geological Magazine.

Scientists say the shapes have raised edges which are known as ‘squelch marks’ – where the dinosaur has pushed its foot into the mud.

The tracks can then be baked dry by the sun and turned into trace fossils.

Prof Barrett added: ‘Trace fossils are those that capture aspects of an animal’s behaviour or anatomy which aren’t captured by its skeleton.’

The prints at Penarth have come to light over the years – with the first recorded finds dating back to at least 1879.

Lead author Dr Peter Falkingham said: ‘The tracks initially seemed a bit non-descript, and it took us quite a while to decide if they really were tracks or just holes in the ground.

‘When we looked closely, it seemed that the impressions would overlap in places, as would be expected if multiple animals were trampling the ground.

‘They also seemed to sometimes occur in semi-regular spacing as you’d expect from a trackway.

‘The best evidence actually came from a track that isn’t there anymore but was documented in 2009, which I used to build a 3D model of the site.

‘One of the tracks visible in that model had what we interpreted as digit impressions, and that sealed the deal for us that they were indeed tracks.’

The position in the rocks suggest the tracks were formed in the Late Triassic between 237 and 201 million years ago.

Why Kate Middleton Was Just Spotted Without Her Engagement Ring

Buy your dream home in the Italian countryside for ONE EURO

She Sings! Cara Delevingne Shows Off Her Vocal Chops in New Burberry Ad