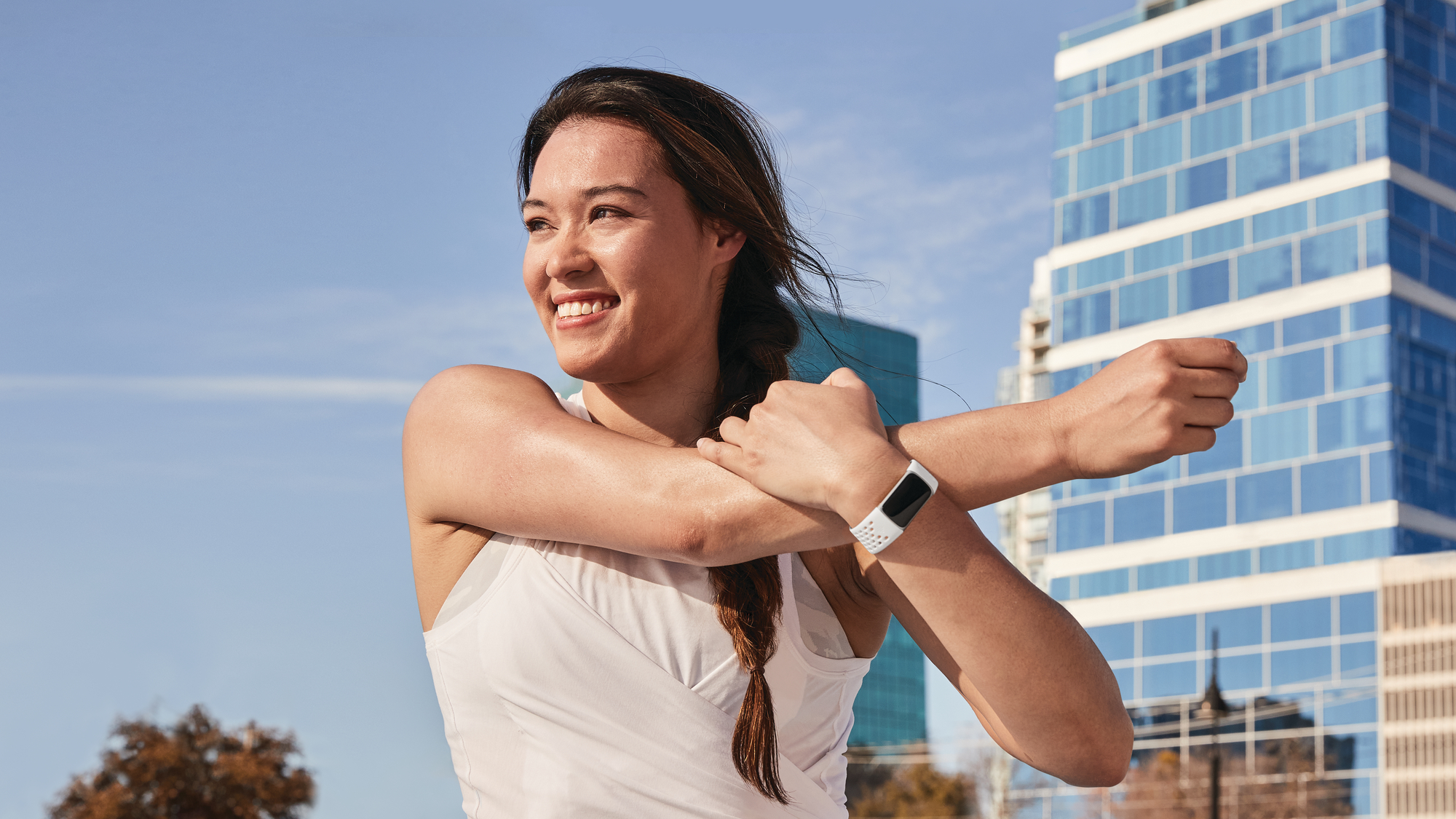 Fitbit’s Charge activity trackers offer the best balance of features and design for those that want basic level fitness tracking.

They can’t offer everything a smartwatch can – but, at the same time – are small and comfortable enough to almost forget you’re wearing them. I’ve been using them since the Fitbit Flex and am a huge fan of the discreet form factor.

Last year’s Charge 4 was, in my opinion, the best fitness tracker you could buy. It was light, comfortable, had on-board GPS and was backed up by Fitbit’s excellent smartphone app and community.

Those points are all true of the newly-unveiled Charge 5, but I feel the 2021 effort has a few shortcomings that stop it from achieving greatness.

Let’s start with the good stuff, though.

The design has changed in a pretty big way. The Charge 5 casing is now 10% thinner and swaps plastic for rounded aluminium. It instantly looks and feels more premium than the Charge 4. It’s very comfortable to wear for long periods of time.

That also goes for the screen, which is now a full-colour AMOLED touchscreen display. It’s the first time we’ve seen colour on a Charge tracker and it’s plenty bright enough (twice as bright as the Charge 4) to see outdoors. There are a range of watch faces you can download through the Fitbit app to customise the tracker and show you the metrics you care about.

Fitbit has also loaded the Charge 5 with as many health-tracking features as it can. Alongside the aforementioned GPS, you’ve got heart-rate tracking, blood oxygen sensors, an EDA (electrodermal activity) stress monitor plus an ECG (electrocardiogram) sensor.

The stress checker is carried over from the Fitbit Sense smartwatch and makes its debut here in response to Fitbit saying data showed 40% of adults felt stressed throughout 2020. Which is hardly surprising, really.

You can track a range of different workouts like running, cycling or swimming as well as set a vibrating alarm, use a stopwatch or pay with Fitbit’s contactless Fitbit Pay system.

Finally, there’s battery life. Which is far beyond what you’ll get with a smartwatch. Fitbit estimates up to 7 days of usage if you use it carefully. Multiple GPS-tracking workouts and switching the screen to always-on will likely deplete it in under four days. I killed it in less than five. But that’s still far and away better than having to charge it every night. You can leave the house on a short trip and not worry about having to bring a charging cable with you.

As a fully featured fitness tracker, the Charge 5 gets just about everything right. Unfortunately, there’s a significant drawback that impacts the way you use it that I struggled to get past.

Fitbit has removed any kind of physical button (or haptic replacement) in favour of a completely touch-focused UI. It means you have to swipe through the menu to get to where you want to go and then swipe backwards to return. You can also double-tap on the screen to return to the home screen but I found this rarely worked for me. Instead, I would accidentally activate a workout or start the stopwatch. It’s frustrating and made even worse when you’re stabbing at the screen because you’re in a hurry.

The lack of a button is because the two side panels of the tracker are used for the EDA sensor. When activated, you put your fingertips either side and hold for three minutes while it measures how stressed you are.

So many times (muscle memory from the Charge 4) I went to tap the side of the tracker to get back to my home screen to no avail. On the Sense smartwatch, the ‘button’ could also be mapped to a customisable shortcut, like Fitbit Pay.

It’s probably something you’ll get used to using if you wear the Charge 5 for an extended length of time – but I feel it’s a step backwards where usability is concerned.

I’m happy to say that the actual tracking (which, lets face it, is what you buy a tracker band for) seems to be as good as ever. I took the Charge 5 out on a run alongside the Apple Watch Series 6 to see how they fared against each other. According to Apple’s wearable my 3.22-mile run took me 25 minutes and 17 seconds at an average pace of 7’50” per mile. My average heart rate ticked up to 172bpm.

The Charge 5 (literally) on the other hand, recorded 3.27 miles at 25 minutes and 25 seconds at an average pace of 7’46” per mile. Meanwhile, my heart was less troubled according to Fitbit as it stayed at an average of 151bpm.

Fitbit is giving away 6 months of Premium membership with the Charge 5 and the company’s fitness ecosystem is a big part of why it’s so good. You get breakdowns on your sleep patterns as well as advanced reports on your Wellness and lots of guided workouts, recipes and challenges to do.

It also gives you a daily ‘Readiness Score’ which is new for the Charge 5. It’s not available quite yet, but when it launches it’ll give you a score calculated by an algorithm. It works by analysing three different health stats: the previous day’s level of activity, the previous night’s sleep and the overall heart rate variability from the last few night’s sleep.

Fitbit says the score is a way of measuring when to work out and when you need to prioritise rest and recuperation. The higher the Readiness Score, the more you can push yourself when it comes to exercise.

The app has always been very well presented and easy to navigate and, I think, one of Fitbit’s core strengths.

But there are also other niggling issues I have with the Charge 5 that I think Fitbit should really address by now. For starters, it’s great to have GPS on board so you can go for a run without your phone, but I can’t understand why there isn’t any on-board storage for loading up some music or a podcast to enjoy while you’re out pounding the pavement? If I could add one thing to the Charge 5, it would be that. Especially considering Fitbit has dropped the Spotify support that would allow you to control playlist playback from your wrist.

My next query is why Fitbit decides to implement a whole new charging system (still proprietary) for the Charge 5. There’s no way of using your cable from a Charge 4, 3 or 2 to power up the Charge 5.

Similarly, if you want to change the strap, you’ll have to buy a whole new one of those too – you can’t recycle, for example, the snazzy reflective woven band that you may have picked up with the limited edition Charge 4. There’s a reason Apple doesn’t change the connectors of the Apple Watch – because it means customers can reuse their old straps and charging cables should they wish to.

Just as an aside, it would also be nice to be able to have more than one Fitbit device paired to an account/phone at any given time. If you have, for example, a Sense or Versa 3 smartwatch for serious tracking but want to wear a smaller Luxe or Inspire 2 at night to sleep, you can’t – you have to pick one.

I liked the Charge 5, but I don’t think it brings enough to the table to warrant an upgrade from the Charge 4. The screen is lovely and the fitness tracking is excellent – but the UI needs work and the inclusion of a stress sensor isn’t enough of a differentiation on its own.

Average fitness enthusiasts who aren’t wedded to a particular ecosystem will still enjoy and get a lot out of the Fitbit Charge 5. And if you’re still using a ChargeHR or Charge 2 then it’s a great update.

I’m a huge Fitbit fan and want the products to succeed but given this is arguably Fitbit’s hero device, I can’t help feeling it could be better.

Where can I buy one: From the Fitbit online store or, alternatively, on Amazon here.