Home » Technology » Why Play a Music CD? ‘No Ads, No Privacy Terrors, No Algorithms’

How do New York Times journalists use technology in their jobs and in their personal lives? Ben Sisario, a reporter who covers the music industry, discussed the tech he’s using.

What are your most important tech tools for doing your reporting?

Probably 75 percent of my reporting is done by phone and email, and when I am writing I print out drafts and notes. So that part of it is about as current as 1995. But I also use Signal and ProtonMail for sources who require secure communication.

I constantly scan social media — Twitter, mostly — for news, and in breaking news situations I sometimes find sources to quote there. But I am wary of letting social media itself tell the story.

When it comes to organizing my work, I think cloud computing is the greatest thing since the manila folder. I have 15-plus years of notes instantly searchable through Dropbox and Google Docs. It’s amazing to type in five characters and find that phone number from an obit you wrote a decade ago.

And then there are sites like WhoSampled and Discogs, incredible repositories of information that are deeply addictive for music nerds like me. My time there often starts with legitimate research — say, checking the original writing credit on an old single — but then an hour later I’ve spent $50 on vinyl and reminded myself of the slide whistle sample on “Groove Is in the Heart.” 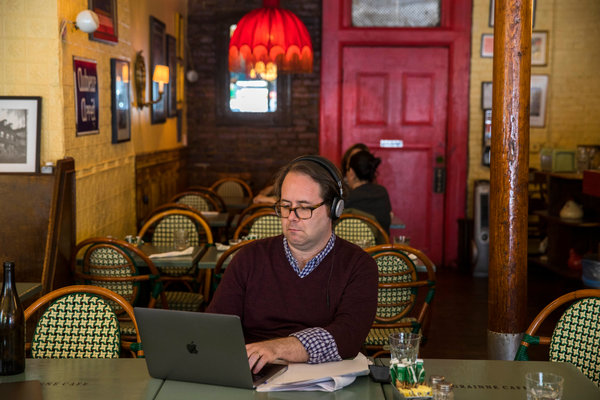 What does your music setup look like, and how has it evolved over time?

I try to keep an eye on all the major platforms out there, which means regularly poking around on about a dozen apps. My go-to sources are Spotify, SoundCloud, Bandcamp and Mixcloud, which has excellent D.J.-style mixes and to me feels more human than most.

At home I have a Sonos Play:5 speaker, which plays streaming music and podcasts, and is a piece of cake to use. I also have Google Chromecast Audio, a little plug-in device (now discontinued) that allows me to send high-fidelity streams to my stereo. It sounds better that way, but it’s not nearly as easy to use as the Sonos.

To be honest, my preferred way to listen to music is on CD, as unfashionable as that might be. You push a button, the music plays, and then it’s over — no ads, no privacy terrors, no algorithms!

What are the pros and cons of the streaming model for musicians big and small?

The big positive is the vast potential exposure. Streaming eliminated the cost barrier to sampling new music, and playlists constantly put new songs in front of people. Theoretically, at least, there are more chances than ever for a song to be a hit.

But, as they say, you can die of exposure. Megahits still generate millions of dollars in royalties, and Spotify’s official mission statement is “giving a million creative artists the opportunity to live off their art.”

Yet for artists beneath the megahit level — and that is the vast majority of them — the jury is still out. I’ve seen royalty statements for well-known indie acts that suggest they can earn a decent middle-class living from their streams. I’ve also talked to very successful songwriters who say their income has been decimated by streaming and by the new model for pop songwriting, in which five or six — or 30 — people divvy up the same sliver of royalties.

In general, though, I’m optimistic about streaming and its potential. It has reinvigorated the music industry and made listening a lot easier, more fun and more dynamic.

Apple and Spotify have been fighting publicly over antitrust issues. Where is this fight going, and what impact might it have on streaming music?

I tend to think of this as mostly a matter of corporate warfare. These companies are in a race for market dominance around the world, and the gloves are off. For Spotify, anything that hinders Apple, even a little, can provide an advantage. On the other hand, Apple’s gigantic size means it will always be on the defensive against regulation.

I don’t see these issues having a big effect on streaming music. Competition in this market has benefited consumers, and as much as Spotify accuses Apple of anticompetitive practices, it has still signed up far more users — both free and paid — than Apple Music.

What emerging tech trends might change the way people listen to music?

A great deal of attention is being paid to smart speakers like Amazon’s Alexa. This is something that genuinely feels futuristic: walking into a room and saying, “Play relaxation playlist” or “Play NPR news,” and it just happens. I think we’re still in the early stages of this.

Video sharing apps like TikTok are also having a palpable effect on music, and I think that will only grow. TikTok makes it easy to generate video memes using music, and these are fast moving and viral by nature. The best example is Lil Nas X’s song “Old Town Road,” which was a TikTok sensation well before it hit the pop charts.

Outside of work, what tech product are you currently obsessed with?

Not to be too much of a grouch, but for me it is more about an opposite kind of phenomenon: What formerly hyped, supposedly essential technology has since been exposed for gross privacy violations, or for how easily it has become a tool for predatory disinformation?

Way too many of them, of course, but the really dispiriting thing is realizing that it is nearly impossible to disengage. We have become only more conscious of the risks and dangers surrounding us at all times.

That said, in my house we are really happy with our Instant Pot Duo, a beeping digital pressure cooker that makes perfect biriyani or chicken soup in like five minutes. I really hope it is not collecting any private data.

Ben Sisario covers the music industry. He joined The Times in 1998, and has contributed to Rolling Stone, Spin, New York Press and WFUV. He also wrote “Doolittle,” a book about the Pixies. @sisario

I'm A Celebrity 2021: Who was the second contestant eliminated?