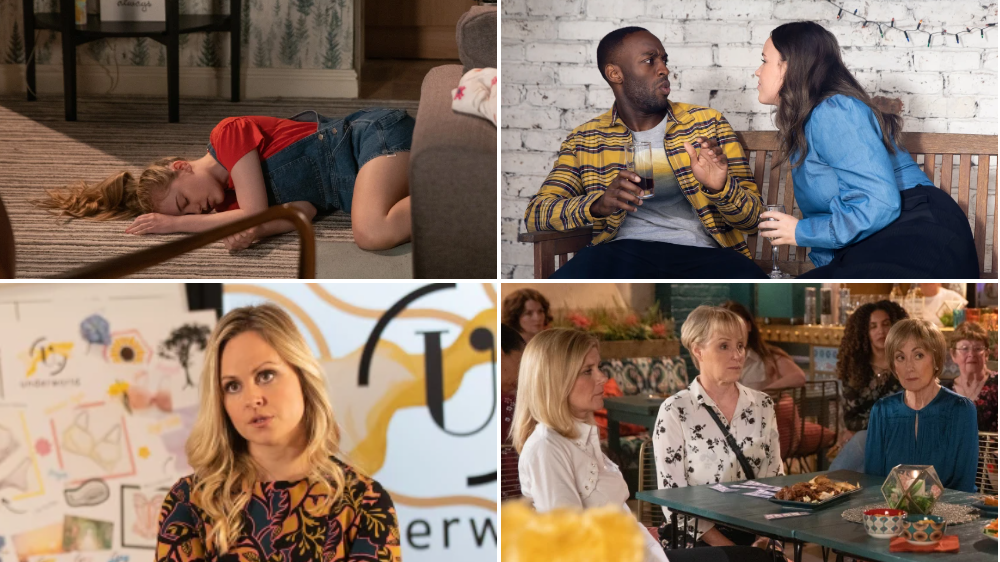 Relationships are strained in next week’s Coronation Street as, in the wake of feeling pushed out by her family, Audrey Roberts (Sue Nicholls) takes the brave step of opening up to her loved ones that she tried to take her own life.

Elsewhere, Faye Windass (Ellie Leach) is pushed to the limit by Craig Tinker’s (Colson Smith) excessive fussing over her and, when he moves out, she later finds herself leaning in for a kiss with another man.

Over afternoon tea, Audrey’s attention is drawn to the arrival of Claudia and Charles in the hotel dining room. As Claudia rows with Charles, she’s amazed when Ken, Audrey and Rita pop out from where they’ve been eavesdropping. As they comfort Claudia, Rita remembers it was Audrey’s birthday recently.

Audrey makes a shock announcement and a stunned hush descends, broken by the arrival of a waiter with a cake, singing Happy Birthday to Audrey.

Craig asks Carla not to put Faye under pressure at work. Faye tears a strip off Craig for humiliating her in front of her boss. Craig apologises to Faye for doing her head in but when he presents her with a special nightie designed to keep her cool and improve her sleep, she’s distraught.

Craig asks Faye if he should move back to his mum’s. When she tells him to do as he pleases, Craig starts to pack.

Spider’s uneasy when fellow protestor Griff introduces himself to Toyah. Toyah invites herself along to their demo. Back from the protest, Spider tries to convince Toyah that Griff’s a loose cannon and she should steer clear as she’s on bail.

Zeedan learns from Craig that the detective Stu accused of persecution took early retirement for a spurious reason. Zeedan asks Craig to try and find out more. Yasmeen and Zeedan receive letters from Stu begging them to visit him in prison.  Yasmeen rips them up and bins them.

Craig breaks the news that Stu could be released within a matter of days. Yasmeen delivers a speech about domestic abuse to the fundraiser guests, but she becomes visibly panicky. Roy calls at Speed Daal only to find Yasmeen suffering a panic attack and struggling to breathe.

Meanwhile, Zeedan waits for Stu in the prison visiting room. Stu tells Zeedan about his case files and how he intends to prove his innocence. Zeedan calls at the solicitors’ office and asks Adam to request Stu’s case files.

Faye watches Craig and Jess larking about at their community engagement stall and is hurt that he appears to be enjoying himself. Carla congratulates the factory workers for getting the order out ahead of time and cracks open the fizz.

In the Rovers back yard, Faye makes a pass at Michael, what will he do?

Summer calls at the garage to find Aaron nursing a fat lip. Aaron hurries away. Summer catches up with Aaron but when she quizzes him again about his injury, he snaps.

Aaron apologises to Summer and reveals that the person who caused his injuries is his Dad. Aaron explains that his Dad’s an alcoholic and occasionally lashes out.

Audrey calls at No.8 and announces her plans to give the salon a complete makeover with no expense spared. Stephen tells Ken and Rita about Audrey’s plans to reopen the salon and Stephen realises they know more than they’re letting on.

Stephen grills Audrey and Audrey lies, making out she had a minor health scare. Stephen suggests that now would be a good time for her to sign the trust fund paperwork, Audrey insists she’s not in any rush.

Summer gets A*s in French and Maths, but an X for English after being disqualified. Aaron calls to collect Summer for their holiday.  Suddenly Summer collapses, throwing Aaron into panic. Summer regains consciousness and explains to Aaron that she accidentally forgot to take her insulin.

Summer and Aaron head back from the tram station and explain to Todd that they missed their flight. In the flower shop flat, Aaron rummages in Summer’s bag and is shocked at what he finds.

In the factory, Michael points out that the Underworld website needs updating. Sarah asserts she’ll give Lorenzo, his web designer a call, but Stephen offers to do the work himself with Max’s help.

Sarah reveals that she called Lorenzo after all, only to discover that he’s owed six months’ wages. Stephen lies to Sarah and makes out that he withheld Lorenzo’s wages as he caught him embezzling money from the company.

Adam meets up with Zeedan in Victoria Garden and confirms that he can access Stu’s case files but it will cost £1200. Zeedan puts pressure on Alya to help him do right by Stu and go halves on his legal fees. Zeedan and Alya call at Adam’s office and, handing him the £1200, confirm they’d like sight of Stu’s files.

In the Rovers, Leo rails at Steve about the scaffolding at No.1 and explains how he tripped over it and injured his ankle. Ed returns to work and by way of a thank you for looking after the business, offers Paul a pay rise.

Arnie calls at the cab office and explains to Steve that he suffered a mini stroke but he’s now ready to carry out the work on his roof.  Steve reluctantly agrees to cancel Ed.

How 2020 has revived the once-dying sport of hunting