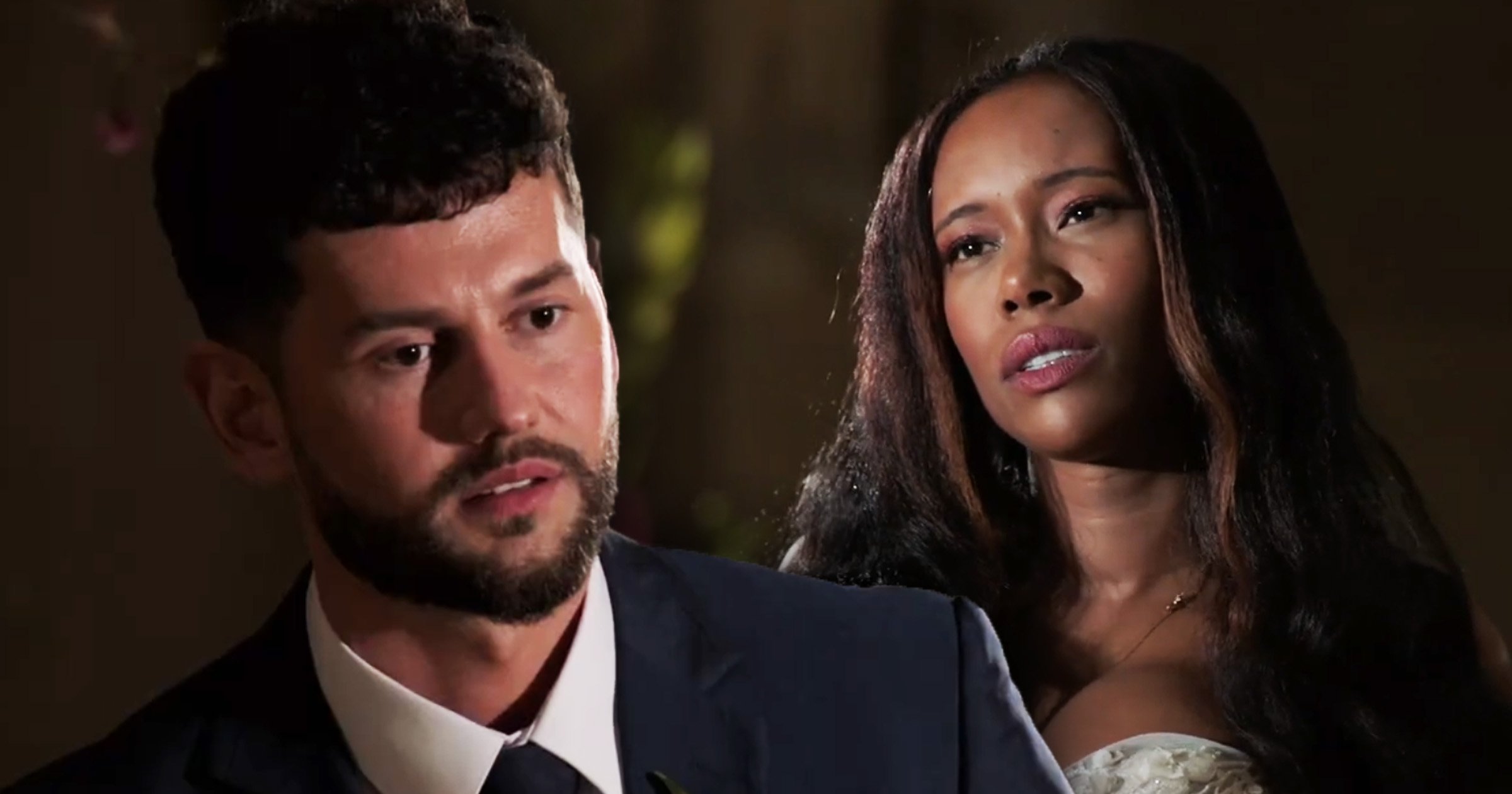 Married At First Sight newlyweds Duka Cav and Whitney Hughes have had quite the rollercoaster ride during recent episodes of the E4 show.

After meeting at the altar for the first time and tying the knot, Whitney made it clear she wasn’t interested in Duka, after revealing her high expectations.

Speaking to the camera after saying their vows, Whitney had brutally shared: ‘I wanted a man who’s a man that’s towering over me, like massive, like a brick house. Compared to a house, maybe he’s a shed.’

Then, while on their honeymoon, Whitney slammed Duka as ‘fake’, accusing him of putting on an ‘act’ and rejecting a replacement wedding ring after she lost hers.

Rows have followed with Whitney tearing up at commitment ceremonies, Duka moving into their apartment alone and the couple eventually trying to work things through with a ‘fresh start’.

But now, having watched back Whitney’s comments to the camera after episodes aired, Duka has shared his thoughts and responded to being called fake.

In an exclusive interview with Metro.co.uk, Duka said: ‘Had I known at that point in time how she was making fun of my name, not only disrespectful to me, but my background, my culture as well, it’s not about leave or stay or all that, I would’ve left there and then no questions asked.’

He continued: ‘Not to use these heavy words, but the whole thing of body shaming, “Oh his arms need to be bigger,” I’m like, a six foot two man that’s 16 stones, I’m healthier than 99.9% of the public.’

‘It’s almost that sometimes – this is a blanket statement – that women get a pass in what they think and feel of a man, but yet, if the men were to wear the same shoes they would get cancelled.’

When asked if Whitney had apologised for her behaviour, including those comments and calling him fake repeatedly, Duka confirmed she had not, but added: ‘Sometimes people they know they are wrong, and they still double down in their own behaviour and their own mannerisms and their supposed lack of self-awareness.

‘For me, I don’t need apologies from other people. Everyone can see what’s going on – any logical, intellectual human being.’

As for Whitney labelling him ‘fake’, Duka told us that plenty of people had been ‘coming to [his] corner’ by commenting on his social media posts, including customers from his previous jobs.

‘They’re not family, they’re not friends, strangers who I served in coffee shops 16 years ago that are saying I’m exactly as I seem face to face and on camera now.’

He added that his ‘character’ and ‘body language never changes,’ continuing: ‘My demeanour, my characteristics, everything that I’ve seen that changes when it comes to other people is that they go backwards and forwards.

‘They say one thing one second and another thing another second. All of that is for people to see.’

He added: ‘All these allegations to be coming from x, y, z, usually people that do that, it’s called self-projecting and usually they self-project on the people that have actually got the most strength to be able to take it on board.’

During an emotional dinner party with the other couples, Whitney left the table and walked out in tears.

‘He’s fake, everyone’s got genuine people and I’ve just got this fake person,’ Whitney sniffled. ‘Everyone keeps telling me “try, try”, I can’t.’

After getting some fresh air, she explained to the camera that she was overwhelmed by the situation at hand and I ‘felt like what the f*ck am I doing here.’

Many viewers have called into question Whitney’s behaviour, and haven’t held back their opinions on social media.

‘I’m sorry but Whitney hated Duka before she even met him and then criticised every single physical element to him as soon as she saw him at the alter,’ one pointed out.

Amid the discourse, Whitney took to Instagram recently to post a statement addressing the abusive messages she’s been sent. In that message, she also teased that all will soon become clear.

‘I’ve always been in two minds about whether or not I should speak up about what I’m experiencing but that has put me in an uncomfortable position in the past,’ she began.

‘Equally, it is impossible to explain my side of things without bringing down others and that is not what I want to do.’

‘We’re only two weeks in, a lot more will unfold in the next few weeks,’ she continued.

‘One of many things this experience has taught me is patience but whether or not you change your opinion on me, it’s never going to be ok to personally send me or others vile messages/comments. I can’t imagine doing that effects your life in a positive way, that energy could be used to show love to anyone you support.

‘Putting that aside, I would like to say a massive thank you to the people reaching out to show support. It honestly means so much.’

Married At First Sight continues on Monday at 9pm on E4.

Martin Lewis warns Brits ahead of energy price cap which could rise to £3,600