Sunetra Sarker has shared a potential paranormal experience which left her ‘petrified.’

The actress, 47, is a believer in the unknown, and even had a close encounter of her own while filming a show for Channel 4.

In 2004, Sunetra, along with the likes of Louise Delamere, Jo Joyner and Francis Magee, starred in comedy-drama No Angels.

And it appears there was quite a bit of drama involved, as she’s now opened up on a terrifying experience with what she believes was a ghost – or possibly ghosts plural.

Sunetra told her story on Thursday’s Loose Women, where the panel were discussing haunted houses and whether realtors should tell potential buyers if the property is believed to be haunted.

Speaking to fellow panelists Charlene White, Sophie Morgan and Nadia Sawalha, Sunetra recalled how No Angels was being filmed in a ‘disused psychiatric asylum.’ 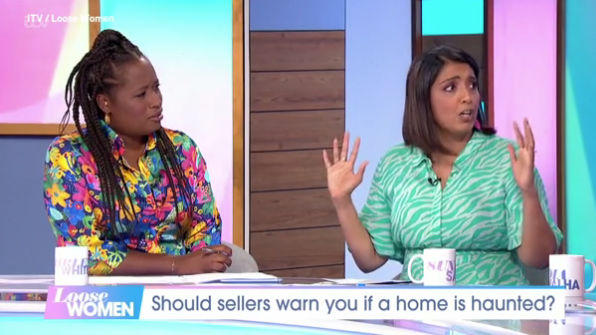 The cast were told a lot of ‘really dark, sad things’ had happened in the former hospital, which still contained ‘padded cells’ and ‘electrocution chambers.’

Sage was burned in rooms before filming, she said, and added they hadn’t been told they were filming in a place ‘renowned for being full of these awful things.’

As two of the cast members were filming a scene on a bed, co-star Kaye Wragg stopped for a ‘makeup check, and everyone heard it – two voices saying “Get out! Get out!”‘

Just as the tension was at its highest, a prankster on the Loose Women crew suddenly started flickering the lights on an off, prompting the four women to scream before bursting into laughter.

‘What is wrong with you people!’ Sunetra yelled, before launching back into her story.

‘Everyone looked at each other,’ she said.

‘Then their bed broke! And the props department came and every screw had been taken out of the entire bed.’

Charlene, a bit more of a cynic than Sunetra, suggested that ‘someone could have set that up’ as a prank, but relented it ‘is possible’ it was a true ghost encounter.

Sunetra was having none of it however, insisting: ‘We don’t have time!

‘No one has the time to take all the screws out the bed for a prank We were all petrified!’

Pope is invited to North Korea, indicates will consider it