Therese Coffey tells Naga ‘other outlets want to speak to her’

With plans aimed to improve access for members of the public to their GPs as well as the pressure to clear the NHS backlog, Health Secretary Thérèse Coffey joined BBC Breakfast’s Naga Munchetty and Charlie Stayt to address how the government planned to do so. However, after being put on the spot throughout the chat with Munchetty, the Deputy Prime Minister made it clear when she felt she’d had enough.

The moment came when Munchetty quizzed: “So the Institute for Fiscal Studies says the government has to borrow £100billion to cover the energy crisis…

“So your proposals to the NHS is not going to add to that £100billion at all?”

Coffey replied: “The NHS already has substantial funding, as I said, well over 40 percent of day-to-day spending.

“The Prime Minister has set out her priorities, it is about making sure we grow as an economy, that we have energy, both helping households and businesses in the short-term, and also, in terms of our health.” 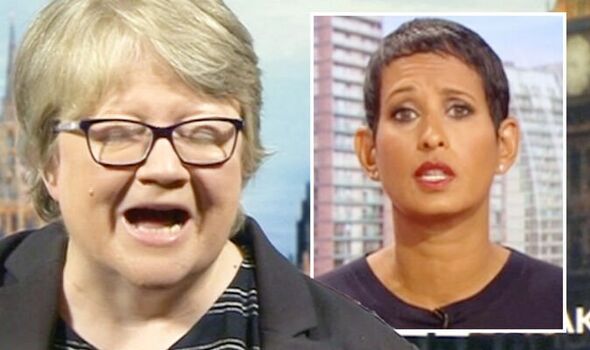 Before she could delve further, Coffey had clearly taken note of the time as the clock approached the 7:45am mark.

Keen to bring the conversation to a close, Coffey told Munchetty outright: “And I’m conscious, Naga, dare I say it, with our plan for patients, many other media outlets are keen to speak to me today as well.”

However, Munchetty wasn’t going to let the interview end on Coffey’s terms as she weighed back in: “Indeed, one more question then, just with your Deputy Prime Minister hat on…”

Coffey sat open-mouthed as if ready to say her goodbyes as Munchetty continued: “San you just give an idea of feel of how this government is different when it comes to economic strategy to the previous Conservative government?”

Coffey answered rather concisely: “The Prime Minister and the Chancellor are unashamedly pro-growth.

“We will be unlocking any regulations supporting opportunities to grow in a much more accelerated way and of course, the Chancellor will be speaking tomorrow.”

Munchetty then decided the time was up and bid Coffey farewell, allowing her to attend to her other media duties.