Friday’s Astroworld festival disaster in Houston, where at least eight people died and others were injured as a large crowd surged and panicked, recalled other similar events that have happened over the years.

In 1979, for example, 11 people died at a concert by the rock band The Who at an arena in Cincinnati. The band has blamed the disaster on “first-come seating,” which encouraged fans to rush toward the stage, according to the Associated Press.

Band members Roger Daltrey and Pete Townshend said in December 2020 interviews that the Cincinnati tragedy has long haunted them.

“It’s something that never, ever goes away,” Townshend said. “You never stop thinking about it. … Young people, really young kids.”

In 1989, nearly 100 people died in a human crush at a soccer stadium in England. Many fans were pressed against metal fences or were trampled by others in the crowd, according to the AP. 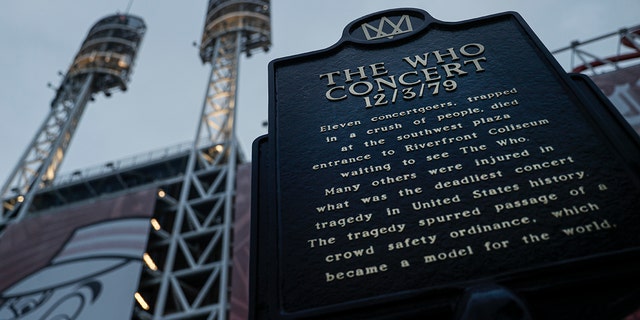 A memorial plaque for 11 concertgoers killed at a 1979 Who concert stands between Great American Ballpark and Heritage Bank Arena, in Cincinnati, Nov. 20, 2019 photo.

But an inquest years later revealed numerous instances of wrongdoing and mistakes by authorities that were considered contributing factors in the deaths, the news service reported.

In 2015, two crowds converged at the hajj pilgrimage in Saudi Arabia, resulting in more than 2,400 deaths. 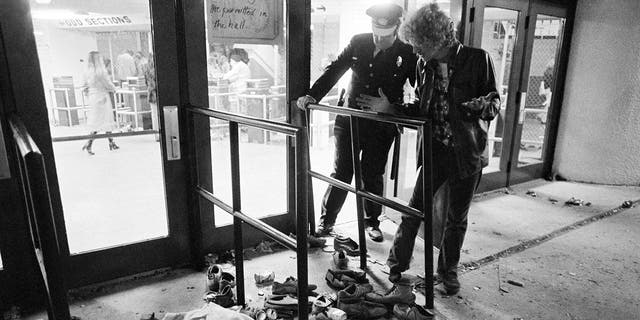 A security guard and an unidentified man look at an area where several people were killed as they were caught in a surging crowd entering Cincinnati’s Riverfront Coliseum for a concert by the British rock band The Who, Dec. 3, 1979. (Associated Press)

Saudi authorities said at the time that the groups converged down a narrow road, resulting in suffocations and trampling, despite billions of dollars spent on crowd control and safety measures for an event that can attract 2 million to 3 million people each year.

Oct. 20, 1982 — Sixty-six people die in a crush of fans leaving a UEFA Cup match between Spartak Moscow and Haarlem, of the Netherlands, at Luzhniki Stadium in Moscow.

May 28, 1985 — Thirty-nine people died in fan violence at the 1985 European Cup final between Liverpool and Juventus at Heysel Stadium in Brussels.

March 13, 1988 — Ninety-three people are killed when thousands of soccer fans surge into locked stadium exits to escape a sudden hailstorm in Kathmandu, Nepal.

July 2, 1990 — During the annual hajj in Saudi Arabia, 1,426 Muslim pilgrims, mainly from Asia, die in and around a long pedestrian tunnel leading from Mecca to Mina.

Oct. 16, 1996 — Eighty-four people die and 147 are injured as panicked fans are crushed and smothered before a World Cup qualifier between Guatemala and Costa Rica in Guatemala City.

April 11, 2001 — At least 43 people are crushed to death during a soccer match at Ellis Park in Johannesburg, South Africa.

May 9, 2001 — More than 120 people are killed when police fire tear gas into the rowdy crowd in a stadium in the Ghanaian capital Accra, leading to panic.

Feb. 20, 2003 — Stage pyrotechnics during a Great White concert at the Station nightclub in Warwick, Rhode Island, spark a fire that kills 100 people and injures more than 200 others.

Aug. 31, 2005 — At least 640 Shiite Muslim pilgrims in Baghdad are killed when a railing on a bridge collapses during a religious procession, sending scores into the Tigris River.

Feb. 4, 2006 — Seventy-eight people are killed in a panicked crush that happened at PhilSports Arena stampede in Manila, Philippines, as they were waiting for a TV variety show audition.

July 24, 2010 — Twenty-one people die and more than 650 are injured in a crush in a packed tunnel that was the sole access point to the Love Parade music festival in Duisburg, Germany.

Nov. 22, 2010 — More than 340 people are killed and hundreds of others are injured during a panicked crush at a festival in the Cambodian capital, Phnom Penh.

April 30, 2021 — Forty-five people are killed and dozens more are wounded in a panicked crush at the annual Mount Meron pilgrimage in Israel.

The 9 Hottest Couples on the ACM Awards Red Carpet

Analysis-Will gasoline prices drop in 2022? It depends on OPEC and U.S. shale