There’s a sick feeling that Edgars Creek Secondary College principal Jo Camozzato gets when she makes a certain call to the head of another school these days.

It comes from knowing that, at a time when so many schools are operating with a shortage of teachers, she is about to take one of theirs. 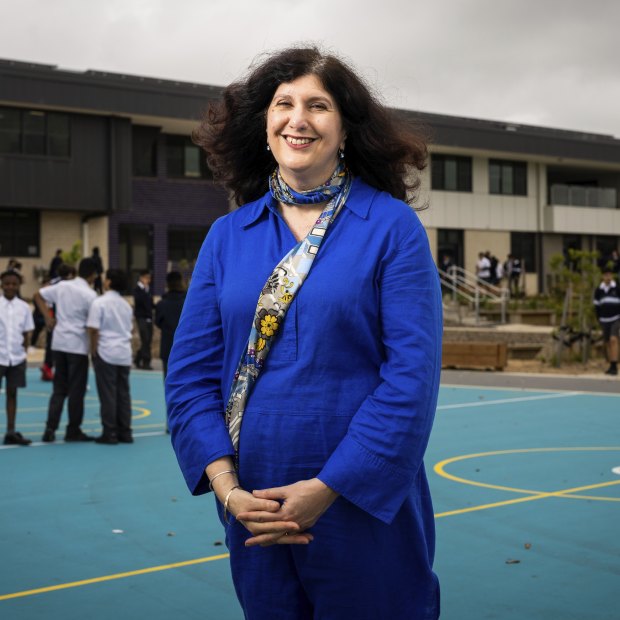 “I’m getting to the point where I nearly apologise to some of my colleagues, if I’m ringing them for a referee check and I know that I’m going to offer [a teacher] a job, especially if it’s a country school,” she says.

It’s Wednesday morning, 8am, and we are inside Camozzato’s office, minutes before 1000 students will begin filtering through the front gates of her school.

Edgars Creek Secondary College stands right on Melbourne’s northern fringe in Wollert, where low-rise housing estates butt up against grassy paddocks that are next in line to be claimed by the expanding urban frontier.

There’s a sign pinned to the office wall, among the jumble of student artworks and departmental notices, warning students to look out for snakes.

It is among the fastest growing schools in the state. Five years after opening with just 85 students, it has 1001 enrolled this year, will take in 250 extra students next year, and is forecast to have 1500 in 2024.

Hundreds of extra students means dozens more teachers must be hired, and that is the school’s urgent problem. It can’t find them. 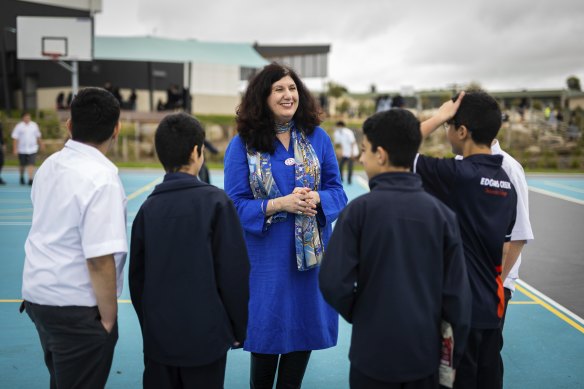 Plans for term 1, 2023 are well advanced. Extra chairs, lockers and even vape detectors are on order, but there are six of 25 new teaching roles the school hasn’t yet filled, mostly in maths and science. Some have been advertised since May.

“Most people who’d hear that I’ve hired 19 teachers would say that’s pretty good, but I actually need more than that,” Camozzato says.

She scrolls through the current list of applicants for each role on her computer. It’s an almost blank screen.

Recruiting new teachers wasn’t this hard, even three years ago.

“Pre-COVID, we would have 20 to 40, sometimes 50 applicants for a job. Currently we get zero to three … it’s really quite devastating.”

The pandemic played havoc with Victorian schools, forcing them in and out of lockdown for two years. They emerged in 2022 only to be mugged by a staffing crisis that threatens to be just as disruptive.

The issue has forced Edgars Creek to make difficult decisions this year, such as cancelling a free year 9 camp.

The decision was “gut-wrenchingly disappointing”, particularly for a group of students who had missed two years of outdoor experiences in the pandemic, says assistant principal Glen Cowan.

“It was organised, paid for, and about two weeks prior it was just obvious we weren’t going to be able to staff it,” he says.

A full-sized, competition-grade synthetic turf oval stretches across Edgars Creek’s southern flank. Certified by the AFL and Cricket Australia, and shared with community clubs, the oval is one of the school’s proudest calling cards.

The soccer pitch is more modest, but come lunchtime it draws far more students, which is just as well.

There have been days this year when the school has had to close off the oval at recess and lunch, due to having too few staff to cover yard duty.

“You cover classes first, you cover the things that you must cover, and then you are making choices,” Cowan says.

Fewer school-leavers are enrolling in teaching courses, more of those who do are dropping out before completion, and 30 to 50 per cent of those who graduate are leaving the profession within five years.

“This is a problem 10 years in the making, and it is going to take time to fix,” Clare told an audience of hundreds of school leaders at the Australian Primary Principals’ Association on Wednesday night.

“That means this needs to be a permanent fixture on education ministers’ meetings for a while to come … If we don’t, we are not going to build and keep the teaching workforce we need.”

The government’s $328 million draft plan includes funding for 4000 new teacher training places in universities, for 5000 scholarships for high-achieving students, and to try to lure 2260 mid-career professionals from other fields into teaching. There is also money for a promotional campaign “to raise the status and value the role of teachers”. 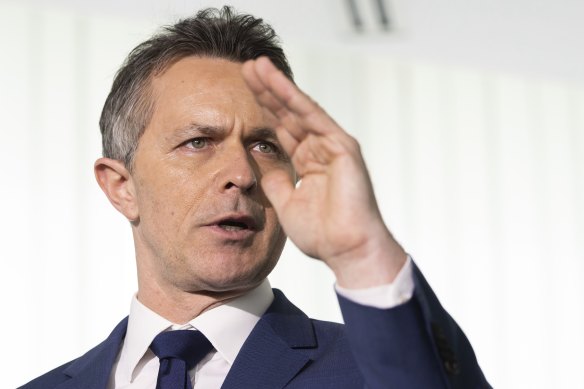 Some suggested innovations in the draft plan, such as employing career-changers and putting pre-service teachers to work in classrooms as part of their studies, are already happening at Edgars Creek.

The school’s teaching staff is overwhelmingly young and in the early phase of their career, but guided by a senior core of experienced teachers acting as mentors.

“Most of them are pretty young here,” Camozzato says. “We’re fortunate we do have some strong, experienced teachers who happen to live close by. They’ve been a real asset for us.”

It’s recess, and a chill wind, laced with raindrops, is whipping across the schoolgrounds.

Eliza Rodriguez is on yard duty, and has positioned herself between the soccer pitch and the basketball courts, both of which are alive with playing students. 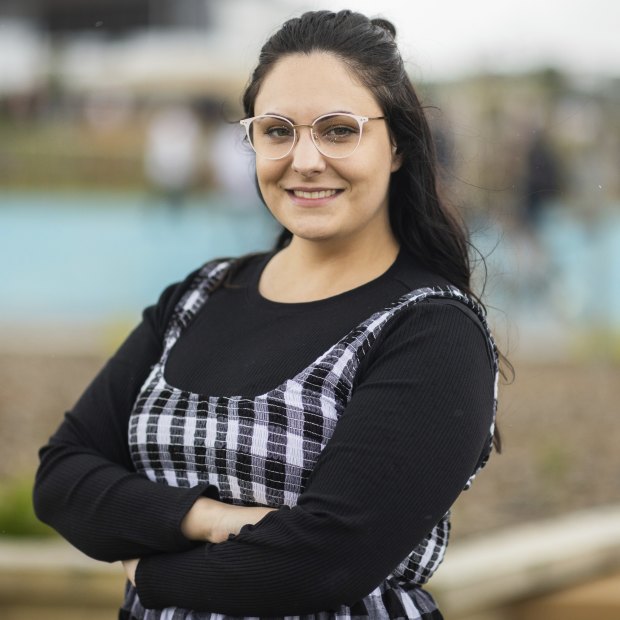 Edgars Creek has lost a few teachers to inner-city schools this year, but Rodriguez has gone against the tide.

She recently moved from Heidelberg to outer suburban Mernda to be closer to the college.

“After I started teaching here I decided to build a house nearby. It makes me look desperately committed,” she says.

“I know there’s jobs out there, but I always look at the environment within. I’ve never felt more supported than I was here.”

Rodriguez was hired to teach English and drama, but has also taken on visual arts classes among the younger year levels.

“I suppose it is challenging times,” she says of the teacher shortage, “but I kind of see it as an opportunity for myself.”

After recess, she takes a year 7 ceramics class. The students are each given a drawing of an ornate jug and set to work to try to make their own version out of clay.

Rachael Salter, a senior teacher at the school, is there to observe. A key part of her job is to work with graduate teachers, help build their teaching expertise and their interpersonal skills with parents and students.

“I might model a conversation on the phone with a parent about routines not being followed, expectations not being met that sort of thing,” she says.

We are walking through a corridor. Four year 9 students have snuck away from their maths class, which is being taken by a casual relief teacher.

With a gentle rebuke, Salter directs them back to class. A boy meows at her, defiantly.

Student behaviour has become more challenging since COVID, she says. Part of it comes down to the fact that so many classes are being taken by casual relief teachers. Students are more likely to push boundaries.

“My role is supporting staff who are new to the school,” Weare says. “The hope is that they feel supported, that they’re able to do their job really effectively, and then they choose to stay, which would be the ultimate goal.” 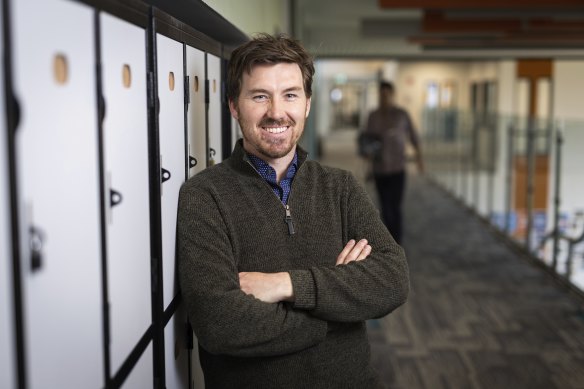 Mark Stacey switched from environmental science to teaching. Part-way through his degree at the University of Melbourne, he is paid to teach four days a week at Edgars Creek Secondary College as part of his studies.Credit:Paul Jeffers

Maths teacher Mark Stacey is one of several teachers who is new to the school. He is still a student himself. After a 15-year career in environmental science, he has enrolled in a two-year teaching master’s degree at Melbourne University, specifically tailored for career-changers. His studies include being paid to teach at Edgars Creek four days a week.

It’s a “try before you buy sort of option”, he says, and he admits that student behaviour has been “an eye-opener”.

“I’m getting experience now, and I’m getting a pretty good sense of whether it’s for me,” he says.

If he does settle on teaching, he figures he’ll be in demand.

“Having such a teacher shortage means I know I’m pretty employable. Although you feel the pain [for schools], personally it gives me plenty of options.”

Queen Latifah: I’ve been asked to lose weight for roles, but I’m what people look like