Home » World News » Is the fate of Australia Day heading only in one direction? 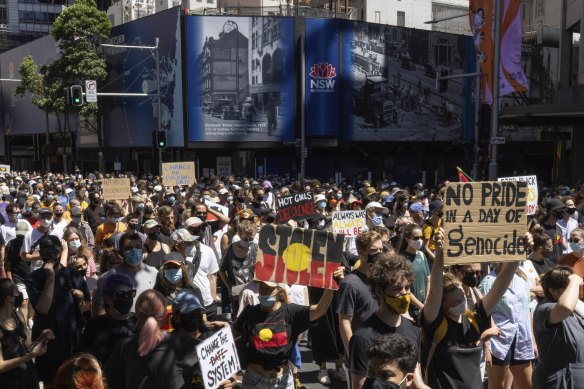 Through most of his life, Kieren Kearney celebrated Australia Day. In his early years, it was the barbecues with friends laced with notions of “mateship”. Later, it was Australia Day open-water swimming events with his kids.

In the past decade, that started to shift for the 46-year-old, and he is not alone. Recent polling consistently finds that roughly two-thirds of Australian adults believe we should continue to have Australia Day on January 26. Twenty years ago, that number was closer to 80 per cent.

“There’s nothing wrong with having some national pride, but not on a date that has so much trauma,” says Kearney, who has Irish ancestry. 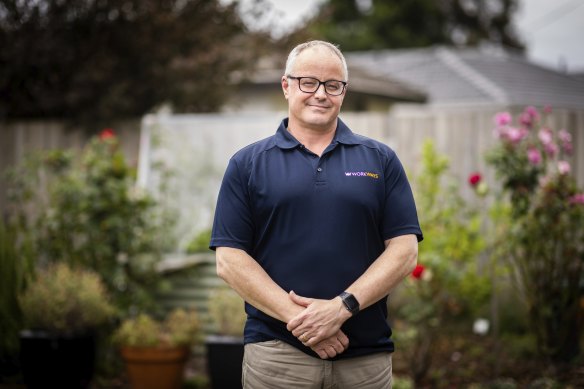 Workways chief executive Kieren Kearney hasn’t gone to an Australia Day party in years, and now offers his staff the choice to work on the day.Credit:Paul Jeffers

After conversations with his children, now aged 16 and 20, the family decided to stop going to Australia Day-branded events and ocean swims about five years ago.

As Invasion Day and Survival Day rallies pick up steam each year on January 26 – the date Britain’s First Fleet sailed into Sydney Cove in 1788, marking a formal beginning of Australia’s colonisation and displacement of First Nations people – the Change the Date movement has grown louder.

Companies and governments are giving staff the option of working on January 26 as more people seek to ignore the public holiday that was designated 29 years ago.

Kearney, from Dingley Village in Melbourne’s south-east, is chief executive of employment services non-profit Workways, which last month joined the throng of businesses giving employees the option to work.

For many, Australia Day represents a positive, proud day for all Australians to celebrate the Great Southern Land and the beginning of modern Australia. 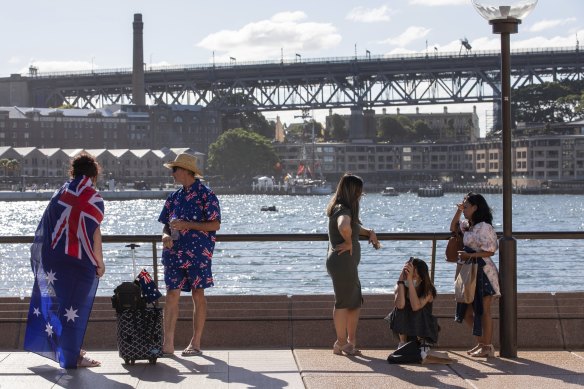 A man and woman dressed head to toe in Australian flags at the Australia Day festivities at Circular Quay in 2022.Credit:Cole Bennetts

For others, it’s an uncomfortable or even painful day. In many circles, being seen at an Australia Day party is now a faux pas amid a flurry of #changethedate social media posts.

And research indicates the nation is approaching a tipping point as the population ages.

Roy Morgan’s 2022 survey shows Australians aged under 35 are more likely to favour calling January 26 “Invasion Day”. Of those aged 18 to 25, two-thirds would agree. (Women, Greens supporters and capital city residents are also more likely to be in this camp.)

Colonial countries across the West are wrestling with a similar question. In the US, there is growing pressure to rename the federal public holiday Columbus Day – which nods to Christopher Columbus’ 15th-century exploration of the Americas – as Indigenous Peoples’ Day.

New Zealand’s national day, Waitangi Day – marking the anniversary of the 1840 signing of the Treaty of Waitangi – draws large protests over treaty injustices.

While 15 years ago Australia’s Invasion Day rallies pulled crowds in their hundreds, now thousands gather in Sydney, Melbourne and Brisbane.

‘When I was younger I felt like a social outcast because I didn’t go to [Australia Day] events.’

Roy Morgan poll manager Julian McCrann says 2022’s survey of almost 1400 adults found the older a respondent was, the more likely they were to be in favour of January 26 being known as Australia Day.

McCrann expects that as young people age, overall support for Australia Day will tumble into the minority over the next decade.

He uses the same-sex marriage debate as an example: “It took about 15-20 years from when it was first legalised in the Netherlands until it was legalised in 2017 here,” he says, adding: “Sometimes these things take a bit of time to permeate.”

It puts the nation at a strange juncture, where a company such as Woolworths is giving staff the choice to work on January 26, while still selling Australian flag-branded beach balls and hats for the holiday.

“Selling Australia Day merchandise is market-driven, in the same way we sell Easter eggs and Christmas decorations in the knowledge we also have communities that don’t celebrate those days,” says Queensland University of Technology professor of retail and marketing Gary Mortimer.

University of Queensland psychology lecturer Dr Hema Preya Selvanathan published research last year after surveying about 400 people on January 26 in 2020, half attending an Invasion Day rally and half celebrating the public holiday at Brisbane’s South Bank park. She says the latter group felt Indigenous Australian culture was already strongly preserved, suggesting the need for improving education about past atrocities and their ongoing impact. 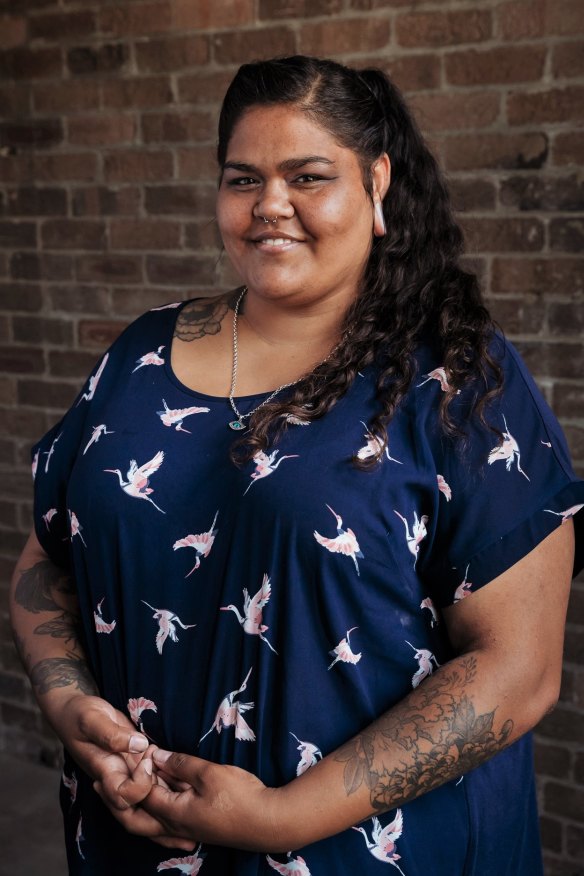 She is heartened that more Australians want to show respect for First Nations people by joining protests or choosing to work, particularly when they also donate their day’s wages to Indigenous causes.

“I feel supported by the thousands and thousands of people standing beside me,” she says. “When I was younger I felt like a social outcast because I didn’t go to [Australia Day] events.

Johnson, a visual artist and social media influencer, last year posted a video calling on people to decline invitations to Australia Day parties, using the phrase “no pride in genocide”.

She is noticing a growing sense of malaise, with people feeling guilty and not being sure how to spend the day.

“Someone even asked me, ‘Can I take my dog to the park?’ and I explained the intention is more important,” she says. “I won’t demonise someone for having a barbecue, it just depends on whether you’re participating with that ideology of celebrating the nation and waving the flag.” 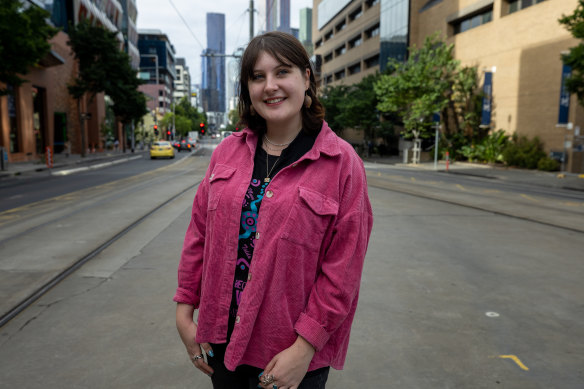 Wiradjuri and Bunurong woman Brittney Henderson, 22, has to stay away from her phone every year on Australia Day because the online commentary is so distressing, but she is encouraged as Invasion Day rallies swell.

“People are realising it’s not appropriate,” says Henderson, the Indigenous office bearer at the University of Melbourne’s student union, who adds that deliberately snubbing Australia Day events can be a valuable way to take a stand.

“Everyone shows up differently. Protesting is not accessible for everyone,” she says.

Olivia Webster, of Kogarah in Sydney’s south, has worked January 26 the past three years because her employer, investment manager Australian Ethical, lets staff take a different day off.

Webster used to go to pool parties when she didn’t understand how hurtful January 26 is for First Nations people, but this changed in her university days.

“It was nice to have the option to not even treat it as a public holiday but as any other day,” Webster says. 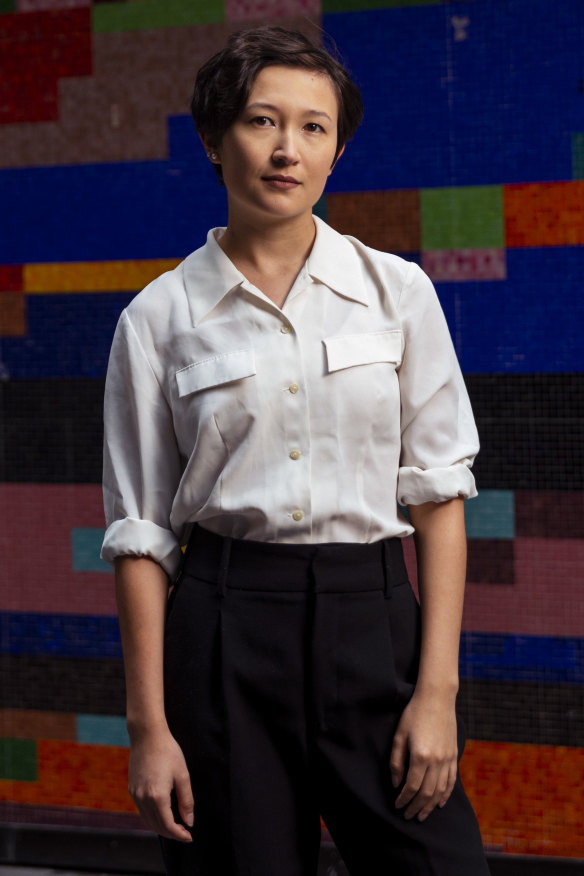 Australian Ethical employee Olivia Webster has opted to work on January 26 the past three years.Credit:Dominic Lorrimer

Ernst and Young’s Kristian Nielsen, 26, will be at the office on January 26, and he will take time out during his work day to attend Melbourne’s Invasion Day protest along with colleagues and friends.

Nielsen points to radio station Triple J moving the date of its Hottest 100 countdown in 2018 as having a major influence on young people.

“When it changed it echoed through my circles. It was quite powerful.”

Changing the date of our national holiday to a more unifying day and rebranding January 26 “Survival Day” or “Invasion Day” is just one issue among many that First Nations people are fighting for, key among them being recognition of Indigenous Australian sovereignty and a signed treaty. The Voice to parliament referendum, while more contentious, is also important to many Indigenous Australians.

Dr Selvanathan credits the persistent campaigning of First Nations people for the gradual but strong change in attitudes in the past decade regarding Australia Day, which she only expects to intensify over coming years.

“[Invasion Day] protests function as a sort of persuasion tactic to raise awareness that this day is not OK,” she says.

Still, for all the growing pushback, the annual Australian of the Year awards of January 26 remain coveted and official Australia Day events draw large and enthusiastic crowds.

This Thursday, government houses will once more throw open their gates; in Melbourne, Federation Square will host family activities and an aerial display is scheduled; and in Sydney, the program includes First Nations events as well as an Australia Day harbour parade and, later, fireworks. 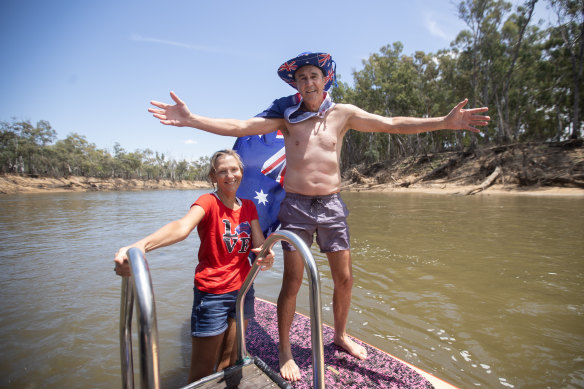 Mark Jacobsen will organise an Australia day event on the Murray River.Credit:Simon Schluter

Moama-based Mark Jacobsen, 60, is helping to organise the Murray River float that holidaymakers at High View Waters resort have held to mark Australia Day for the past 10 years.

Dozens of people will drift four kilometres along the river with inflatable thong-shaped lilos, Eskies and a four-metre Australian flag. They’ll then play lawn cricket and have a barbecue.

Jacobsen, who owns one of the 60 cabins on the site, says the event, and the public holiday in general, is a special tradition that brings people together.

“Australia Day is important to us … [It’s] all about celebrating what Australia has given its people,” he says. “We’re proud to be Australians and want to demonstrate that. If anything we wear ‘brand Australia’ greater on that day.

“We don’t worry about people’s opinions, we just want to enjoy the day for what it is and other beliefs can do what they want.”

Chris Quirke, 35, is also organising an Australia Day barbecue as the community co-ordinator of Victorian motoring club Motafrenz, which was set up for car-loving LGBTQI+ people 30 years ago.

The poolside event in Pakenham, in Melbourne’s outer south-east, will have drinks, snags and lamingtons for about 50 people.

Quirke says the club has always held a celebration on January 26.

“We accept that Australia Day is the national public holiday set down by the federal government and until that does change … we’ll toe the line,” he says. “I think it’s important to have a date that recognises all Australians, those that came from a convict background and First Nations people. How that’s done is beyond me.”