JOE Biden proved romance is still very much alive as he paused to pick a dandelion from the White House lawn for wife Jill as they headed to board Marine One.

The First Lady, donning a stunning blue Oscar de la Renta dress with yellow fruits on, gazed on gleefully as her husband bent down to pull the flower from the ground before handing it to her ahead of departing for Georgia. 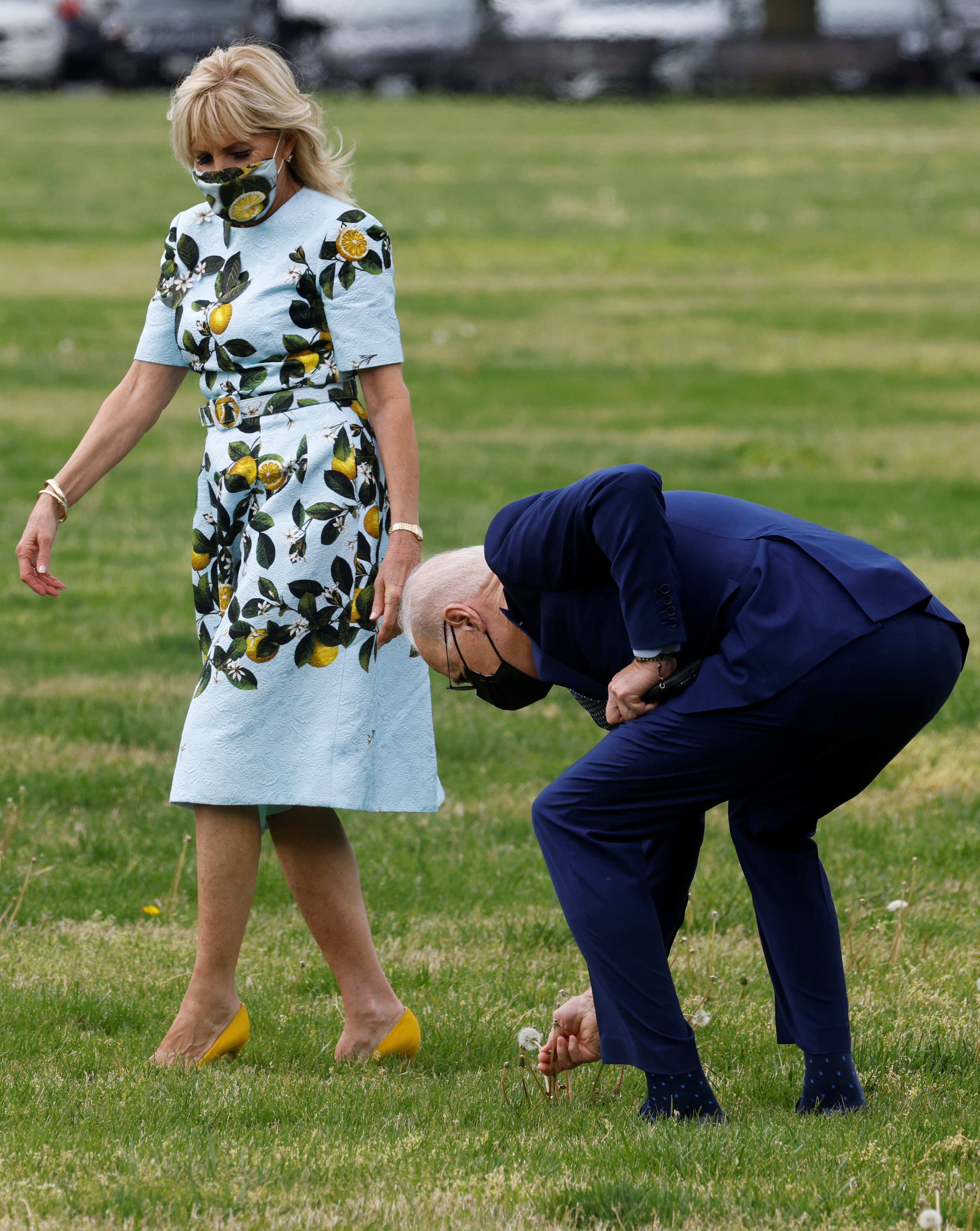 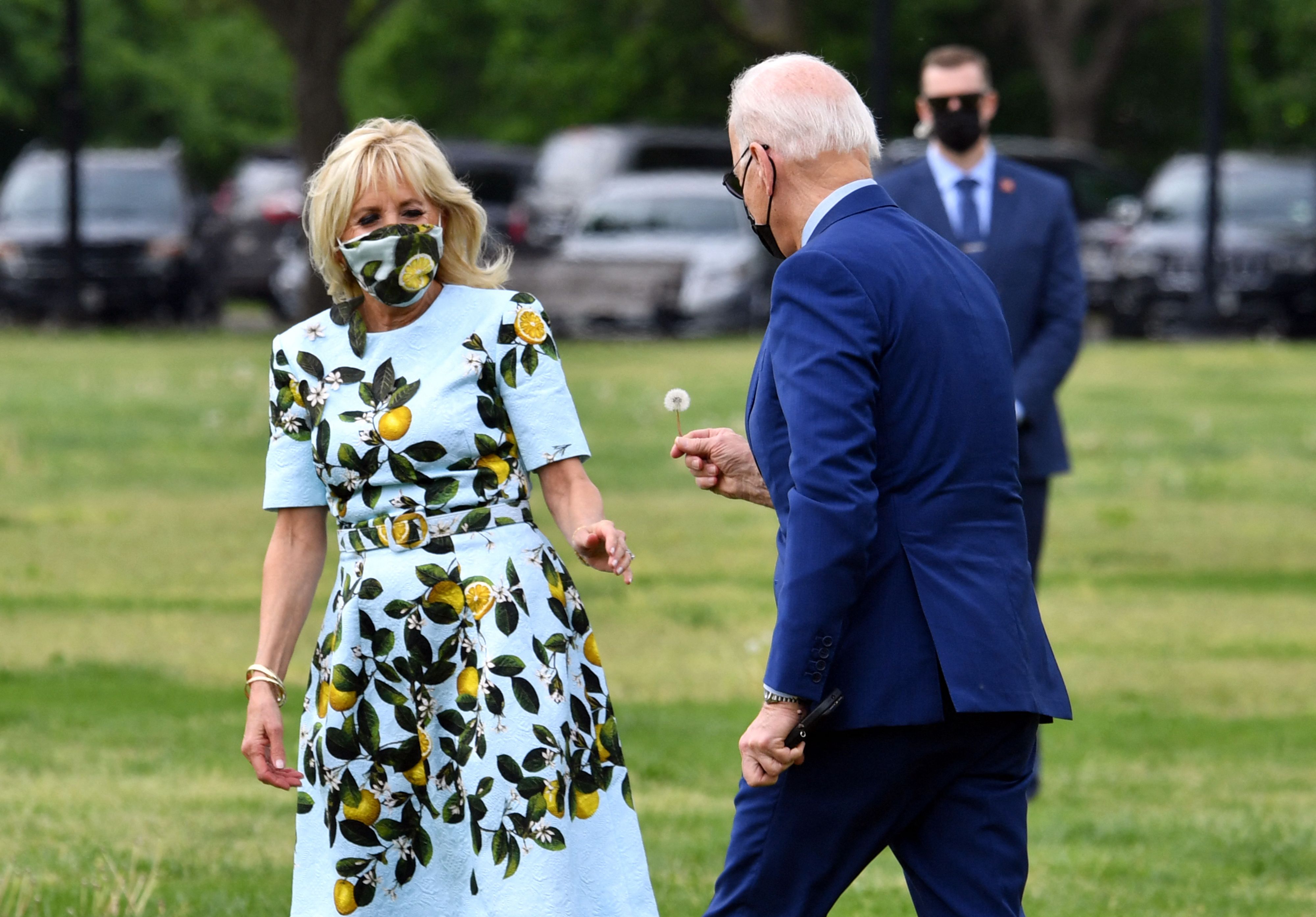 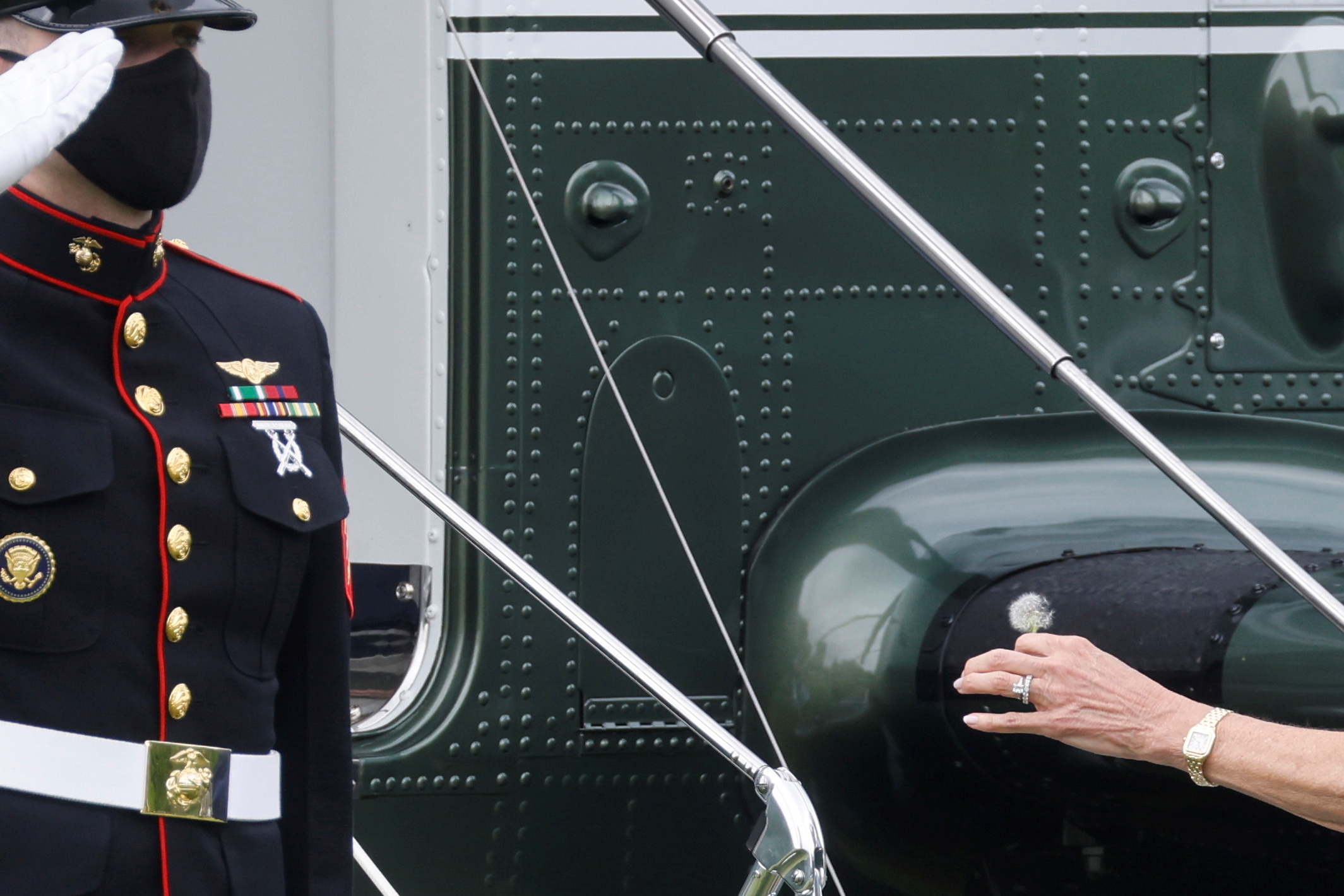 The couple then climbed aboard the Marine One chopper on the ellipse of the White House – with Jill still clutching the dandelion.

During Biden's visit to Georgia with his wife to mark his 100th day in office, the pair will pay a visit to former US president Jimmy Carter, 96, and his 93-year-old wife Rosalynn in Plains.

They were unable to attend Biden's inauguration on January 20 due to coronavirus restrictions.

Biden will also host a drive-in car rally at the Infinite Energy Center in Duluth before flying back to Washington DC. 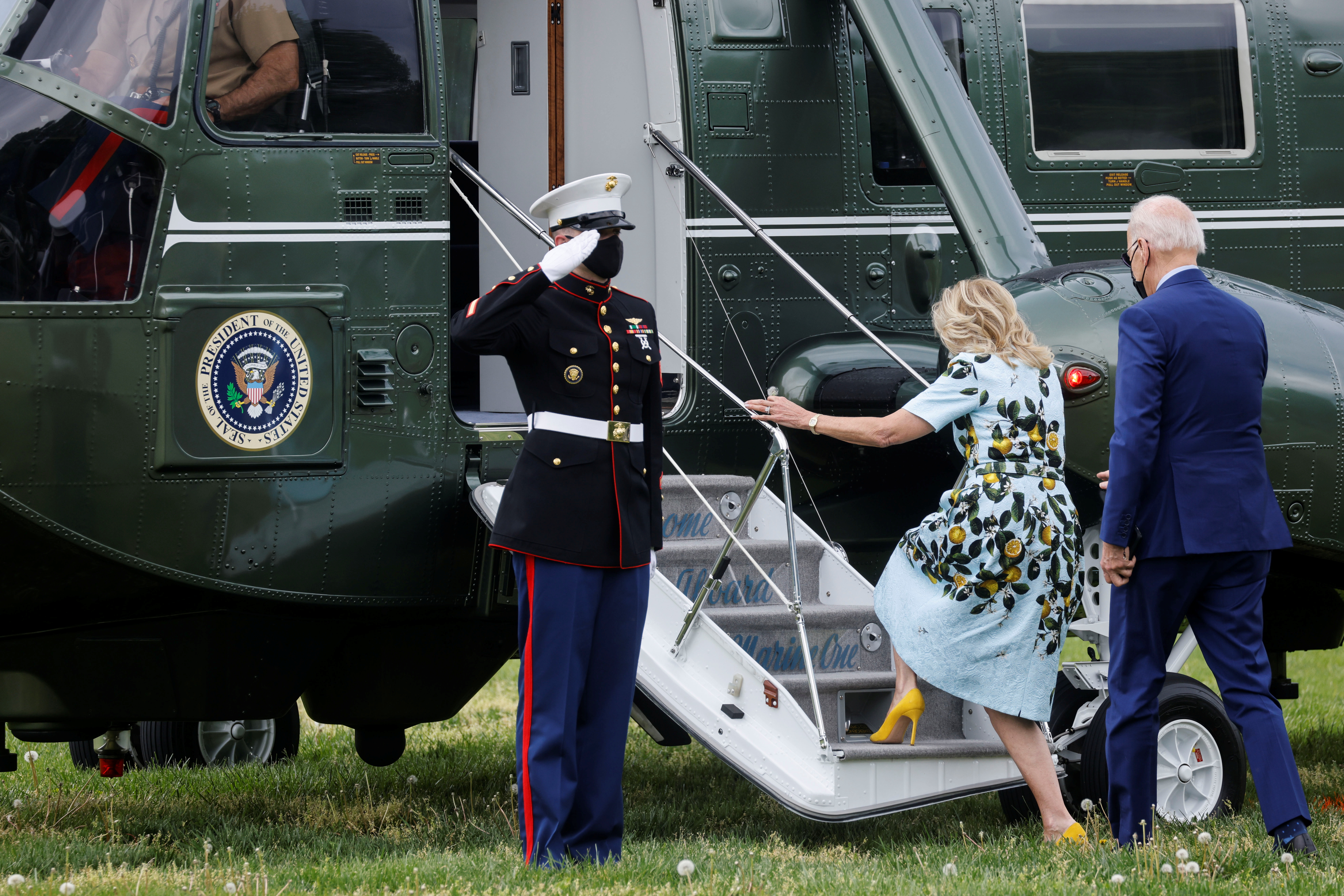 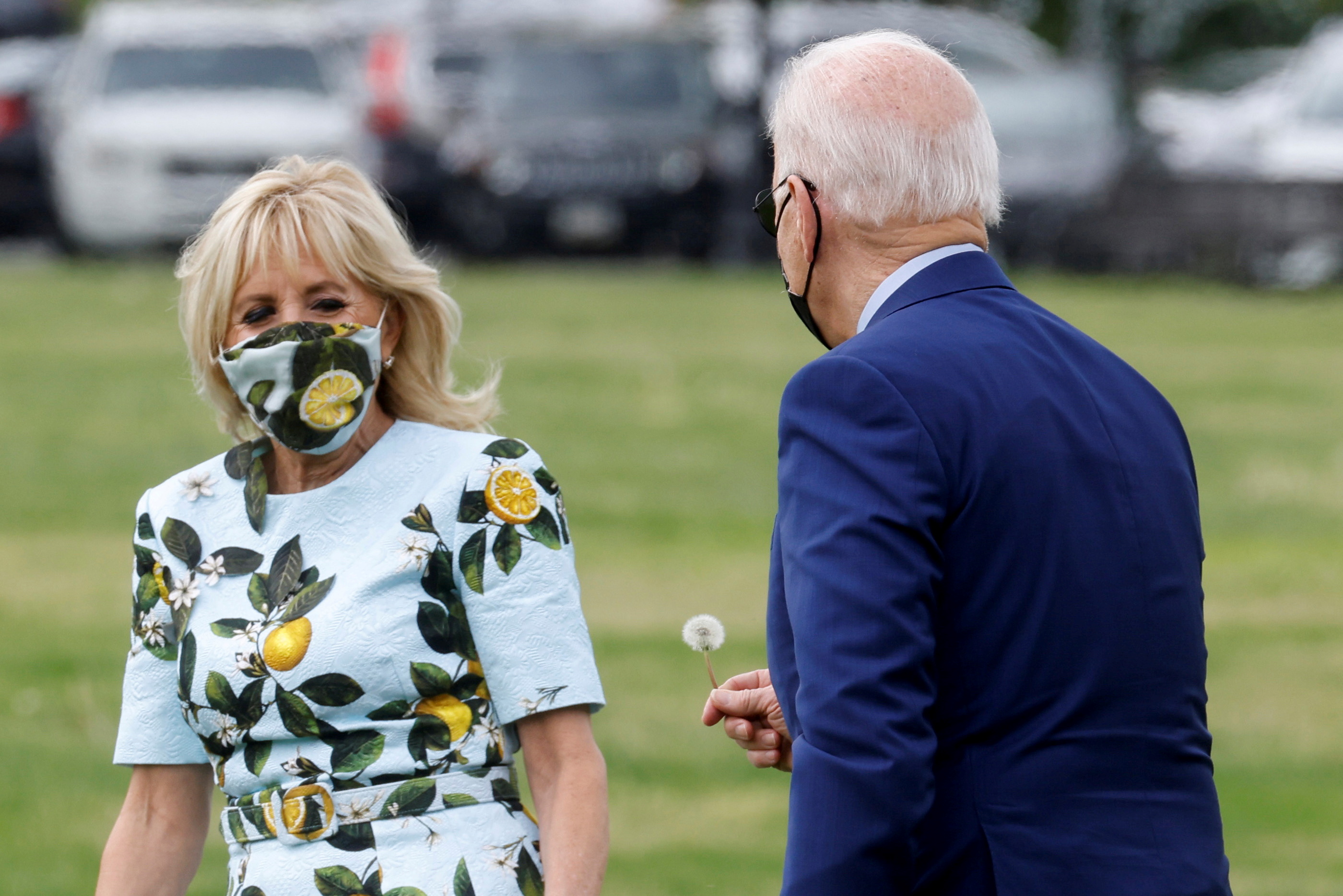 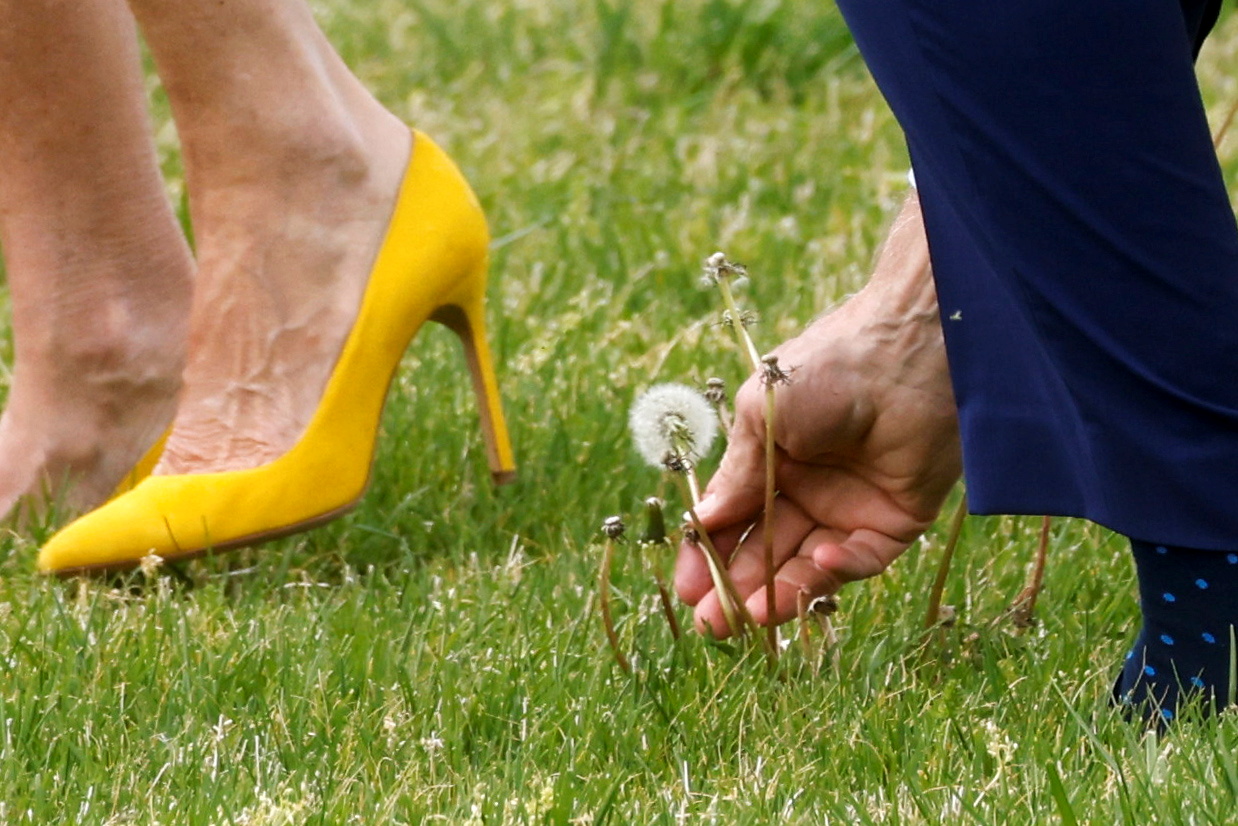 It follows the President's first address to the joint session of Congress last night, where he discussed his $2trillion infrastructure plan as well as the country's latest vaccination efforts.

Biden also spoke about the American Families Plan. He signed the plan into law in March which "continues to provide immediate relief to American families and communities."

It is described as an "investment in our kids, our families and our economic future."

But it's not just the president who treated his spouse to a romantic gesture.

During Biden's address to Congress yesterday, Kamala Harris' husband Douglas Emhoff was caught on camera waving and blowing kisses at his wife.

The Second Gentleman of the United States has been dubbed "the perfect man" after he was spotted sweetly motioning at the Vice President as she and House Speaker Nancy Pelosi  stood behind Biden during his address.

An adorable clip shows him waving, blowing at least 10 kisses to Harris and tapping his heart as he watched on as Biden delivered his speech to the joint session of Congress yesterday, on the eve of his 100th day in office.

It was shared on Twitter by social media director Sophie Vershbow, who joked in the caption: "The perfect man doesn’t exi—".

Who will walk behind Prince Philip's coffin?

Ex-football player accused of pulling a ‘Jussie Smollett’ in Georgia