The King was today pictured attending a Sunday morning service at Sandringham following days of revelations in his son’s autobiography Spare.

His Majesty was spotted being greeted by well-wishers after a tumultuous few days which have tested the Royal family.

Wearing a brown overcoat, the King looked relaxed as he was escorted to the service at his Royal estate in Norfolk.

Prince Harry has been written out of his father’s Coronation script, it was claimed yesterday, as royal insiders said Prince William is ‘burning with anger’ amid the bombshell revelations in the Duke of Sussex’s memoirs. 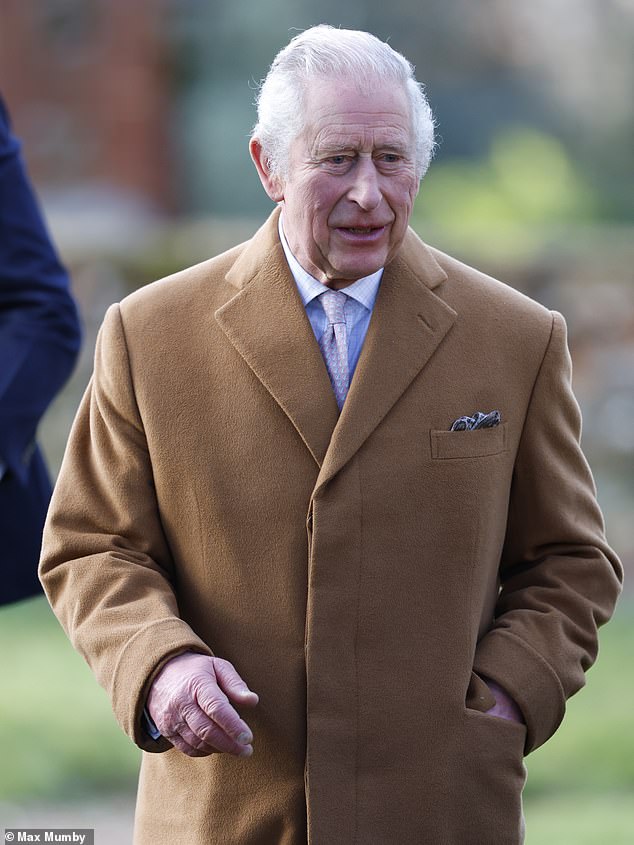 The King was today pictured attending a Sunday morning service at Sandringham in Norfolk following days of revelations in his son’s memoir Spare. 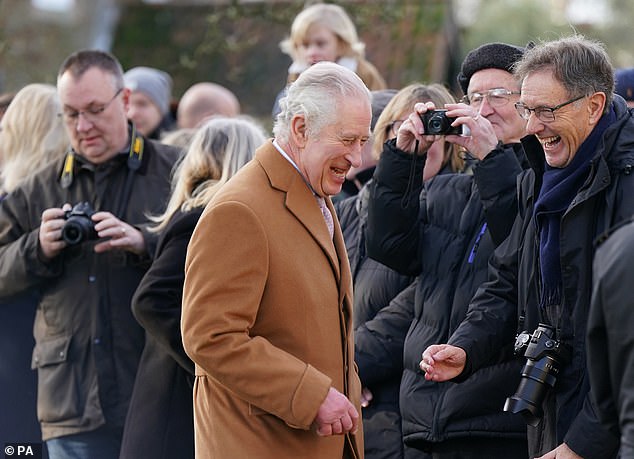 In his memoir, Prince Harry claims his brother ‘lunged’ at him and ‘grabbed his shirt twice’ in front of their father during a row over his interview with Oprah Winfrey.

Harry, in his bombshell memoir, details how Prince William was ‘shouting’ and ‘really steaming’ when he grasped at him during the dispute in front of then-Prince Charles following the funeral of their grandfather, Prince Philip.

William is said to have then used a secret code phrase about Princess Diana and embraced Harry in a hug, telling him: ‘I love you’ and ‘I just want you to be happy.’

Details of the row emerged just days after it was revealed that Harry claims in his book that a ‘piping hot’ William once injured him by pushing him onto a dog bowl on the kitchen floor of his cottage home in the grounds of Kensington Palace in 2019. 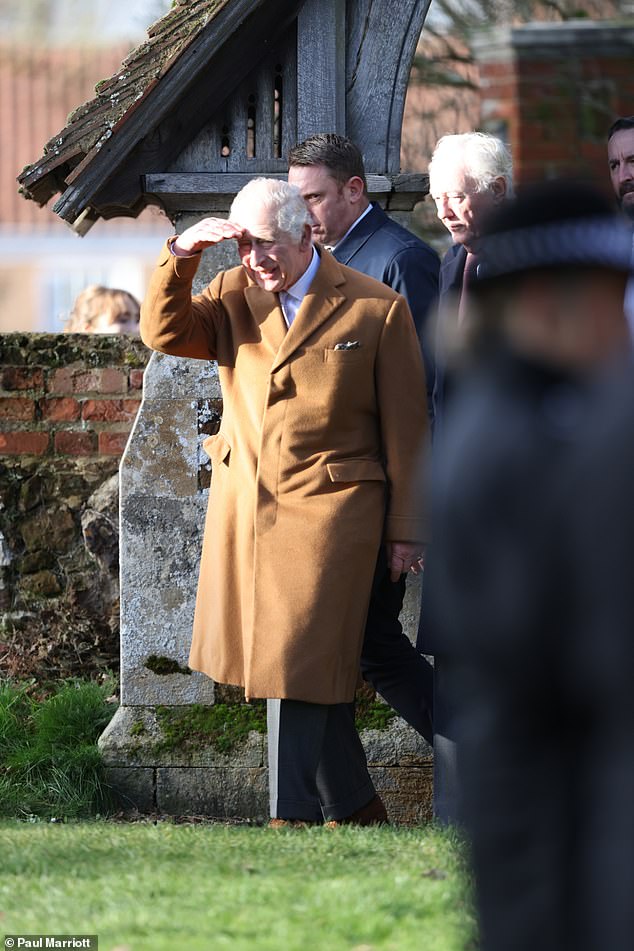 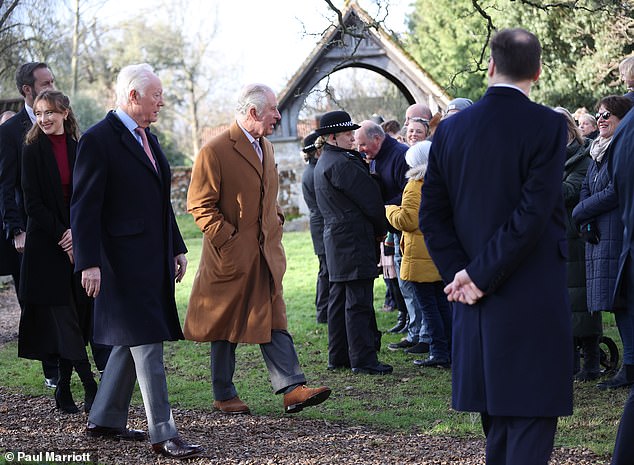 Wearing a brown overcoat, the King looked relaxed as he was escorted to the service at his Royal estate in Norfolk 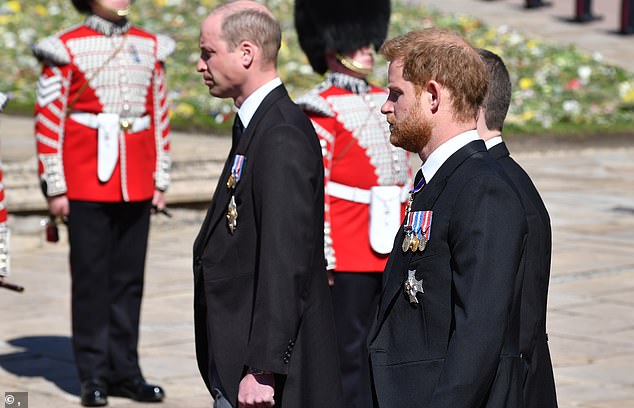 Prince Harry claims his brother ‘lunged’ at him and ‘grabbed his shirt twice’ after Prince Philip’s funeral – in front of their father – during a row over his interview with Oprah Winfrey. William and Harry are pictured at the funeral in April 2021 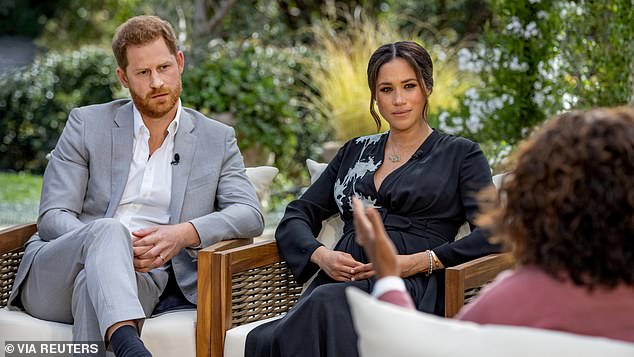 The dispute broke out as Harry, William and Charles were reportedly discussing the interview he and Meghan Markle gave to Oprah the month before. The Sussexes are picture during the interview

In his new autobiography ‘Spare’, the Duke of Sussex, 38, writes how his brother got heated during a half-hour walk near Frogmore Cottage following Philip’s funeral on April 17, 2021.

Harry, William and Charles were reportedly discussing the interview he and Meghan Markle gave to Oprah the month before.

Harry claims was trying to address bullying allegations made against Meghan, but his father and brother ‘weren’t listening.’

The California-based royal went on to allege that William was ‘really steaming’ and grasped at him as he tried to walk away.

‘I waved a hand, disgusted, but he lunged, grabbed my shirt. “Listen to me, Harold,”‘ Harry wrote in his book, according to The Sun.

‘I pulled away, refused to meet his gaze. He forced me to look into his eyes. “Listen to me, Harold, listen! I love you, Harold! I want you to be happy.”‘

Harry claims he replied: ‘I love you too…but your stubbornness is extraordinary!’ 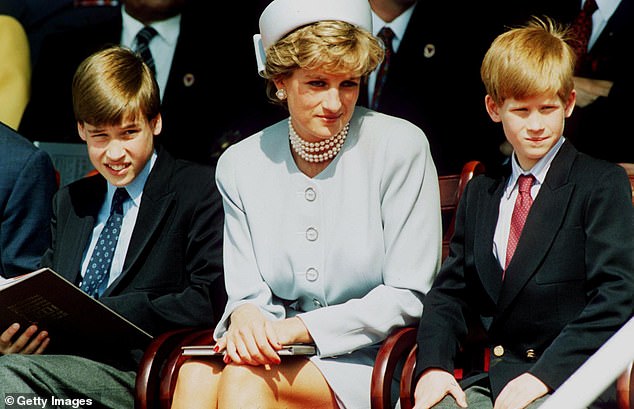 William is said to have then used a secret code phrase about Princess Diana and embraced Harry in a hug, telling him: ‘I love you’ and ‘I just want you to be happy.’ Harry and William are pictured with Princess Diana in 1995 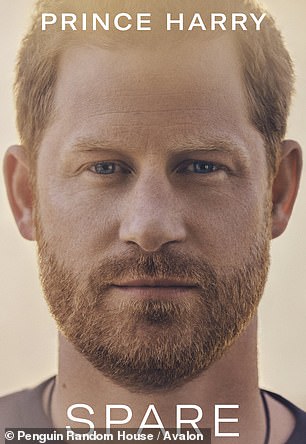 Prince Harry’s highly anticipated memoir will be released in the UK on January 10, but copies have already leaked and the book was accidentally published early in Spain

The Duke reportedly tried to pull away, but William allegedly ‘grabbed him again’ and ‘twisted him’ so the pair could maintain eye contact.

William then evoked the brother’s so-called ‘secret code’ and swore on Princess Diana’s life that his intentions were genuine, Harry penned.

He writes that William said: ‘Harold, you must listen to me! I just want you to be happy, Harold. I swear I swear on Mummy’s life.’

‘He’d used the secret code, the universal password. Ever since we were boys those three words were to be used only in times of extreme crisis.’

The Duke claimed his brother ‘wasn’t quite ready to accept defeat’ and claimed to be ‘properly sick and ill’ over the tensions between the pair.

William allegedly reiterated: ‘I swear to you now on Mummy’s life that I just want you to be happy’.

Harry claims his ‘voice broke’ and he ‘softly’ told William: ‘I really don’t think you do.’

The elder brother then allegedly hugged Harry and said: ‘I love you’.

MailOnline has approached representatives for William and Harry for comment. 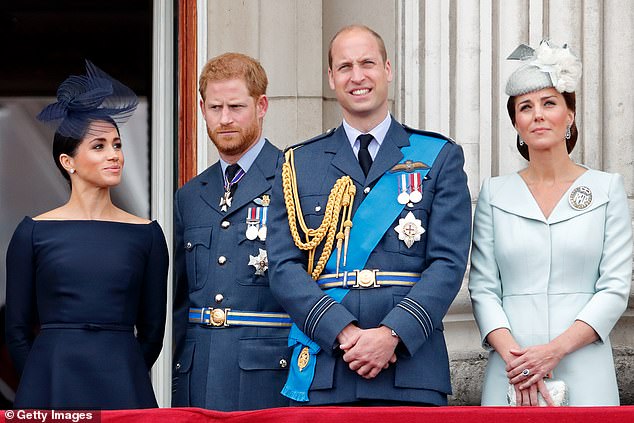 In an extraordinary excerpt from his upcoming autobiography Spare, Harry recalls what he describes as a physical attack by his sibling, now the Prince of Wales, which he claims left him with visible injuries

Britain’s Prince Harry, Duke of Sussex (L) and Britain’s Prince William, Duke of Cambridge attend the unveiling of a statue of their mother, Princess Diana at The Sunken Garden in Kensington Palace, London on July 1, 2021

Prince Harry was high on laughing gas and ate Nando’s chicken at the birth of his son Archie: Click here to read more 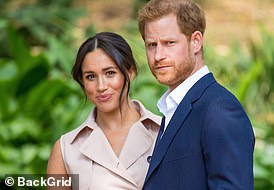 The latest allegation comes after just days after a leaked extract of the upcoming memoir revealed that Harry alleged William injured him by pushing him onto a dog bowl.

Harry alleged that he fought with his brother at Nottingham Cottage in early 2019 during a conversation about their relationship, Harry’s rows with the press and Meghan.

The Duke of Sussex claims that William then grabbed him by the collar, ripped his necklace then pushed him over in the kitchen, causing him to land on a dog bowl that shattered and injured his back.

Harry and Meghan lived in the London home – dubbed ‘Nott Cott’ – set within the grounds of Kensington Palace, from 2016 before they moved to Frogmore Cottage in the Windsor estate in April 2019.

In their explosive Netflix series Harry & Meghan, the couple described the home as ‘so small’, with clips from the documentary showing cobbled walkways and shrubs sprouting in the borders.

Harry said in an interview for the series: ‘The whole thing is on a slight lean, [with] really low ceilings. So I don’t know who was there before but they must have been very short.’

Meghan laughed, revealing Harry would ‘hit his head constantly because he is so tall’.

The Duchess of Sussex said: ‘It was a time in our lives that people probably couldn’t believe what was going on behind the scenes.’

Another snap with a homely feels shows Harry eating chicken and cuddling up with Meghan’s dog Guy on a cream sofa.

Oprah was among the guests who came to visit the Sussexes at the cottage.

Amy Schumer 'Wanted to Be Real' by Revealing Liposuction Surgery

Police confirm they killed Strasbourg shooter after a manhunt