Sir Keir Starmer squirmed today as he was confronted with his past pledge to ‘end outsourcing in the NHS’ – as the same time as he promoted his new plan to use private hospitals to tackle waiting lists.

The Labour leader claimed the NHS was ‘not just on its knees, it’s on its face’ as it suffers the ‘worst crisis’ in its history amid this winter’s pressures and the backlogs in care.

He said his party’s research showed around 230,000 patients could be moved off waiting lists each year if private care was used more effectively.

But Sir Keir insisted he was ‘not talking about privatising the NHS’ as he was confronted by a promise he made when standing for the Labour leadership in 2020.

Among 10 pledges Sir Keir made during his campaign to replace Jeremy Corbyn, the Labour leader vowed to ‘end outsourcing in our NHS, local government and justice system’.

Sir Keir has already angered Labour’s left-wing in recent months by moving away from his other pledges on public ownership, free movement, tuition fees and support for trade unions.

Amid widespread reports of shocking waiting times at A&E and for ambulances, Rishi Sunak has declined to say the NHS is in ‘crisis’ – although the PM has acknowledged there is ‘enormous pressure’ on hospitals this winter.

The NHS is set to be buffeted further this week with some ambulance staff planning to strike again on Wednesday, while nurses are also plotting another walkout on 18 and 19 January as part of their dispute over pay. 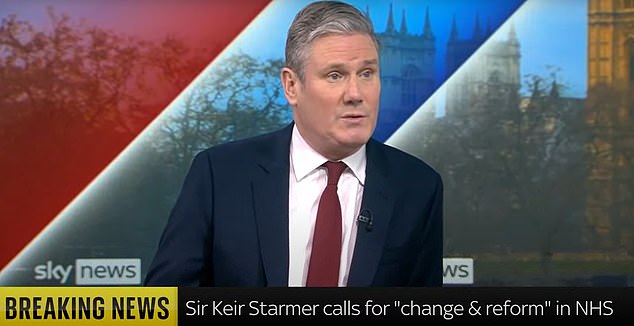 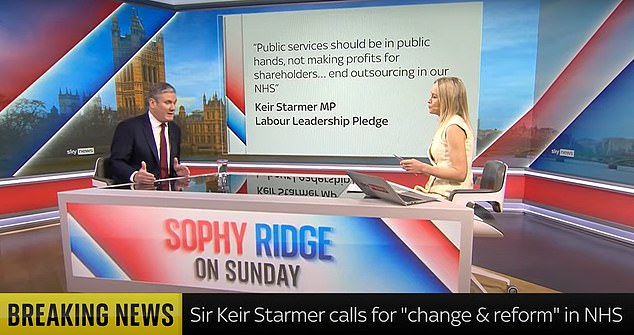 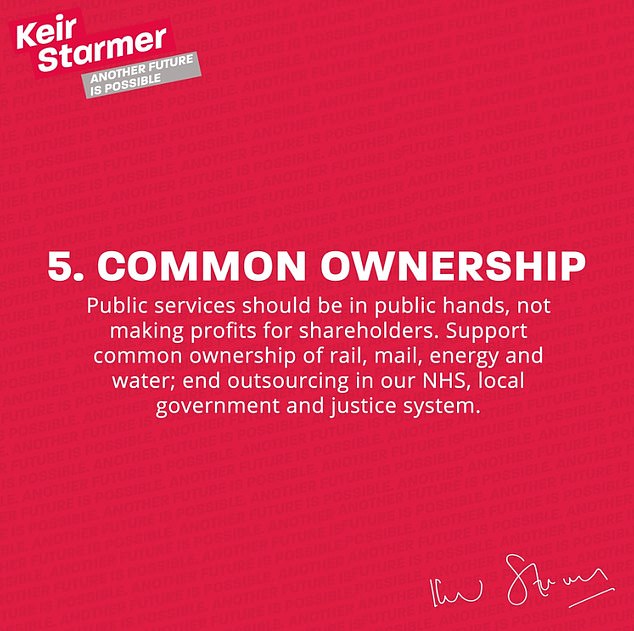 Among 10 pledges Sir Keir made during his successul bid to replace Jeremy Corbyn, the Labour leader vowed to ‘end outsourcing in our NHS, local government and justice system’

Setting out Labour’s demand for the Government to take up their proposals for tackling NHS waiting lists, Sir Keir told Sky News’ Sophy Ridge on Sunday show:  ‘One of the issues we’ve looked at is whether or not we are using the private sector effectively.

‘A number of people do go as NHS patients to the private sector. Our research shows that’s been underused and we could do more of it.

‘That would clear 230,000 people off the waiting lists every year.’

Sir Keir said Labour was asking ‘bold’ questions of the health service as part of a 10-year ‘change and reform’ agenda for the NHS, which the party will consult on in the coming months.

But he insisted he was not in support of NHS privatisation and stressed that ‘the NHS has always used elements from the private sector, GPs are an example of that’.

‘Free at the point of use is absolutely a governing principle… but we do need change and reform.

‘I want to look, for example, at primary care. Would it be possible to use local pharmacies more to do work on prescriptions etc.? Is there a route for self-referral?

‘What do we do about the partnerships with GPs? Which I don’;t think are necessarily as efficient as they should be.

‘We’re asking all the questions that a bold, incoming government should ask about change and reform.’

A spokesperson for Momentum, the left-wing Labour pressure group, accused Sir Keir of a ‘morally wrong and politically self-defeating’ reversal on his leadership pledge.

They also noted how Sir Keir’s own promotion of utilising private care came on the same day the PM repeatedly refused to reveal whether he was registered with a private GP practice.

‘On a day when Rishi Sunak is under fire for his relationship to private health care, it beggars belief that the Labour leadership is choosing to embrace the role of the private sector in the NHS,’ the spokesperson said.

‘Not only does this undermine the NHS’s universal public sector principle, but it doubles down on a key driving force for the crisis we are currently suffering – the damaging role of profit-making companies into public health.

‘For Keir Starmer to go back on his leadership pledge to end NHS outsourcing is morally wrong and politically self-defeating.’

Crown Princess Mary of Denmark at EliteForsk awards in Copenhagen

Announcing the Winners of the 2018 Billboard Music Awards!