London: A man who helped tackle a knife-wielding terrorist who killed two people near London Bridge said he intervened because it was "what any Londoner would do".

Thomas Gray, 24, was among a group of men who dragged the killer to the floor near Fishmongers' Hall on Friday, London time. 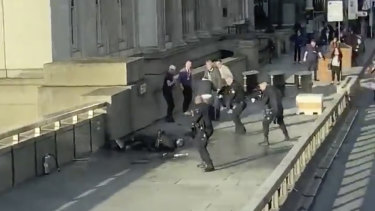 In this grab taken from video,, a man is surrounded by police after an incident on London Bridge.Credit:@HLOBlog

The tour firm manager said he stamped on the terrorist's wrist to try to make him release one of two large knives he was carrying.

"I was brought up on rugby and the rule is 'one in, all in'. I did what any Londoner would do and tried to put a stop to it,"  Gray told the PA news agency.

Gray said he had been driving northbound on London Bridge with his colleague Stevie, when they saw several people running towards the south of the bridge. 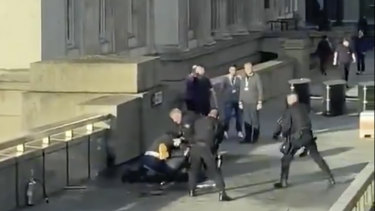 A man wearing a fake explosive vest stabbed several people before being tackled by members of the public and then shot dead by armed officers on London Bridge.Credit:@HLOBlog

He said they did not know what to do, so he turned the car off, and by the time he got to the attacker he had been "wrestled" to the floor by "five or six other blokes".

"He had two knives on him, one in each hand, and it looked like they were taped to his hands," Gray said.

"I stamped on his left wrist while someone else smacked his hand on the ground and kicked one of the knives away.

"I went to pick up the knife when I heard a cop say 'he has got a bomb'.

"I then got back and hid behind a school bus which was full of kids at the time."

Gray said he saw "two or three" shots fired by police hit the attacker, who then "hit the deck".

"I turned and ran and then heard a volley of shots from behind us."

Gray told ITV News the attacker was being chased by five men with a "fire extinguisher" before he was wrestled to the ground.

The attacker, who was wearing a fake suicide vest and has not been named, was killed by police on London Bridge in full view of horrified onlookers.

Are you not allowed to do anything!? Paul Rankin blasts James Martin youre losing it!

Spoilers: Rishi kicks Manpreet out as her lies are exposed in Emmerdale