Bangkok: A hoped-for boom in Chinese tourism in Asia over next week’s Lunar New Year holidays looks set to be more of a blip as most travellers opt to stay inside China if they go anywhere.

From the beaches of Bali to Hokkaido’s powdery ski slopes, the hordes of Chinese travellers often seen in pre-COVID days will still be missing, tour operators say.

It’s a bitter disappointment for many businesses that had been hoping lean pandemic times were over after Beijing relaxed restrictions on travel and stopped requiring weeks-long quarantines. Still, bookings for overseas travel have skyrocketed, suggesting it’s only a matter of time until the industry recovers. 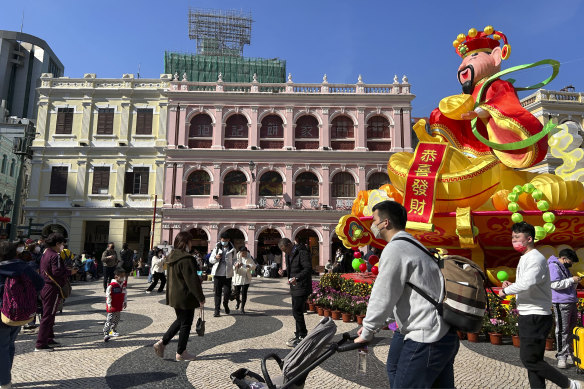 Travellers from mainland China walk around Senado Square, a tourist destination in Macao, on Wednesday.Credit:AP

“I think the tourists will return around the end of February or early March at the earliest,” said Sisdivachr Cheewarattaporn, president of the Thai Travel Agents Association, noting that many Chinese lack passports, flights are limited and tour operators are still gearing up to handle group travel.

COVID-19 risks are another big factor as outbreaks persist following the policy about-face in China, he said in an interview. “People are possibly not ready, or just getting ready.”

For now, the Chinese territories of Macao and Hong Kong appear to be the most favoured destinations. 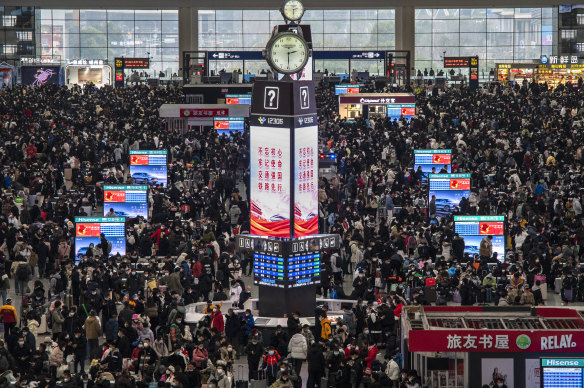 Travellers crowd at the gates and wait for trains at the Shanghai Hongqiao Railway Station during the peak travel rush for the upcoming Chinese New Year holiday on January 15.Credit:Getty

Just days before Sunday’s start of the Lunar New Year, iconic tourist spots in the former Portuguese colony, like historic Senado Square and the Ruins of St. Paul’s, were packed. Gambling floors at two major casinos were largely full, with groups of Chinese visitors sitting around the craps tables.

“I’m so busy every day and don’t have time to rest,” said souvenir shop owner Lee Hong-soi. He said sales had recovered to about 70-80 per cent of the pre-pandemic days from nearly nothing just weeks ago.

Kathy Lin was visiting from Shanghai, partly because it was easy to get a visa but also because she was concerned about risks of catching COVID-19. “I don’t dare to travel overseas yet,” she said as she and a friend took photos near the ruins, originally the 17th century Church of Mater Dei. 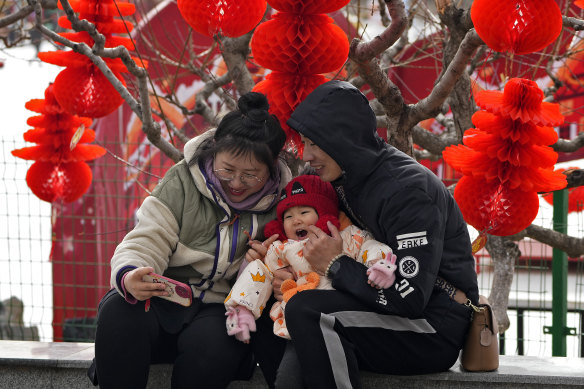 A couple take a selfie with their toddler in front of Lunar New Year decorations at a public park in Beijing on Thursday. Credit:AP

That worry is keeping many would-be holidaymakers at home even after China relaxed the zero-COVID restrictions that sought to isolate all cases with mass testing and onerous quarantines.

“The elderly in my family have not been infected, and I don’t want to take any risks. There’s also the possibility of being infected again by other variants,” said Zheng Xiaoli, 44, an elevator company employee in Guangzhou. Africa was on her bucket list before the pandemic, but despite yearning to travel overseas, she said, “there are still uncertainties, so I will exercise restraint”.

Cong Yitao, an auditor living in Beijing, wasn’t worried about catching the virus since his whole family has already had COVID. But he was put off by testing restrictions and other limits imposed by some countries, including the US, Japan, South Korea and Australia, after China loosened its pandemic precautions.

“It looks like many countries don’t welcome us,” said Cong, who was instead planning to head for a subtropical destination in China, like Hainan island or Xishuangbanna, to enjoy some warm weather. 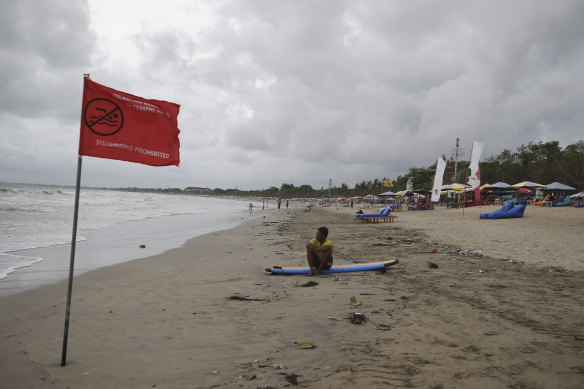 A man sits on a surfboard at Kuta beach in Bali, Indonesia, on Thursday. A hoped-for boom in Chinese tourism in Asia over next week’s Lunar New Year holidays looks set to be more of a blip.Credit:AP

According to Trip.com, a major travel services company, overseas travel bookings for the January 21-27 Lunar New Year holidays were up more than five-fold. But that was up from almost nothing the year before, when China’s borders were closed to most travellers.

Reservations for travel to South-east Asia were up 10-fold, with Thailand a top choice, followed by Singapore, Malaysia, Cambodia and Indonesia.

Travel to other favourite places, like the tropical resort island of Bali and Australia, has been constrained by a lack of flights. But that is changing, with new flights being added daily.

“You will see an increase, certainly, compared with last year, when China was still closed, but I don’t think you will see a huge surge of outbound travellers to different destinations within Asia-Pacific, let alone Europe or the Americas,” said Haiyan Song, a professor of international tourism at Hong Kong Polytechnic University.

Tourism Australia forecasts that spending by international travellers will surpass pre-pandemic levels within a year’s time. Before the disruptions of COVID-19, Chinese accounted for almost one-third of tourist spending, nearly $US9 billion (about $13 billion today).

Bangkok’s Suvarnabhumi Airport has increased staffing to cope with more than 140,000 arrivals a day during the Lunar New Year rush, though only individual Chinese travellers will be coming now — group tours from China have yet to resume.

As a brilliant orange sun set behind ancient Wat Arun, beside Bangkok’s Chao Phraya river, a Shanghai man who would give only his surname, Zhang, posed with a companion in colourful traditional silken Thai costumes.

“It’s very cold in China, and Thailand has summer weather,” said Zhang, adding that he knew many people who had booked tickets to get away from his hometown’s cold, damp weather.

Still, for many Chinese, the allure of world travel has been eclipsed, for now, by a desire to head to their hometowns and catch up with their families, nearly three years exactly since the first major coronavirus outbreak struck in the central city of Wuhan in one of the biggest catastrophes of modern times.

Isabelle Wang, a finance worker in Beijing, has travelled to Europe, the Middle East and parts of Asia. After three years of a slower-paced life during the pandemic, her priority is to be reunited with her family in Shangrao, a city in south-central China.

“There’s still a lot of time remaining in our lifetimes, and there will certainly be opportunities to go abroad later when we want to,” she said.

Ashley I. & Jared Addressed How Being Friends First DEFINITELY Benefitted Their Relationship