Washington: A mysterious man wanted in connection with the downing of Malaysia Airlines flight MH17 over eastern Ukraine in 2014 appears to be a high-level Russian military intelligence officer, an investigation by a team of reporting outlets has found.

The reporting team, made up of the McClatchy media group owner of the Miami Herald, and investigative websites Bellingcat in London and The Insider in Moscow, identified the man, previously known only by his call sign Orion, as Oleg Vladimirovich Ivannikov. 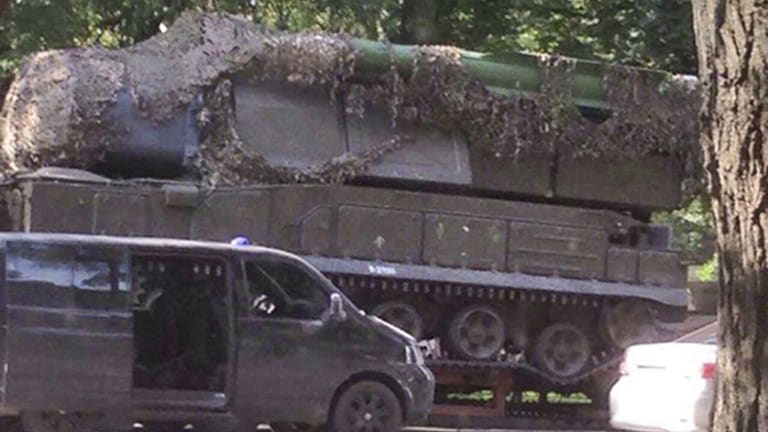 An image of Buk-Telar missile launching system probably taken on July 17, 2014, in the town of Makeevka, Ukraine. The JIT presumes that the picture contains the BUK-Telar responsible for downing MH17.

Information about Orion has been long sought by a five-nation Joint Investigation Team conducting a criminal probe of the tragedy. 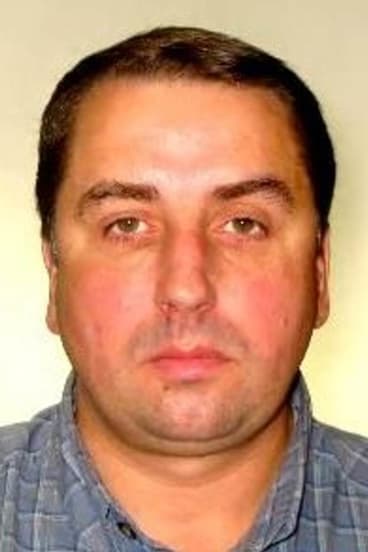 An independent investigation has named Russian military adviser Oleg Vladimirovich Ivannikov as a person of interest in the downing of MH17.

That body, citing several unique markers on photographs of a Russian BUK launcher taken in the border area near the wreck, on Thursday formally accused a specific division – the 53rd anti-aircraft brigade from Kursk – of the Russian military of bringing down the passenger aircraft, killing all 298 aboard. The head of The Netherlands' National Investigation Service called on witnesses to help identify those who gave orders.

"Who formed part of the crew? With what instruction did they set out? Who was responsible for the operational deployment of this" missile launcher, Wilbert Paulissen asked.

The July 17, 2014, missile strike on a plane full of passengers from 17 countries flying above 30,000 feet from Amsterdam to the Malaysian capital of Kuala Lumpur shocked the world. Ukrainian leaders blamed Russia or ethnic Russian separatists. Thirty-eight Australians and Australian citizens were among the 298 people killed. 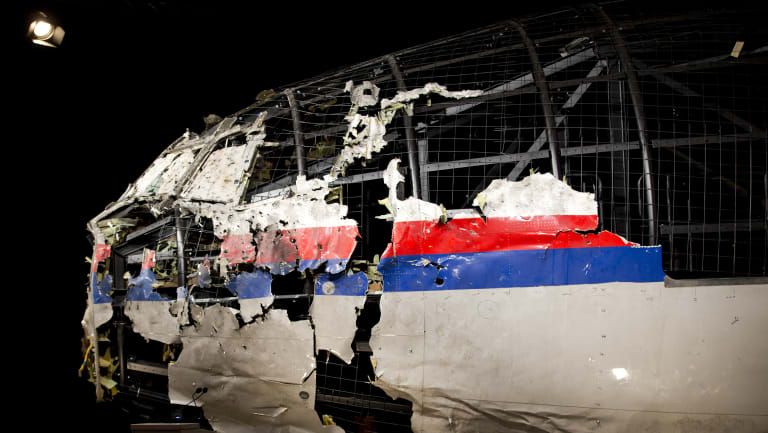 Since the five-nation team hopes to bring criminal charges, identifying the chain of command in the plane's downing is vital. Made up of representatives from the Netherlands, Ukraine, Malaysia, Belgium and Australia, the team did not know Orion's identity on Thursday when pinning the missile strike on Russia.

Orion was captured on mobile phone intercepts with a semi-retired three-star Russian major general who used the call sign Delfin on the day of, and in the days after, the shootdown. A report published last December by the collaborating news outlets identified Nikolai Federovich Tkachev as Delfin, the general and one of two senior officers who oversaw the movements of the BUK rocket launcher.

In the intercepts, Orion and Delfin discuss transport of equipment such as trailers across the border without mentioning BUKs. Orion complains that the military men bringing the trailers were using a map of Ukraine from 1982. 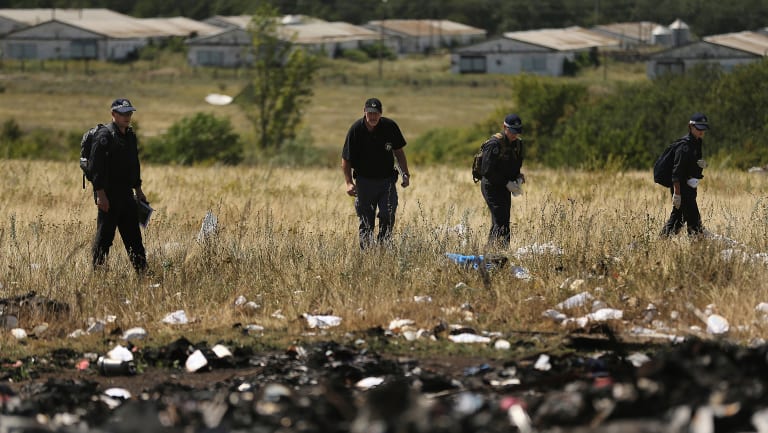 Australian Federal Police and their dutch counterparts search the MH17 crash site for human remains in 2014.

However, the day after the shootdown, the Ukrainian security service published an intercept dated two days before the incident in which Orion explicitly says "we got a BUK now … so we start shooting the hell out of their planes."

When a member of the reporting team called Ivannikov for comment, a relative said to call back later in the day. But Ivannikov refused to come to the phone later.

Reporting partners have determined with a high degree of probability that Orion is the Russian citizen Ivannikov, born in 1967 in what was East Germany, the son of a decorated Soviet major general.

Ivannikov's true name has remained hidden in part because, like other Russian officers in the GRU military intelligence unit, he does not operate under his true identity. 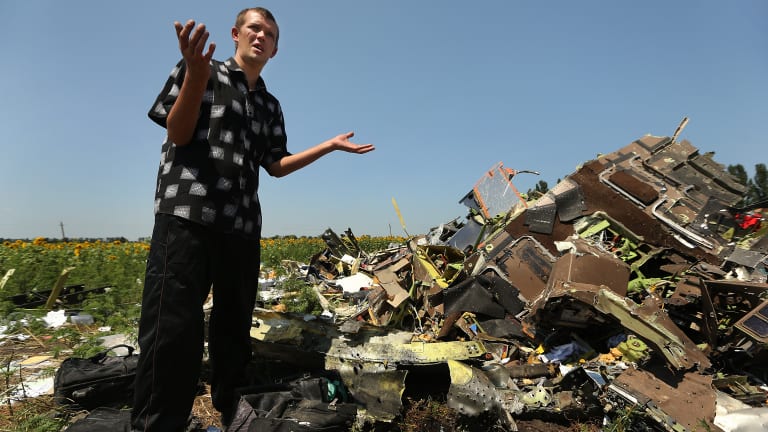 Instead, Ivannikov appears to have been using an alternate identity: Andrey Ivanovich Laptev. Under that assumed name, he helped lead an uprising of ethnic Russians in South Ossetia, a breakaway region of the former Soviet republic of Georgia. He was effectively part of what would become a private Russian shadow army that later fought in Ukraine and even later in Syria, where they took a strike in February from US warplanes.

Several English-language publications and books reference a man known as Andrey Laptev as having first been the chief of staff for a South Ossetian security council from 2004 to 2006 and then until 2008 serving as "defence minister" for separatist forces in the self-proclaimed Republic of South Ossetia.

Yet Laptev appears in no photographs from the breakaway region, though the conflict stretched over more than four years. He has virtually no internet or social-media footprint under that name.

About the time Laptev/Ivannikov was last linked to South Ossetia in 2013, ethnic Russian separatist activity in eastern Ukraine flared. And that's where Orion, or Andrey Ivanovich, came into view.

In September 2016, the Dutch-led Joint Investigation Team released what it said were telephone intercepts of two Russian speakers – Delfin and Orion – and asked for the public's help in learning their true identities.

The Russian newspaper Novaya Gazeta in July 2015 concluded that based on interviews with former separatists, Orion was a Russian military adviser. And since such advisers don't operate in war theaters under their real names, it has been assumed Andrey Ivanovich was an alias.

The break in identifying Orion came through mobile phone data, obtained by Bellingcat, that contained the mobile number Orion used in one of the intercepts. There were "hits" for this number in two publicly available phone-sharing apps. (Bellingcat's longer report provides greater detail.)

Additionally, the number associated with "Ivannikov" appears in an online telephone database and on a now-defunct e-commerce website that left its customer and order data exposed. On that website, the same phone number appears in a customer profile of "Oleg", who ordered an "elevation training mask".

A reporter from The Insider went to the delivery address listed on the order; it didn't exist. But the road continued under another name, and the street number corresponded to the entrance to the Main Intelligence Directorate of the GRU.

That Moscow address – Khoroshevskoye Shosse 76, Khodinka – is the same one listed in sanctions paperwork issued by the US Treasury Department on December 29, 2016, as part of the Obama administration's retaliation for Russia's meddling in the US elections.

The reporting partners also traced the same mobile phone number to a dwelling across from a military intelligence institute; the structure appears on the social-media profile of one of Ivannikov's relatives living at the same address. 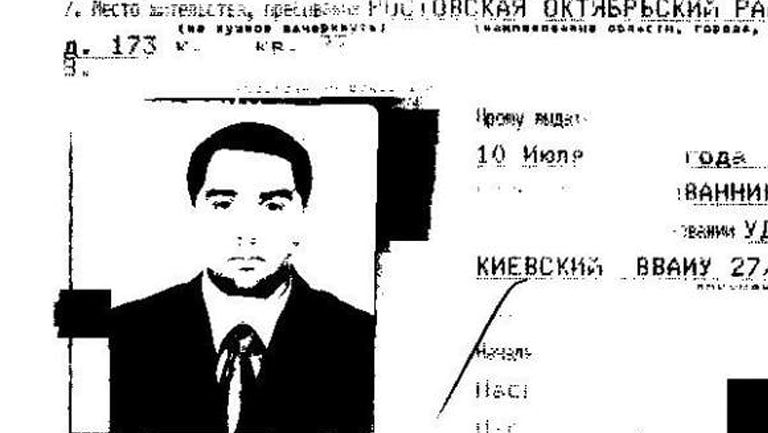 Oleg Vladimirovich Ivannikov has been named as a person of interest in the downing of Malaysian Airlines flight MH17.

Automobile registration records dating back 15 years from Rostov-on-Don, almost 1000 kilometres straight south of Moscow, helped to confirm other key details about Ivannikov's past. Passport records in Russia show he graduated in 1988 from the Kiev Military Aviation Engineering Academy in what today is Ukraine.

Other documents obtained by the reporting team show Ivannikov got a post-graduate degree in 1990 from the academy's rocket division and in 2008, after leaving South Ossetia, wrote a PhD thesis about information warfare at the Southern Federal University in Rostov-on-Don.

The reporting team also secured two photos of Ivannikov, one from 2012 and one from his 2003 passport application.

In the reporting team's previous stories, intercepts were compared against videos or secretly recorded conversations to determine high likelihoods of a match. In the case of Ivannikov, the University of Colorado, Denver's Centre for Media Forensics determined intercepts were too short or too noisy for proper comparison.

Among the factors pointing to Laptev/Ivannikov, however, is the fact that he has an unusually high-pitched voice that can make it difficult to tell if a man or woman is talking.

The Insider confirmed with a former member of the breakaway South Ossetian government that the man they knew as Laptev had an unusually high-pitched voice. Another source in the region, who insisted on anonymity fearing reprisals, confirmed a photo of Ivannikov was the man he knew as Laptev.

In addition, Ivannikov prides himself as an academic. In July 2012, under his real name, Ivannikov became a director of the Russia-Caucus Research Centre, part of the International Institute of the Newly Established States.

That Moscow-based think-tank publishes papers supportive of Russia's sphere of influence over its many neighbours. Ivannikov has published more than 20 papers, which often cite his role as a "military expert". Another director of the centre was a Pole arrested at home for spying for Russia.

As the reporting team neared conclusion of this report, references to Ivannikov on the think-tank's website, along with his articles, suddenly disappeared. An archived index of his writing can still be accessed.

A former high-level Kremlin official, demanding anonymity for fear of the Kremlin's long reach, told McClatchy the tale of Orion/Laptev/Ivannikov should help open eyes about how Russia pursues its interests abroad.

"People in the West just don't have a clue," said the former official.

John Legend Will Live-Stream a Free Concert From Home

Who is Great British Bake Off contestant Rowan?