Rwanda asylum seeker flights will be delayed to late autumn at the earliest: European judges throw out Priti Patel’s challenge to their 11th hour legal block

The first flights transporting migrants to Rwanda will be grounded until late autumn at the earliest after European judges upheld a legal block.

The European Court of Human Rights, whose 11th-hour intervention halted the first jet from taking off seven weeks ago, has now thrown out a formal challenge by Home Secretary Priti Patel.

It means any new attempt to send migrants to the African country from the UK is unlikely to take place before November. It comes after Miss Patel made submissions to the Strasbourg court asking judges to quash its decision to issue an injunction barring the removal of the migrants.

But an anonymous official has confirmed judges have decided to ‘maintain the interim measure’. 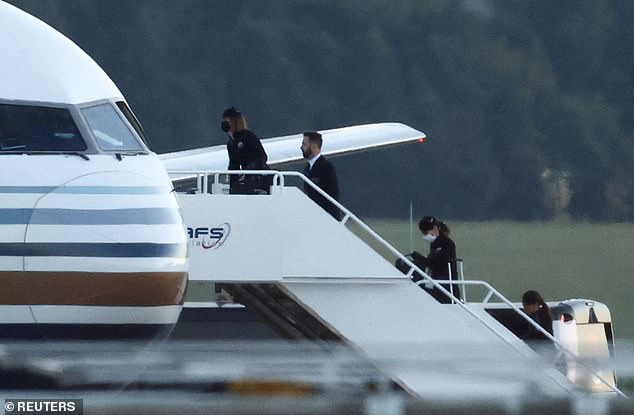 Crew members board the jet at Boscombe Down, Wiltshire hours before its halting by judges

Last night Miss Patel said she was ‘disappointed’ by the decision, insisting she will not be deterred from delivering on the policy.

It emerged 696 migrants arrived in the UK from the Channel on Monday – the highest number in a single day so far this year.

The total number to have crossed since the start of the year now stands at 17,095, not including an unconfirmed number who reached Kent yesterday.

Ministers believe that if Strasbourg judges had agreed to cancel the injunction – known as a Rule 39 order – the Home Office would have been able to proceed with a second attempt at removing migrants to the Rwandan capital Kigali on a charter plane. 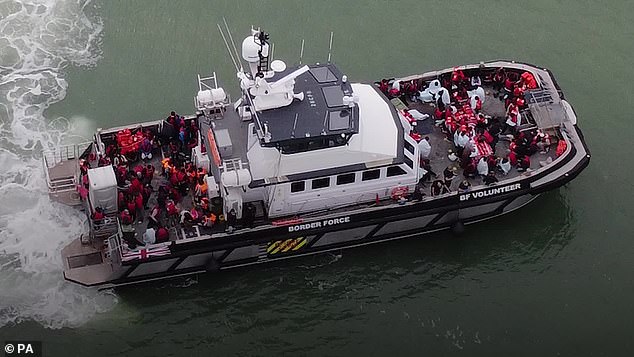 Almost 700 migrants crossed the Channel on Monday, the highest number on any day this year

A series of senior British judges refused to intervene to block the removals earlier this year, so campaigners against the policy –including the trade union representing thousands of the Home Office’s own Border Force officers – were only able to thwart removals flights when they went to the European Court. After the decision to uphold the judgment, Miss Patel said she ‘will not be deterred from delivering on this policy which is an essential part of our wider plans to break the business model of people smugglers who exploit people for profit’. A Home Office source added: ‘The European court’s original decision came in so late at night and was so rushed, we felt it had not been a proper consideration of the facts… We had asked them to look again at the specific cases and properly consider what British judges had ruled. But they have effectively replied “Thanks but no thanks”.’

The Rwanda deal, signed in April, will transport potentially thousands of migrants who arrive in the UK through ‘irregular’ routes, such as across the Channel in small boats, to the east African nation to claim asylum there.

Justice Secretary Dominic Raab has already set out new legal changes in the Bill of Rights, which is currently going through Parliament, which say ministers can disregard Strasbourg interim measures, such as Rule 39 orders.

Urgent Android alert as terrifying bug is back! Delete these apps now