This is the shocking moment a driver hit a moped rider with a hammer during a road rage row.

A motorist lashed out at the scooter’s owner, swinging the weapon toward his head in Camberwell, south-east London.

Sickening footage of the scrap was uploaded to The UK Motorcycle Theft Protest Community Facebook page.

It captures a woman’s screams as she begs the pair to stop grappling in the street after they squared up to one another.

Video shows the car’s occupant hitting the moped with a hammer before its owner grabs hold of him.

The car driver lashes out with the hammer and it comes crashing down on the rider’s helmet.

He then hits back by shoving one of the car’s open doors forward in an apparent attempt to tear it from its hinges. 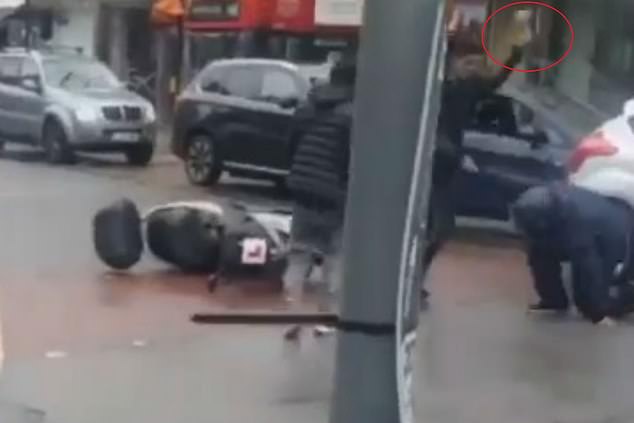 The clip surfaced on Friday, with witness Salih Salih, claiming the fight had happened ‘minutes’ ago.

Richard Lacey wrote under the post: ‘This country is messed up with theft and violence and only getting worse and that is a very big worry’.

Matthew Gosling said: ‘Just looks like road rage to me. But could have another motive. But the way they just drove off calmly looked more like road rage.’

Keith Hillier wrote: ‘This is happening all too often. The streets aren’t safe anymore, bikes are being stolen and people and couriers are being attacked. Lawless Britain. What sad times.’ 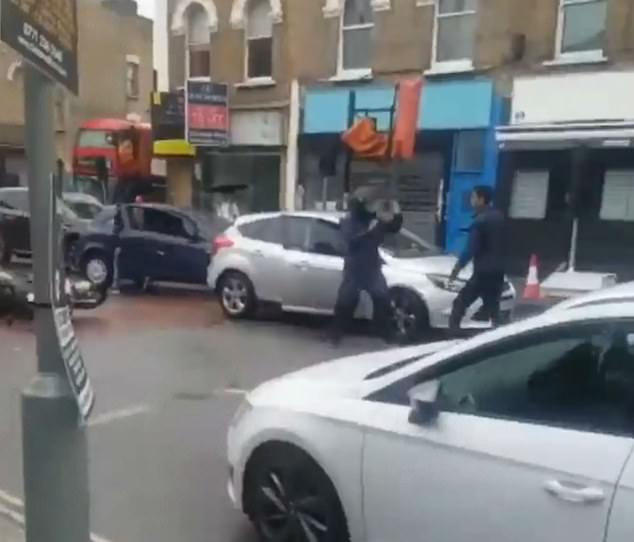 Pictured: The pair square up to one another in south-east London as the row escalates into a fight

Al Wansboro added: ‘London has fallen.’ Jan Sutcliffe posted: ‘Lawless Britain and it’s gonna get worse unless the law rein these scum in’.

Mr Salih said he saw the argument break out when he was closing up at the nearby Rock Steady Eddie’s cafe.

‘The incident took place on the Friday,’ he said. ‘There was a lot of noise and screaming.

‘I saw the motorbike on the floor and two men confronting each other before the car drove off. It looked like a road rage incident.’

Super Micro Speaks Out On The Bloomberg Spy Chip Story

Venus In Gemini Is Making You Irresistible, So Ask Out Your Crush Now

Alex Scott: ‘That’s all I can say’ The One Show presenter shares rare love life admission