Reactions to the suspension of parliament as a respectful pause following the death of Australia’s head of state, Elizabeth II, varied. 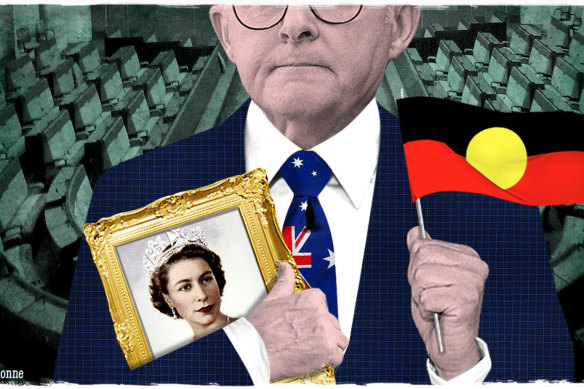 Suspending parliament to mourn the Queen was a clever strategy with long-term dividends. Illustration: Dionne GainCredit:

But Prime Minister Anthony Albanese was right to suspend parliament after the Queen’s death.

Labor is meticulously following the inherited plan for monarchical regime change in Britain, and therefore Australia, and pushing out engagement on an Australian republic beyond this parliament, for sound political reasons.

This is despite shock experienced by many when this translated into the Australian parliament being shuttered and vice-regal representatives proclaiming “faith and obedience” to King Charles III on our behalf. Obedience!

From Federation in 1901 onwards, Labor has been under pressure to demonstrate its fitness for government. In the beginning it was jibes about whether the workers’ parliamentary representatives would know how to dress properly, speak properly, use their cutlery properly, and other class-based barbs. 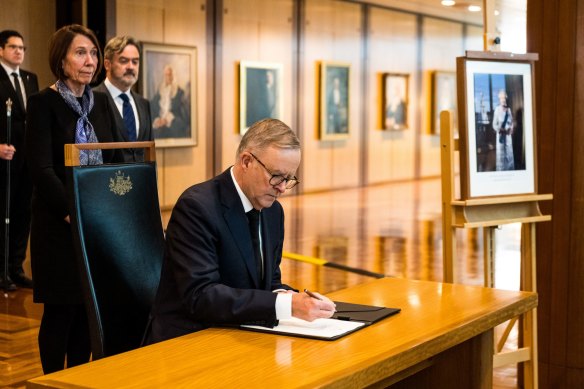 These days it’s whether Labor can be trusted in government to be responsible, to “do the right thing”.

Albanese is making the mourning protocols an object lesson in Labor fealty to tradition. Against the backdrop of the norm-breaking, convention-flouting Morrison government, this has not just historical but contemporary resonance.

The question quickly arose, though, was Albanese going too far?

ABC journalist Laura Tingle queried on the weekend, for example, why Australia’s parliament was suspended for a fortnight while the British parliament was still sitting, albeit only for condolence speeches on the Queen’s death. 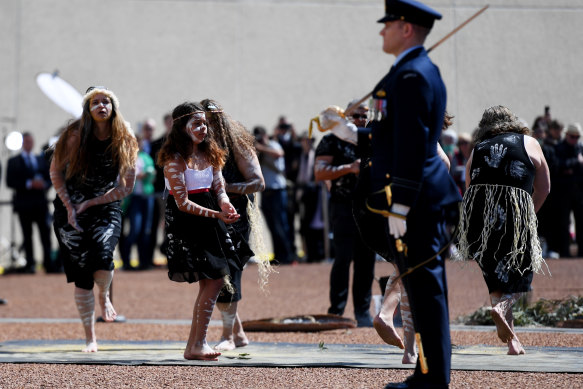 Members of the Yukembruk dance group perform at the proclamation ceremony in Canberra.Credit:Getty

“Why couldn’t parliament today and tomorrow have been put aside for condolence motions now,” Tingle asked Albanese directly at a press conference on Monday. “That’s what the British parliament has done.”

“I think that we have seen enough of breaches of protocol and arrangements and conventions,” Albanese said. “I intend to act in accordance with the advice, I have done that.”

Albanese tying Labor to tradition in this way, symbolically occupying the middle ground and not just the left of centre, has vast potential dividends for the government for which incredulity among some of its own supporters is a small price to pay.

That’s because if you want to make really significant changes while in office, building and banking trust among centrist voters makes those big changes far more achievable. Big changes like a First Nations Voice to parliament, and transforming our nation from a constitutional monarchy with a foreign head of state to an independent republic with an Australian head of state.

The incredulous are being asked to trust Albanese’s strategic judgment that his “hasten slowly” approach is the one most likely to succeed.

Albanese is smart not to make the achievement of a First Nations Voice riskier by moving at the same time to develop a republic proposal in the wake of the popular Queen’s death.

Careful sequencing, achieving the Voice in this term of office and the republic later – by implication in the government’s next term – makes sense.

The alternative “crash through or crash” approach would be more exciting. But if you want results, tactical cunning wedded to good strategy and sensible timing is the way to go. With Albanese embracing opportunities to position Labor as respecters of norms and conventions, he is building goodwill and sense of security among those centrist voters needed for the incredibly difficult task of winning referendums in Australia.

Toey republicans would do well to recall the nastiness of the 1999 republic referendum campaign.

When Labor does put the republic back on the active agenda, some of the old stagers will be back, including arch monarchist Tony Abbott whose “you can’t trust politicians to select a president” line had such a devastating effect.

The next republic referendum campaign has to anticipate and negate attack lines like this which this time round will be harnessed to nefarious effect on social media. It will be like the 1999 Tony Abbott on social media steroids.

The UK Labour Party has had a pro-monarchy position reaching back to the post-World War II Labour government of Clement Attlee.

Belief in constitutional monarchy as a bulwark against the rise of extremist government is the main reason. Attlee and later Labour prime ministers did not see it as an impediment to pursuing social democratic ends.

It’s different in Australia where the constitutional monarch is not one of us, and where we risk being an embarrassing case of arrested development, still tied to “home” at the advanced age of 121 years old.

Australian Labor showing you don’t need to be against the British monarchy to be for a federal republic of Australia will be helpful to making the eventual case that, for an Australian republic, it’s time.

Meanwhile, Albanese’s decision to suspend parliament represents a real risk to his overriding goal that Labor be seen to keep its election pledges.

Crossbenchers fear the suspension of parliament will mean there’s not enough time to debate and pass the government’s imminent independent integrity commission bill properly before Christmas. They have framed this as a potential broken promise in the making.

Albanese counters that Labor promised to introduce the bill before the end of the year but not necessarily pass it by then. He cites in his defence, too, Attorney-General Mark Dreyfus’ repeated meetings with crossbencher Helen Haines and other interested parties, and to additional parliamentary sitting days scheduled to make up for lost time.

It’s safe to predict no amount of time for debate on the bill be considered enough, and that if the bill is to pass this year it may not fulfil every item on the community independent’s wish list.

But won’t there be glad tidings if parliament gives us an independent federal watchdog in time for Christmas.

Singer, 26, ‘forced to leave’ pool because her bikini was ‘inappropriate’

Lili Reinhart Just Came Out as a ‘Proud Bisexual Woman’